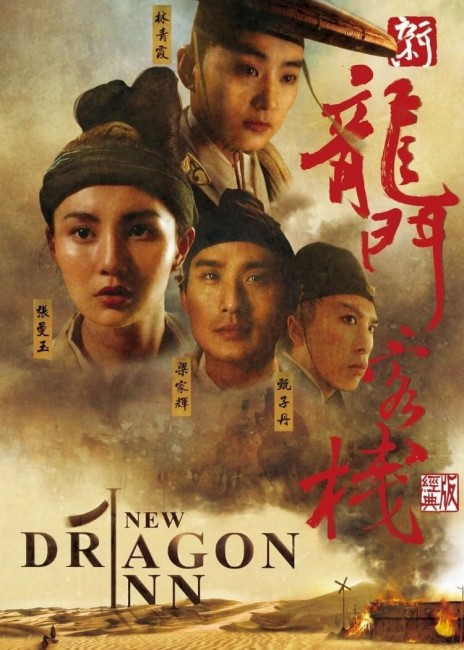 Chiao Siu Hing, head of Dong Chang, the imperial secret service, is taking control of the empire, executing those loyal to the emperor. To put down the revels, Chiao plans a trap using two children of one of the executed ministers. Instead the children are rescued by the rebel Yau Mo-yan who disguises herself as a man. Mo-yan takes refuge at the inn in the desert near the Dragon Gate Pass. The Dragon Gate Inn is run by Gam Seung Yuk who pretends to seduce patrons only to kill and rob them. At the same time, rebel leader Chow Wai-on arrives and Gam decides she wants him for real but he loves Mo-yan. At the same time, the pursuing Dong Chang soldiers arrive determined to eliminate the rebels.

Variously known as Dragon Inn and New Dragon Gate Inn, this is a classic of 1990s Wu Xia. It was a remake of an earlier film Dragon Gate Inn (1967) by King Hu, which is regarded as a classic of the embryonic Wu Xia genre – see Wu Xia Cinema. The film is written and produced by Tsui Hark, one of the legends of Hong Kong fantastic cinema (see below for Tsui Hark’s other films). Tsui himself later conducted a further remake with Flying Swords of Dragon Gate (2011).

The film was highly celebrated in its day for its swordplay. This is expectedly good, although there were other works around the same time I feel that did this better – Tsui Hark’s Once Upon a Time in China (1993) and Woo Ping-yuen’s The Tai Chi Master (1993). From the very opening scene, the film looks epic in quality in terms of what mid-1990s Wu Xia was offering – all shots with armies of riders on a plain and parading in front of the palace. When it choreographs scenes of combatants fighting and using all the impossible high-flying, ceiling dancing, mid-air twirling moves of the genre, New Dragon Gate Inn is great.

One of the most appealing scenes in the film is the fight between Maggie Cheung and a bathing Brigitte Lin, which becomes all twirls of cloth whipped off and on, used to throw others to the ceiling and the like, at the same time as the camera is coyly placed Austin Powers-style to avoid any actual nudity. The film reaches a great climactic battle with swordsmen mounted on horseback charging into the inn followed by a swordfight in the midst of a sandstorm in the desert. There’s an entertainingly ridiculous finale with the chef whittling villain Donnie Yen’s foot and arm down to the bone and Yen still fighting on, wrapping the swords of attackers around his arm and swinging the chef around his head on the tip of his sword.

On the other hand, the film never fully sustains the pace of these scenes. It comes with much more in the way of plot than you usually get in this genre. Although watching the film through subtitles, it can be difficult trying to keep track of who belongs to which faction and is fighting whom. The action scenes are interspersed with much in-manoeuvring between parties. It can often be a reasonable wait before the film returns to the action.

The film has a large cast from Hong Kong stars of the day. Brigitte Lin does about her 203rd role where she is a woman disguised as a man. I am not a big fan of Maggie Cheung’s petulant and pouty girlishness, which seems to be about the only mode she is afforded throughout the film.

Director Raymond Lee has made assorted other swordsman, action and crime films. His other genre entries include:- the horror film Fatal Obsession (1994) and as co-director of the Tsui Hark-produced Wu Xia Swordsman III: The East is Red (1993).