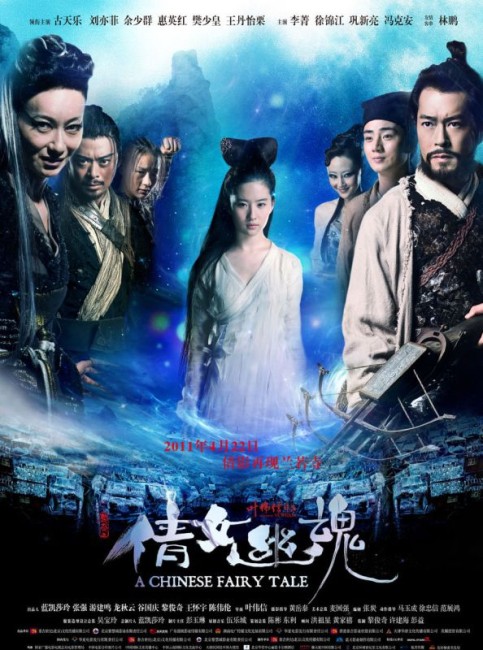 aka A Chinese Fairytale

The tax collector Ning Tsai Shen comes to Black Mountain Village. After stopping to drink from the town’s well, he is arrested by the villagers for stealing their dwindling supplies of water and is just about to be executed when it is discovered who he is. The villagers then decide to send him up the mountain along with a party of convicted murderers to see what can be done about the drought. The group stop for the night at the Lan York Tse temple, only for the other men to be wooed away by women who are in fact demons that suck out their lifeforce. Ning Tsai Shen meets the lovely Nieh Hsiao Tsing, unaware that she is also one of the demons. The two are attracted and she tries to protect him from the wrath of the tree demon Lou Lou who keeps them all in thrall. Ning Tsai Shen tries to take her away from the mountain with him. At the same time, Yin Che Hsia, a demon hunter who previously loved Nieh Hsiao Tsing but chose the path of forgetting, comes hunting her, only to start to remember the love they shared.

The Hong fantasy genre faded away by the end of the 1990s but soon found a new revival in the 2000s following Hong Kong’s incorporation with China with successes such as Crouching Tiger, Hidden Dragon (2000) and Hero (2002), which remade the old Wu Xia films employing much more lavish budget and CGI effects. Amid these, this was the inevitable remake of A Chinese Ghost Story.

The remake comes from Yip Shai Wun, better known back during the original Hong Kong cycle as Wilson Yip. Yip has been directing since the 1990s and has delved into Wu Xia on several occasions with the likes of 2002 (2001), The White Dragon (2004) and Dragon Tiger Gate (2006), as well as delivered several other genre films such as the ghost comedy 01:00 Am (1995), the horror anthology Midnight Zone (1997), the horror comedy Bio-Zombie (1998), the fantastical action film Skyline Cruisers (2000) and the comedy The Mummy, Aged 19 (2002). The greatest successes he has enjoyed came with the popular martial arts biopic Ip Man (2008) and several sequels to it. At the same time as he took on A Chinese Ghost Story, Yip also rebooted the popular Happy Ghost series with Happy Magic/Magic to Win (2011).

The original A Chinese Ghost Story was a classic for a number of reasons. One of these was it was such an insane film to discover – monks and callow young tax collectors going into battle with giant trees and demons the size of houses, combatants flying through the air and bouncing of trees while wielding prayers on pieces of paper and other aspects of Eastern religion, all combined with some of the wildest and most way-out action poses.

When it comes to A Chinese Ghost Story 2011, the immediate disappointment is that these have been replaced by CGI effects. In the original, which predated the CGI era, the amazement was that all of these were being conducted by wirework and physical effects. There seems something just too easy and unimaginative about seeing them being conducted by CGI. Moreover, despite technical advances of nearly twenty-five years, A Chinese Ghost Story 2011 does them umpteen times less imaginatively than the original did. It only emphasises how little this comes anywhere near approaching the original. The remake conducts a few flying, bouncing moves but these are desultory. The problem is that since the original came out these have become a regular part of Chinese fantasy cinema and are no longer remarkable. In other words, we have gone from a groundbreaking work to one that has simply rehashed moves from every other film in the genre.

It is hard to say what a thorough and utter disappointment the remake is. Yip Shai Wun fails to replicate almost everything that Ching Siu-Tung blew our minds with in the original. There is a disappointing lack of giant tongues, monster trees, journeys down to Hell, demons, prayer incantations and so on. Being made under Chinese aegis, the state enforces its official atheism on filmmakers and so the monk character is no longer a monk, just a random wandering savant with mystical knowledge, there are no magical prayers, no journeys down to or even mention of Hell, while even the quest to recover the heroine’s ashes so that she can reincarnate has been excised. A perfect example of the gulf between the two works is the scene from the original where Joey Wong gets Leslie Cheung to hide from the matron by shoving him down between her legs under the water of her bath with a scene here where Yu Siu Kwan merely tries to hide Liu Yi Fei from her sisters by telling him to pretend to be dead.

Indeed, when it comes to the remake, Yip Shai Wun seems less interested in blowing our minds with martial moves than he is in the romance. He piles on the hyper-realised CGI-enhanced beauty – dreamy autumnal leaves blowing, pinker than pink blossoms – to a point that starts to seem self-parody. Liu Yi Fei looks and is dressed almost a dead ringer for Leslie Cheung in the original. But even this is misconstrued. The original had a neat trio of characters – tax collector Leslie Cheung, his romance with ghost girl Joey Wong and Wu Ma as the Buddhist monk savant. Here the remake screws with that. We get the tax collector and ghost girl but the film then decides to write a backstory for the monk and turn the simple love story between the other two into a triangle where the monk was the ghost girl’s love but elected to accept forgetfulness and, in the process of combatting her, comes to remember the past. After this point however, the monk becomes the central character of the film and the romance turns into one between him and the ghost girl, while the tax collector is almost entirely sidelined. With the monk no longer the one that is doing much of the fighting, the film has to introduce a brother and sister to the equation to take on the matron.