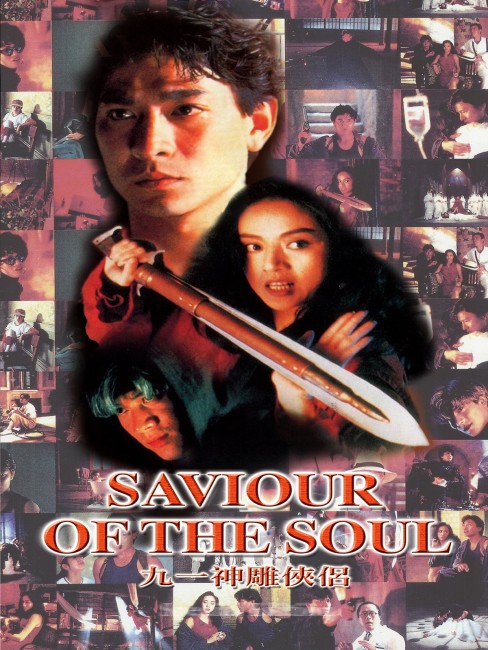 The dying master assassin Eagle asks his pupil Fox to take revenge against Yo May-Chun who was responsible for blinding him. Yo May-Chun works as a law-enforcement official along with her partner Chin. Chin tries to propose to May-Chun but she decides to leave following a fight with Fox that kills another officer. Chin follows her to New York. There Fox uses Terrible Angel, a vial of gas that allows him to pass through May-Chun’s body and absorb her soul. Chin learns that the only way to save May-Chun is with the ice water from the Pet Palace. However, he has insulted the Pet Lady by spurning her attentions and she refuses him. Chin must fight off Fox’s continued attacks and find a means to save May-Chun.

Saviour of the Soul is an entry in Hong Kong’s Wu Xia cycle. This genre was largely begun with Tsui Hark’s Zu: Warriors from the Magic Mountain (1983) and continued through efforts such as Mr Vampire (1985), Swordsman (1990), The Bride with White Hair (1993), Green Snake (1993), The Magic Crane (1993), The Storm Riders (1998), A Man Called Hero (1999) and the international success of A Chinese Ghost Story (1987). These welded the Shaw Brothers kung fu films of the 1970s to increasingly wilder and more fantastical plots, often winding in elements of Eastern religion to create a unique genre of its own. It was not until Crouching Tiger, Hidden Dragon (2000) that such moves were popularised and copied in the West.

The screenplay for Saviour of the Soul comes from Wong Kar-Wai who made a breakout as director a couple of years later with the acclaimed Chungking Express (1994) and subsequent arthouse hits like In the Mood for Love (2000) and 2046 (2004). It is never always entirely clear what is going on in. Essentially, the film has been conceived as a series of visually dazzling acrobatics and aerobatics, all co-directed by master Hong Kong fight choreographer Corey Yuen, also the director of the likes of The Transporter (2002) and DOA: Dead or Alive (2006).

Things kick in from the breathtaking opening sequence that has Aaron Kwok blasting into a high-security area bouncing machine-gun bullets off his sword, spinning through the air like a drill bit with bullets bouncing off his cloak, vertically hacking people and chopping the tops of heads off, and impaling three people on his sword at once. The entire film is filled with amazing set-pieces like this. There is a fight sequence in a bathroom with people being blasted through the cubicles, swinging up and around the roof to avoid sword blades and riding on the backs of other people on cubicle doors. Or an amazing sequence that contrives to use a yo-yo and a sword with a blade made out of a wafer-thin sheet of metal as weapons. The film even manages to make a sequence with the potentially risible notion of people fighting a flying full-length mirror into something gripping.

Saviour of the Soul adopts a wholly fantastical setting and makes no attempts at realism – traditional swordplay sits alongside modern guns, while there is a temple like something out of dynastic fantasy amid the modern city setting, or when a moon rises in the background of a shot it is a full moon that fills nearly a quarter of the sky.

The film also has the sappy adolescent slapstick common to much of Hong Kong cinema – particularly in regard to May-Chun’s sister Hwa-Shang (Gloria Yip) who is always having doors slammed in her face, picking up the iron when she answers the phone and the like. This is at its most amusing when we hear things narrated from her point-of-view, interpreting her combat training as romance – how she talks of their first holding of hands and the film cuts to them arm-wrestling, and the like.

Saviour of the Soul 2 (1992) was a sequel also from directors David Lai and Corey Yuen and featuring a return performance from Andy Lau.

Director Corey Yuen has gone onto become one of the top Hong Kong action coordinators. He has also directed (or co-directed) other genre films such as No Retreat, No Surrender (1986), Ghost Renting (1991), The New Legend of Shaolin (1994), The Avenging Fist/Legend of Tekken (2001), and DOA: Dead or Alive (2006). In more recent years, he had a hit with the action film The Transporter (2002).