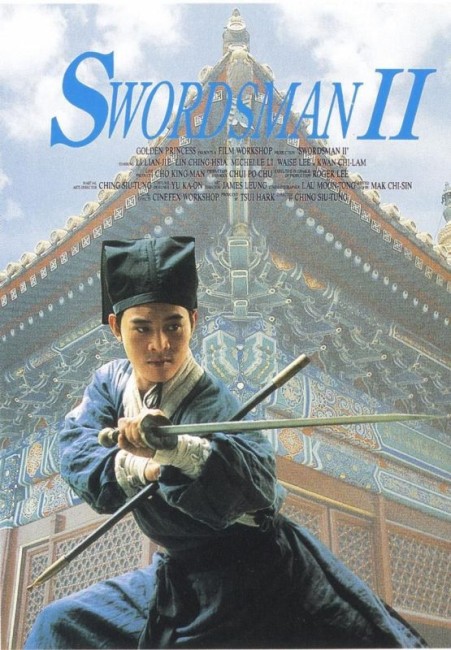 It is the 22nd year of the Ming Dynasty. Ling, a swordsman from the Wah Mountain school, travels the Chinese countryside with his bumbling female sidekick Kiddo who secretly loves him. Caught in the war between the invading Japanese and the Sun Moon Sect, they discover that Master Asia, the evil Sun Moon leader, has located the Sacred Scroll, which has transformed him into a woman while allowing him a near invincible array of magical powers.

This is a sequel to Swordsman (1990). It reteams producer Tsui Hark and director Ching Siu-Tung, who directed the action scenes for the previous film. The duo had been behind the A Chinese Ghost Story trilogy of films and would go onto handle this film’s successor Swordsman III: The East is Red (1993).

The plot with its multiple running characters and individual subplots remains fairly incomprehensible – even more so in subtitling. Like A Chinese Ghost Story (1987), Ching Siu-Tung dazzles in the amazing blend of classical martial swordplay combined with Oriental mysticism (Wu Xia cinema). It is the swordplay one has come for and as such Swordsman II moves like a rocket train and Ching Siu-Tung’s visions are genuinely unworldly.

Most of the sword battles are conducted in mid-air with people crossing strokes as they fly by one another – at one point, a battle becomes an amazing melee with all the contestants hopping up and down like a mad trampoline party. People travel by bouncing off cliffsides, walls, even running along on the tips of long-grass. Armies of attacking swordsmen fly on thrown nunchukas; magicians whip up magical storms and whirlwinds that longitudinally bifurcate horses.

One magician tears out an entire bowl of soil and ends up hanging onto it in mid-air before it is blasted apart and he has to duck the flying rocks like the asteroid storm out of The Empire Strikes Back (1980); the villain(ess) has a stock of sewing needles that prove handy weapons that she throws through the air to penetrate people’s veins or where trailing threads can act as entangling traps or to slice off ankles. Another character wields a bullwhip, even managing to uproot entire tress and whirl them around her head.

It is good to see the women getting into the action just as much as the men, although the comic scenes of Michelle Reis’s assistant and her attempts to attract Ling are played broadly and become strained. The film achieves something unique, its blend of fantastic action a far cry from anything that even enters the head of most Western directors. There is even a scene where the warrior hero sings soulful a dirge about drinking his wine and not being concerned for tomorrow.