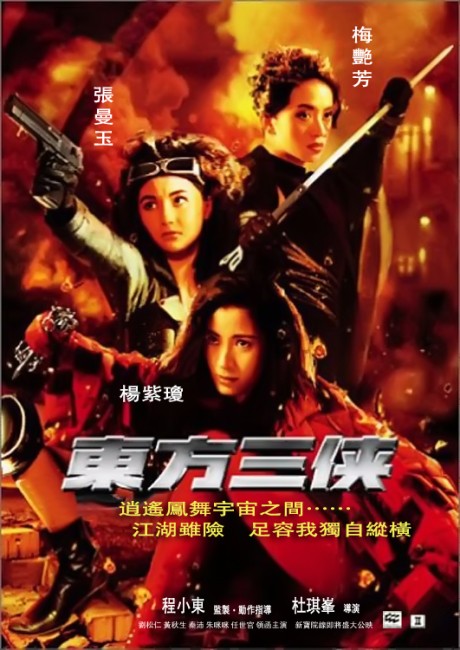 Eighteen babies have been abducted in the past few months, including the police commissioner’s own son. The masked heroine known only as Wonder Woman – who is in reality the wife of a police officer assigned to the case – foils the abductor. The abductor is revealed to be another woman Ching, who is using an invisibility cloak borrowed from her research scientist boyfriend. Ching is working for The Master, a powerful sorcerer who lives beneath the sewers and wants to raise a child to become the next emperor. Joined by Chat, an outrageous and carefree bounty hunter hired to get the commissioner’s son back, the three women team up to take on The Master.

The so-called Asian babe market – the Oriental equivalent of the American Scream Queen fad (although with actresses who can actually act) – became a burgeoning part of the cult of Hong Kong cinema in the 1990s. The Heroic Trio is a film squarely designed to plug into its appeal. The film features three of the top Hong Kong actresses – Anita Mui, Maggie Cheung and Michelle Yeoh – and all at their most alluring.

The film’s action sequences are directed by Ching Siu Tung, the director of A Chinese Ghost Story (1987) and sequels and the Swordsman sequels, among others. Ching gives what without him would be a banal film life during the incredible action sequences. We are first introduced to Anita Mui running into action across the power lines to intercept the invisible baby thief and then pinning the falling babies to the wall with thrown darts. Our introduction to Maggie Cheung comes with her leaping into a police siege on her motorcycle and entering the besieged building by sitting on a barrel, lighting it with a stick of dynamite and riding it up like a rocket. The villain has a neat device, a cage on a chain that is thrown, encircles a victim’s head and decapitates them.

There are some out-of-the-world action sequences – like a shootout from a motorcycle while it is spinning through the air. There is the climactic fight with the villain involving levitation, explosions, mid-air swordplay, dives off multi-story buildings and a cool sequence – no doubt inspired by The Terminator (1984) – where the villain’s skin is burnt down to his skeleton but he continues on driven by his will, possessing Michelle Yeoh and forcing her to fight the others.

All three women are shot in stylized posses. All give fine performances, the best of the three being Maggie Cheung who plays her character with wild carefree abandon and a slight touch of petulance that proves frequently hilarious.

The film is weakened considerably by an almost complete lack of plot. In one of the incredible holes, the Ching character races around the city abducting babies in an invisible cape, yet at the same time is waiting for her scientist lover to perfect the flaws in the cape that is not yet ready to be used.

The sequel, reuniting the two directors and the three actresses and released the same year, was the highly disappointing The Heroic Trio II: Executioners (1993).