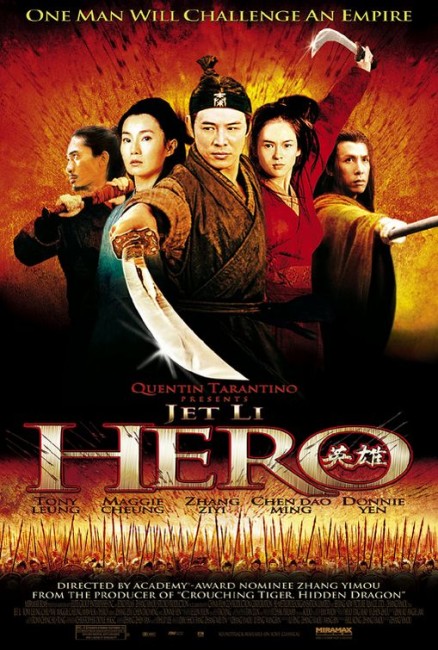 A lowly prefect from the Lan Meng province is brought to the all-powerful king of Qin. The prefect, who is without name, has succeeded in eliminating Broken Sword, Flying Snow and Sky, the three top assassins who had vowed the kill the king. The king has Nameless brought within 100 paces of him, a privilege that no other person has been granted for many years, and sits down to listen. Nameless tells his story of how he defeated the three assassins in dazzling sword combat and by setting Sword and Snow’s passions against each other. During the telling, the king suspects that Nameless is not telling the truth and comes to believe that he and the other assassins have conducted an elaborate ruse in order to get close and assassinate him.

Crouching Tiger, Hidden Dragon (2000) became the most successful ever Chinese-made film released in the West. With Hero, the Chinese have clearly been inspired to do the second most Western of filmmaking things – copy that success. (The single most Hollywood of things to do would of course have been to make a sequel). Hero sets out to be another Crouching Tiger – using a similar historical setting in China’s dynastic past and featuring the same flying swordsmen and visual poetics, even down to re-employing Crouching Tiger‘s composer Tan Dun on score and casting Crouching Tiger‘s Zhang Ziyi in another role as a young apprentice.

Hero is directed by Zhang Yimou, who was probably the most internationally well-known director from the Chinese mainland at the time. Zhang Yimou was best known for celebrated arthouse releases such as Red Sorghum (1987) and Raise the Red Lantern (1992). These are films that are filled with exquisitely beautiful visuals and a love of traditional Chinese historical pageantry. Back home though, Zhang Yimou found some criticism from Party officials for his overt visual sensuality. He has made a number of other films in the decade since Red Sorghum and Raise the Red Lantern, although these are seen as being compromised and have certainly not attained the international acclaim of his earlier films. Hero is a triumphant return to form for Zhang Yimou. It was the biggest budgeted film ever made in China and was given a major release in the US by Miramax with Quentin Tarantino even lending his name to ‘present’ the film.

Hero is a clear attempt to jump aboard the international popularity of Wu Xia cinema that was sparked off by Crouching Tiger. Even though Hero has been mounted as a copy of Crouching Tiger, it is a far superior film. Where Crouching Tiger had beautifully poetic swordplay, it felt remote and distant from its love story. Hero on the other hand has a perfect synthesis of the two. Zhang Yimou casts an epically large canvas and fills it with emotions that are bold, vibrant and as important as the visual acrobatics. One is swept up in the film’s constrained passions and most of all the story about honour, heroism and sacrifice. Contrary to expectation, the film’s climax is not a sword battle but a breathtaking realisation about the Zen-like relationship between sword and wielder. Into all of this, Zhang Yimou winds a story that is not unlike a Chinese box of unfolding Rashomon (1950)-like layers where every telling is turned about to reveal it is not the truth at all and a further then shown.

It seems like no budgetary limitation has been spared in making the film. The art direction is stunning – from the king’s throne room with hundreds of candles, each subtly blowing to reflect the truth being told, to the dazzling vista of thousands of soldiers lined up before the palace and parting to allow Jet Li through. In every version of the truth, the colours of the costumes and the surroundings also change, not unlike the effect Peter Greenaway achieved in The Cook, The Thief, His Wife & Her Lover (1989).

To choreograph the visual acrobatics, Zhang Yimou has imported Ching Siu-Tung, director of some of the very best Hong Kong Wu Xia such as A Chinese Ghost Story (1987) and Swordsman II (1992), as well action director on just about every Hong Kong fantastical film ever made. The set-pieces are stunning – the battle between Jet Li and Donnie Yen in a rain filled Go parlour, dancing off walls and hanging from overhangs as a blind musician plays the yanqin all the while; the archers lined up in the hundreds outside the calligraphy house, lying on their backs to arm their bows with their feet, of thousands of arrows flying through the air and the calm and beautifully collected cool with which the master and students return to their art inside as arrows fall all around and impale them; the fight between Tony Leung and the king in the throne room amid 40 foot lengths of green silk, slowly drifting down to fall as they are cut; Jet Li tossing a cup into the air, demolishing a circle of bookshelves and then catching the cup on the tip of his outstretched sword without spilling a drop; Maggie Cheung and Zhang Ziyi battling amid whirlwinds of autumn leaves.

The most exquisite of Zhang Yimou and Ching Siu-Tung’s set-pieces us is one with Jet Li and Tony Leung battling across a lake – a scene surely borrowed or at least elaborated out from the similar images in Crouching Tiger – with the two dancing and skipping across the water, twirling in mid-air above, trailing their swords across the surface and a wonderfully showoffy shot showing their feet dancing along on the water from underneath the surface of the lake. The only other film that has conducted such a gorgeous and dreamy blend of exquisite surroundings and fantastical martial acrobatics is Tsui Hark’s Green Snake (1993). Zhang Yimou even manages to turn Jet Li’s usually impassive and wooden acting towards the film’s advantage.

Also of interest is Zhang Yimou’s subsequent film House of Flying Daggers (2004), a further venture into Wu Xia territory that was designed as a companion piece to Hero and features many of the same creative personnel, and the later Curse of the Golden Flower (2006), which features the same blend of Chinese dynastic setting, martial arts and dreamily exquisite visuals, although is not a work of fantasy. Zhang later returned to fantasy with the English-language The Great Wall (2016) and made a further Wu Xia drama with Shadow (2018).