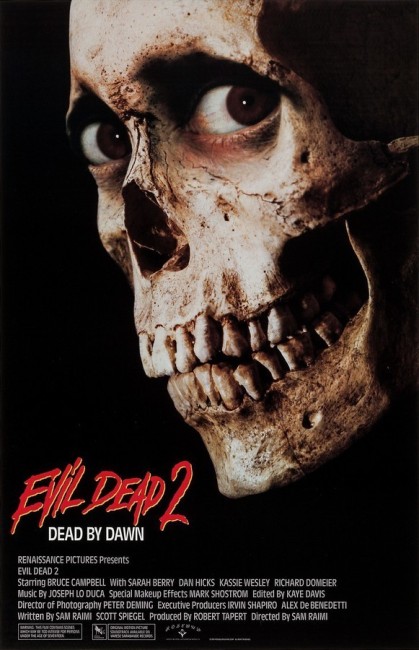 After fighting the dead and losing his girlfriend to them up at a remote mountain cabin, Ash is possessed by demonic forces. He is saved by the arrival of dawn, which causes the demons to flee. He has until nightfall to escape the valley or will remain possessed for good. He then finds that the bridge out of the valley has been torn down. Back at the cabin, the demonic powers conspire to drive him mad using an array of incarnated corpses and supernatural batterings – even succeeding in possessing his hand.

The first The Evil Dead (1981) was an enormously fun piece of no-budget popcorn splatter, made with an extraordinary energy and enthusiasm upon director Sam Raimi’s part. It became a cult hit and launched Sam Raimi’s name. Subsequent to The Evil Dead, Raimi floundered somewhat and his film noir black comedy Crimewave (1985) was a flop that was little-seen. Raimi then returned to commercial safety with The Evil Dead II. By now though, he was no longer making a $50,000 home movie – The Evil Dead II came with a $7 million budget and the backing of Italian movie mogul Dino De Laurentiis, the producer of the infamous remake of King Kong (1976).

Where The Evil Dead was a ferocious gross-out movie, The Evil Dead II emerges with a lunatically demented comic genius – it is somewhere on the order of George Romero collaborating with cartoonist Tex Avery. The nearest cinematic equivalent one might find is the scene with dismemberment of the knight in Monty Python and the Holy Grail (1975). The film is so outrageously over-the-top that it attains a level of dizzying surrealism. Blood doesn’t just spurt, it gushes like a broken fire-hydrant; when a zombie’s eyeballs are knocked out, they go flying across the room into someone’s open mouth.

There is nothing more preposterous one is likely to see in a film than the image of Bruce Campbell’s possessed hand bashing him over the head with plates or dragging his unconscious body across the floor and, when finally dismembered, scuttling around the floor giving him the finger. Sam Raimi has the sense of tongue-in-cheek that can compound the joke to the point where when the hand is finally nailed to the floor and buried under a pile of books, the topmost turns out to be Ernest Hemingway’s A Farewell to Arms (1929). The image of Bruce Campbell strapping on chainsaw and shotgun then turning to the camera to pose Rambo-style, commenting “Groovy” is so riotously silly it can bring tears to the eyes.

In the original film, Sam Raimi conducted some nifty demon point-of-view camera shots. Here the film is full of wild, dizzying, rollercoaster-paced demonic point-of-view shots but Raimi overdoes the gimmick to the point that it becomes giddy on the eyes. If the demons are so powerful, one wonders why everybody in sight is not possessed immediately or how a cabin that can be so easily invaded can provide any refuge. Raimi adds a confusing prologue, which gives a potted recount of the events of the first film but also tells them differently – although the sequence does segue on from the last shot of The Evil Dead without missing a beat. (This was added when Sam Raimi found that he could not obtain back his own copyright in order to screen footage from the original film). The opening also brings the series closer to H.P. Lovecraft (whose brand of horror underlies both films) in naming the book of incantations that raises the dead The Necronomicon, the central occult tome in Lovecraft’s work.

A further sequel was Army of Darkness (1992), followed by the tv series Ash vs Evil Dead (2015-8). Evil Dead (2013) was a remake of the original. Also of interest is My Name is Bruce (2007) in which Bruce Campbell plays himself who is mistaken for Ash and required to fight a monster.

The Evil Dead II also gave the first substantial screen role to Sam Raimi’s younger brother Theodore who, later calling himself Ted, has become a moderately well known actor, usually playing bespectacled nerds. Here, buried under makeup, he plays the professor’s undead wife. Ted has had regular bit parts in all of Sam’s films, as well as played the leads in Renaissance’s Lunatics: A Love Story (1991), the serial killer film Skinner (1994) and was a regular on tv’s seaQuest DSV (1993-5). Ted attained his greatest fame as the comic-foil Joxer on the Renaissance produced tv series Xena: Warrior Princess (1995-2001).