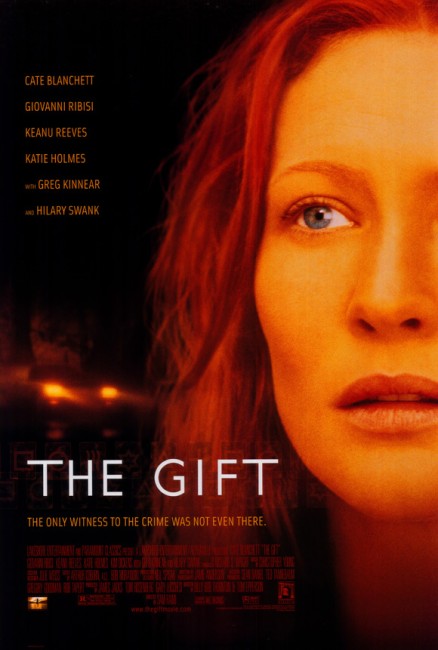 In the small town of Brixton, Georgia, widowed mother of three Annie Wilson supplements her meagre social security cheque by giving psychic readings. When Annie counsels the wife of local redneck Donnie Barksdale to leave him because he beats her, Donnie calls Annie a witch and threatens her and her children. Jessica King, the promiscuous fiancee of the local headmaster Wayne Collins, goes missing. Jessica’s father presses Annie to do a reading and Annie receives a vision and is able to lead police to Jessica’s body in a pond on Donnie’s property. Donnie is arrested, tried and convicted, but Annie’s visions then make her doubt that Donnie is the real killer.

Once upon a time, Sam Raimi made an astounding directorial debut with The Evil Dead (1981), one of the genre’s cultiest horror films, which started the 80s-90s genre of campy, unserious popcorn gore effects driven films. Raimi topped this with the hilarious The Evil Dead II (1987), which is maybe one of the best horror comedies ever made, and then went onto the dark, avenging superhero film Darkman (1990). After the relative failure of the third Evil Dead instalment, Army of Darkness (1992), wherein his penchant for slapstick horror was pushed over the edge, Sam Raimi fell silent as a genre filmmaker for the next few years. He was still making films – the Sharon Stone Western The Quick and the Dead (1995), the excellent thriller A Simple Plan (1998) and the Kevin Costner baseball film For the Love of the Game (1999).

With each of these films, Raimi seemed to be making more and more of an attempt to become a mainstream filmmaker. By the time of For the Love of the Game, Raimi was making American heartland stories in banal, simplistic terms and all of A Simple Plan, For the Love of the Game and The Gift concern themselves with the virtues of decent, ordinary people whose very ordinariness is painted in winsome, earnest tones. Subsequent to The Gift, Sam Raimi regained genre ground with the enormous successes of Spider-Man (2002), Spider-Man 2 (2004) and Spider-Man 3 (2007), before going onto Drag Me to Hell (2009) and Oz: The Great and Powerful (2013).

The script for The Gift comes from Billy Bob Thornton and ventures back into the Southern Gothic territory that Thornton charted with Sling Blade (1996) and to some extent in A Family Thing (1996) – a Gothic of small Southern towns filled with rednecks, Bible Bashers, wife-beaters and sexual abuse. One suspects that The Gift is an old Billy Bob Thornton script as, other than the virtue of its setting, it is an ordinary rehash of the standard clairvoyant murder mystery that has been done to death on film and especially tv movies with little in the way of novel or original treatments. The Gift is not an exception to any of these. Sam Raimi at least keeps the suspense moving competently throughout the middle of the film but the revelation of the killer’s identity at the end is decidedly underwhelming.

Sam Raimi makes a novelty out of its smalltown Georgia setting. While interestingly conveyed, it also seems an unreally affected vision of Georgia, one where the entire town is in danger of being overrun by moss trees and bayous, while a Southern score intrusively and repetitively twangs away on the soundtrack.

Sam Raimi’s saving grace is an impressive cast line-up. Australian actress Cate Blanchett in particular more than ably carries the film – she gives complete conviction in the part of the poor solo mother trying to cope with raising three children alone. There are fine supporting performances from J.K. Simmons, Michael Jeter and Giovanni Ribisi. There is also a surprisingly good performance from Keanu Reeves who, with The Watcher (2000) around the same time, seemed to be effectively moving away from sex symbol casting and discovering himself as an actor in villainous roles.

There could have been a good film here. However, the problem is oddly Sam Raimi himself. While The Gift is a competently made thriller, its scares are irritatingly bland, consisting mostly of loud bangs on the soundtrack. There is a scene early on where Katie Holmes asks Cate Blanchett what her marriage to Greg Kinnear holds and a pencil rolls off a table in momentous slow-motion and its giant shadow is seen crossing Cate’s face – it is a ludicrously overblown piece of foreshadowing that verges on the laughable.

It’s just when you compare The Gift to Evil Dead‘s I & II, it seems all the more disappointing. The Evil Dead films were masterworks of popcorn enthusiasm made by a young talent bursting with sheer exuberance; The Gift feels like it is made by a staid, middle-of-the-road director who is conducting an experiment in genre with no understanding of the genre’s cliches and pitfalls whatsoever.

(Nominee for Best Actress (Cate Blanchett) at this site’s Best of 2000 Awards).