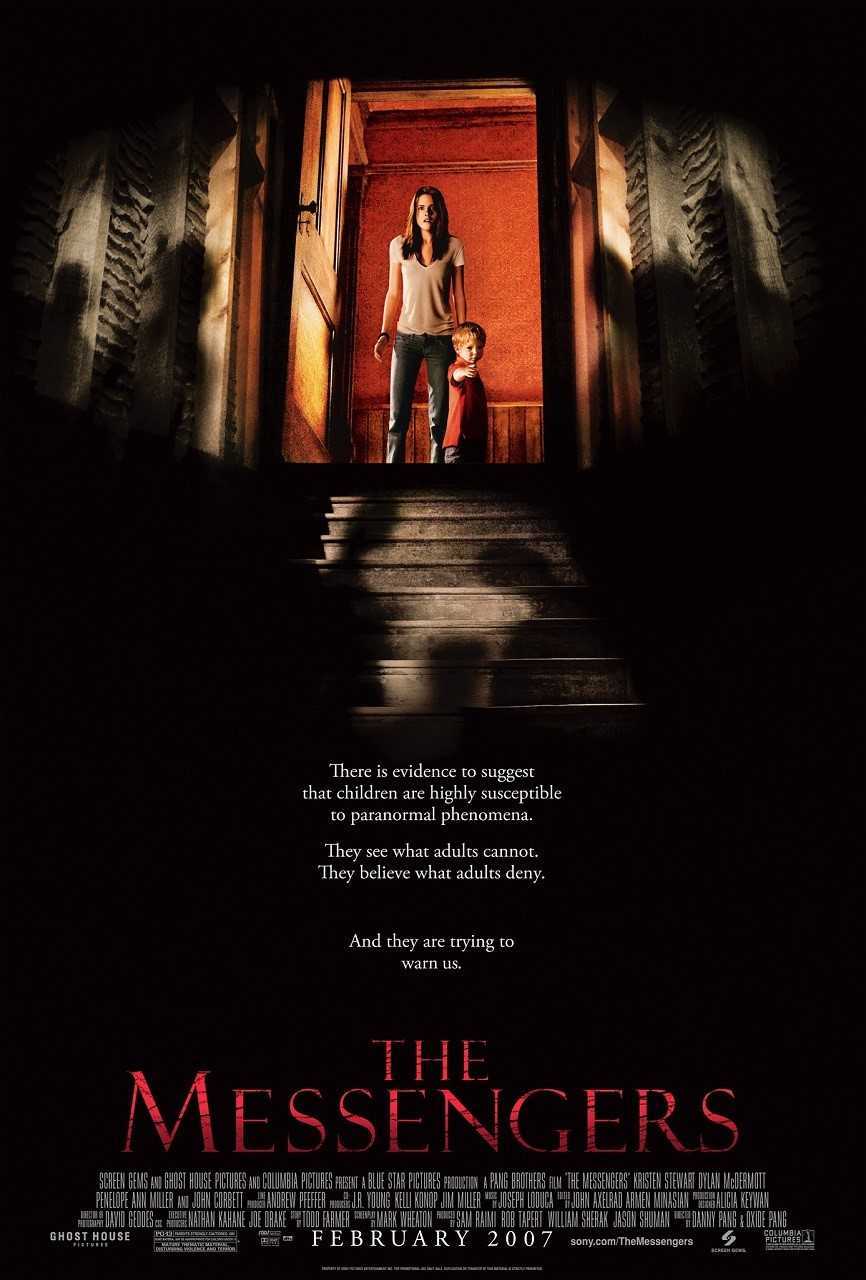 Husband and wife Roy and Denise Sullivan move from Chicago to the small town of Belton in North Dakota, along with their teenage daughter Jessica and three year-old son Ben, where Roy has brought a farm in the hopes that this will solve their economic woes. Once in the house, Jess begins to see a series of apparitions and comes to believe that Ben can too. As the apparitions increase and become more sinister, Jess’s parents refuse to believe what is happening.

In recent years, Hollywood has been turning to Asian horror cinema for inspiration. There have been the successes of English language remakes of Asian horror films like The Ring (2002), The Grudge (2004), Dark Water (2005), Pulse (2006), One Missed Call (2008), The Eye (2008), Shutter (2008) and The Uninvited (2009). Some Asian directors like Hideo Nakata, Takashi Shimizu and Masayuki Ochiai have been imported to direct these to varying degrees of success. With The Messengers, Thailand’s twin brothers Oxide and Danny Pang have been brought to the US by Sam Raimi’s Ghost House Pictures who were also behind the English-language remake of The Grudge and its sequel The Grudge 2 (2006). The Pang Brothers have made amazing works like Bangkok Dangerous (1999) and the original The Eye (2002). (See below for the Pang Brothers’ other genre works).

One was greatly excited to see what the Pang Brothers would do with The Messengers as their work within the genre has been exemplary – indeed, they have such a grasp of haunted atmosphere that they sit as two of the most exciting directors working within the genre today. You hoped that they might come along and set the tepidness of the contemporary haunted house and teen horror genres (of which The Messengers sits astride both) alight with something amazing. Only, The Messengers falls completely flat. Indeed, with the exception of the vampire film Rise (2007), The Messengers was the least financially successful of all of Ghost House’s pictures to date.

What one suspects has happened is that someone had the idea of employing the Pang Brothers for their creativity but they were placed on a short leash and treated only as hired guns. Despite being two of the most best directors in the horror genre today, the move from Thailand to the US has entirely cramped the brothers’ style and resulted in a standard haunted house story that feels utterly generic in every respect. (The same problem happened when they return to the US to remake Bangkok Dangerous (2008) with Nicolas Cage).

There is the odd moment where glimmerings of their style appears – like where we suddenly see something reflected in the baby brother’s spoon and behind him there is a dead creature scuttling along on the roof; or where things start trying to drag Kristen Stewart down into the cellar. Certainly, the scene where Kristen Stewart is holding her brother and looking down the hallway while behind them something out of focus creeps up and Ben points at it unseen by her until it comes right up behind her almost touching, before coming into focus to reveal that it is a dead body, holds something genuinely eerie – but this is the only scene where the Pang Brothers get to open up and show what they can do.

To their credit, the Pang Brothers do a fine job of capturing a sense of smalltown rural American Midwest – if you did not know anything about who they are, you would swear they were American directors. The sole exception to this is the laughable sight of Dylan McDermott trying to act a sweaty, unshaven Man of the Earth farmer type, which seems nothing more than a Hollywood star affecting a pose.

What unfortunately kills The Messengers is its plot. All the elements seem written to formula – the family struggling financially, the teenager trying to convince her parents of matters supernatural but being disbelieved. The big surprise [PLOT SPOILERS] where it is revealed that John Corbett is not the friendly stranger that he seems to be at the outset but that he is the previous tenant can be seen coming from miles away. Moreover, it is revealed that what we saw in the prologue, where it appears that the previous family were attacked by supernatural forces, was a lie – that this was in fact John Corbett going murderously off his head because the family tried to leave him. We also discover that the spirits that haunt the house are not all-purpose malevolent ghosts but are Corbett’s family who have come back to seek justice against him.

[PLOT SPOILERS CONTINUE] This requires the plot to engage in a degree of misdirection that is blatantly deceptive – first making us believe the family at the start were killed by supernatural forces and that said same forces are now after Kristen Stewart and family, when neither is the case. The film never explains who the messengers of the title are, or for that matter even what the message is meant to be. Nor is it clear what the crows that are attacking people have to do with anything.

Messengers 2: The Scarecrow (2009) was a dvd-released sequel from Ghost House, although the Pang Brothers were absent this time.