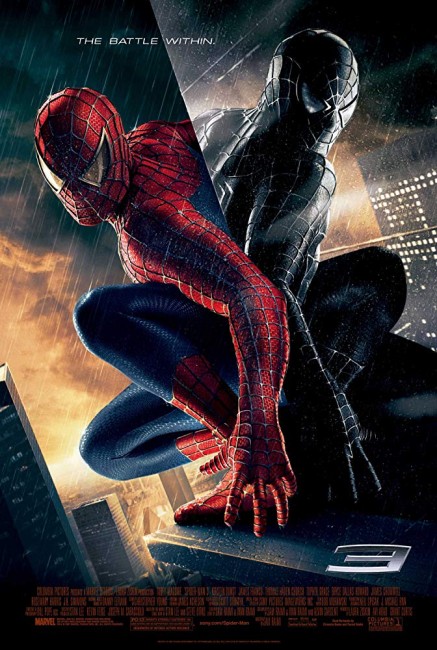 At the premiere of Mary Jane Watson’s new play, Peter Parker encounters Harry Osborn, still embittered and blaming Peter over the death of his father. Harry puts on his father’s Green Goblin costume and attacks Peter in the street but is badly injured in the ensuing fight. He comes around with amnesia, unable to remember anything that happened since his father died. Peter takes the opportunity to renew their friendship. Meanwhile, Flint Marko, a petty criminal who has tried to steal money for an operation for his daughter, has escaped from jail. Hunted by police, Marko seeks refuge at a particle physics laboratory, only to be caught in a radiation blast that turns his body into sand. He emerges as Sandman, able to transform and dissolve into sand at will. Peter’s plans to propose to Mary Jane fall apart when she sees him kissing fellow student Gwen Stacy during a Spider-Man promotional appearance. As Harry starts to regain his memory, he plots revenge by stealing Mary Jane away from Peter. Meanwhile, Peter has unwittingly picked up a parasitic lifeform that came down in a meteorite shower. The lifeform covers his body, creating an all-black Spider-Man suit. With Mary Jane gone, Peter finds that he is starting to enjoy the darker side of his personality that wearing the suit brings out in him.

Spider-Man 3 was the last of the Spider-Man films, at least involving this particular team, with Kirsten Dunst having said she was not interested in returning and Tobey Maguire also expressing doubts, while Sam Raimi has signed up for other projects. The next few years were a series of flip-flops as to who would and would not be involved in the series, before the producers decided to recast and reboot the franchise with The Amazing Spider-Man (2012) and The Amazing Spider-Man 2 (2014). With the the box-office disappointment of the latter, we then received yet another reboot of the series that goes back to Peter Parker’s high school years with Spider-Man: Homecoming (2017) and Spider-Man: Far from Home (2019), featuring Tom Holland, as well as the animated Spider-Man: Into the Spider-Verse (2018). Holland’s Spider-Man also merged with the Marvel Cinematic Universe in Captain America: Civil War (2016), Avengers: Infinity War (2018) and Avengers: Endgame (2019), while Venom received its own movie with Venom (2018) starring Tom Hardy. Thus Spider-Man 3 has the feeling of having been conceived as the concluding chapter in a trilogy. The production team seem to have put everything they have into the film with a budget reputed to have exceeded the $250 million mark, which would make Spider-Man 3 the most expensive movie ever made up to that point in non-inflation adjusted dollar amounts.

The screenplay this time comes from director Sam Raimi and his brother Ivan. This disappointingly dispenses with luminaries like director/screenwriter David Koepp and award-winning novelist Michael Chadbon who worked on the scripts of the preceding entries and leaves the creative drive of the series in the hands of the Raimi brothers whose screenwriting hands have yet to result in any standout works. Nevertheless, the Raimis are co-writing with Alvin Sargent who also wrote Spider-Man 2. One is surprised to find that Alvin Sargent is a veteran screenwriter whose career ranges way back to the 1960s with credits like Paper Moon (1973), Ordinary People (1980), Nuts (1987), White Palace (1990), Bogus (1996) and Unfaithful (2002) to his name.

With Spider-Man 3, the Spider-Man series falls prey to the problem that has crippled a number of other superheroic films series – notably the Batman series with Batman Forever (1995) and Batman & Robin (1997) and the previous Marvel Comics spin-off X-Men: The Last Stand (2006) and the subsequent X-Men Origins: Wolverine (2009) – which is that in a desire to top preceding entries the sequels up the number of villains present and subplots going on. Spider-Man 3 introduces no less than three super-villains from the comic-books – Harry Osborn as The Green Goblin Mark II/The New Goblin, The Sandman and Venom. All of these come with relative adherence to the origins that were sketched out in the comic-book, although Flint Marko is given an additional piece of backstory that shows him to be the real killer of Uncle Ben, as well as being motivated by trying to financially provide for his ill daughter. While the previous two Spider-Man films dealt with only a single super-villain apiece, this results in a plot that is exceedingly busy to the point of bursting at the seams juggling between the origin stories of the various new villains, not to mention the ongoing dramas between Peter Parker, Mary Jane and Harry Osborn, as well as the introduction of Gwen Stacy, Peter’s first girlfriend from the comic-book who is given a slightly different role here. Certainly, the Raimis and Alvin Sargent should get some award for juggling so many balls and managing to satisfyingly resolve all of them dramatically – something that could not be said for X-Men: The Last Stand or the abovementioned Batman sequels.

One of the best parts about the Spider-Man films is that they come from the same creative team, which has allowed the series to develop a strong internal story arc, rather than simply being a series where the same characters appear in different self-contained adventures. You could compare the Spider-Man films to the Batman films series, which began impressively with Tim Burton’s internally driven Batman (1989). While the Batman series (initially) dove down into fascinatingly psychological places, the character and his relationship with the people around him never seemed to grow over the course of any of the films. Here though we have seen Peter Parker struggling with and by the time of Spider-Man 3 finally growing to fit his role as Spider-Man and the development and maturation of his love for Mary Jane. Also here Harry Osborn finally comes into his full character arc and is brought to a fitting closure. The growth and development of these characters is an essential part of the through storyline for the entire series, which is not something that any other superheroic film series has ever attempted. The nearest anybody ever came to doing so was Superman (1978) and Superman II (1980), which went to the extent of finally getting Superman and Lois in bed but then reverted to form by the subsequent entries.

One’s main complaint with the character development here is that Sam Raimi tends to play everything down around the level of a mawkish teenage soap opera. This worked satisfyingly in Spider-Man 2 – still the peak of the series – but that film was driven by an exceedingly strong script. Raimi tends to overtip his comic hand sometimes – particularly in any scene that involves J. Jonah Jameson. (Although, Raimi regular Bruce Campbell proves a scene-stealer as the maitre d’ of an exclusive French restaurant).

Moreover, Sam Raimi, as could be clearly seen in the first film, has an earnestly winsome boy-scout mentality. One of the funniest parts of Spider-Man 3 – although one is not entirely sure whether it is meant as comic or not – is when Tobey Maguire is taken over by the Venom parasite and turns into a dark version of Spider-Man. Raimi’s vision of a Dark Spider-Man is amusingly represented by Tobey Maguire suddenly developing a cowlick, becoming more assertive in his business dealings, dressing sharply and eyeing girls as he walks down the street, which is clearly what Raimi regards as all that is unwholesome in his boy scout view of the world. It is a rather laughable version of a playboy player and does not suit Tobey Maguire’s gloopily gauche playing, which makes it come out more odd than it ever does convincing. Even sillier is a completely over-the-top sequence where Tobey Maguire turns into a dance floor acrobat to show up Mary Jane.

Nevertheless, Sam Raimi has gained complete command of the big-budget filmmaking process by this point and there are some lovely moments of throwaway cool in Spider-Man 3 that show off his skill – the casual image of Peter and Mary Jane lying in a web hammock slung between two trees in the park watching shooting stars; the image of the black Spider-Man sleeping attached to the side of a steeple as the sunrise comes; the below-mentioned silent mime as Sandman struggles to gain his form.

In the spectacle department, Sam Raimi makes an effort to outdo the other films and go all-out in regard to the web-slinging and dizzying swings around the streets of New York City – although this ends up with mixed results. The peak of the series in terms of superheroic action sequences will always be Spider-Man 2 and the sequences battling Dr Octopus halfway up the side of a building and especially aboard an out-of-control elevated train. The first couple of superheroic action sequences here – the ones with Tobey Maguire being abducted by James Franco aboard the glider and they fighting down a series of dizzying narrow alleys, and the sequence where Spider-Man saves Bryce Dallas Howard’s Gwen from a runaway crane halfway up a skyscraper – feel routine. The glider chase sequence feels like it has been transplanted from a videogame, while the crane sequence tends to distract too much with the dizziness of people diving through falling pieces of masonry and leaping from one piece of debris to another. Things do pick up with the impressively rendered Sandman and the fine effects showing him being punched right through, having parts of his face ground away, pounding giant fists about and emerging as a giant figure of sand at the climax.

One of the loveliest moments in the film is when we see Flint Marko first emerge from the pit and struggle to find his form, he trying to shape a hand only to see it pass through the locket he tries to pick up and then fighting to get to his feet without collapsing – where his struggle comes relayed as a silent visual mime. Of course, Sam Raimi gets his effects team together for a highly satisfying big climax where he has all three villains and Spider-Man trading fisticuffs halfway up a skyscraper with a terrified Mary Jane suspended in a taxi held up by a web in the midst.

Spider-Man 3 was subsequently spoofed in Meet the Spartans (2008).

(Nominee for Best Special Effects at this site’s Best of 2007 Awards).