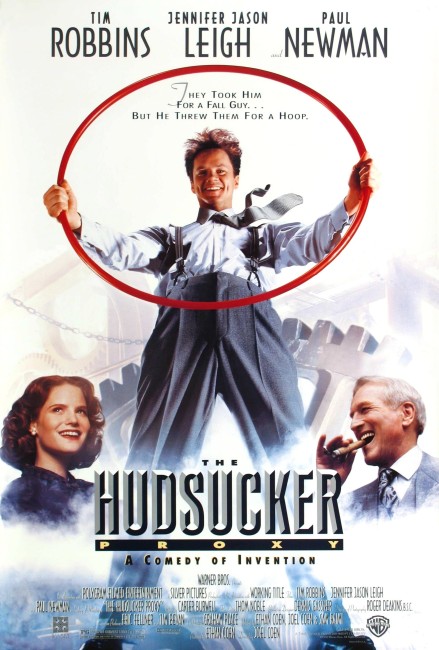 New York City, 1958. During a boardroom meeting, Waring Hudsucker, the president of Hudsucker Industries, unexpectedly gets up and jumps out of the window to his death. Vice-President Sidney J. Mussburger realizes that Hudsucker, who was the majority shareholder, has died without a will, which means that the entire company can be placed up for public sale. He persuades the board that they can gain control by making a total idiot the president and then buying up the company stock up after it devalues. When wet-behind-the-ears but enthusiastic Norville Barnes arrives from Muncie, Indiana, and gets a job at Hudsucker as mailboy, his bumblings come to the attention of Mussburger who appoints him president. Contrary to Mussburger’s expectations, Norville’s idea for ‘a circle’ that Mussburger backs in the certainty it will be an absolute disaster becomes a major hit as the hula-hoop. Meanwhile, Amy Archer, a reporter for The Argus, is assigned to write a series of articles about what an idiot Barnes is and gets a job as his secretary by posing as a girl from Muncie. As Neville becomes her confidante, Amy finds herself falling for him and drawn between her feelings and the articles she is writing in the newspaper where she is calling him an idiot.

Try and imagine a newspaper or big business thriller from the 1940s probably directed by Howard Hawks – all the characters and cliches of that genre are there from the fast-talking woman journalist to the kid with the heart of gold who rises to corporate success – set in a surreal Brazil (1985)-like world of monolithic sets. Amid this exacting homage to a bygone era, the Coen Brothers happily jumps off into fantasy of the corniest order with appearances from angels and a janitor who may be God. The Hudsucker Proxy, from its epic size, to its straight-faced and deadpan tossing up of cornball cliches, to its obsessive desire for such an outsized and opulent recreation of period detail, seems like a gigantic whimsy. Indeed, Warner Brothers had no idea of how to market or pigeonhole the $40 million folly they had bankrolled and The Hudsucker Proxy proved to be a commercial flop.

The Coen Brothers seem to specialise is an hysterical form of conte cruel. Underlying their films seem to be an inordinate pleasure in putting the screws on characters and sitting watching from a coldly detached distance – there is something about Coen films that is akin to kids pulling the wings of butterflies. Barton Fink was one long drawn scream of anguish. The Hudsucker Proxy never quite hits that same hysterical obsessiveness but in some of the scenes the Coens still have a way of observing the comic action at a neutral distance and allowing it to keep building until it becomes agonisingly funny.

The sequence with Tim Robbins’ first entry into Paul Newman’s office where his bumbling – accidentally setting papers on fire in a wastepaper basket, his attempts to put the fire out with a water-cooler that has spilt all of its contents by the time he has staggered the length of Newman’s oversized office with it, his attempts to then stamp the fire out that end up with him staggering around the office with his foot stuck in the basket, to his throwing the basket out the window only to have the draught suck the rest of the pages of the document out and Newman in his attempts to recapture the pages ending up hanging out the window with Robbins holding him by his pants that are (as a flashback shows us) about to split because he was too cheapskate to buy double-knit – is a merciless and hilarious sequence that leaves one exhausted by the end of it.

On a technical level, The Hudsucker Proxy is stunning. The sets, reminiscent of Brazil, are incredible. Paul Newman has a soundstage-sized grey office that is only inhabited by a solitary desk and a ticker-tape machine, while outside the partial shadow of the hands of a giant illuminated clock circle fill an entire blank wall of the office in stark exaggerated relief. The Coen Brothers have in the past displayed a love for sets that trail off into patterned perspective, something that this film gives them opportunity to create on a grand scale – like the sets for the mailroom, the newsroom and the accounting department (which is an entire room filled with men in identical suits sitting at identical tables).

The effects work on the film are extremely good too. Particularly good is the opening shot where the camera moves through the skyscrapers of a snowing New York night sky to close in on the Hudsucker Building and one lit office window that opens as Tim Robbins step out onto the ledge. All of this is done in one model shot, which displays astoundingly good depth perspective.

Among the performances, Tim Robbins gives an appealingly likeable chump performance and Jennifer Jason Leigh plays with motormouth energy alongside him. Best of all is Paul Newman who, as he entered his sixties, had moved from his good-natured leading man roles to this type of (usually Southern) hard-headed leadbelly. Here Newman has an immensely enjoyable time chewing up the truly colossal scenery he is surrounded by.