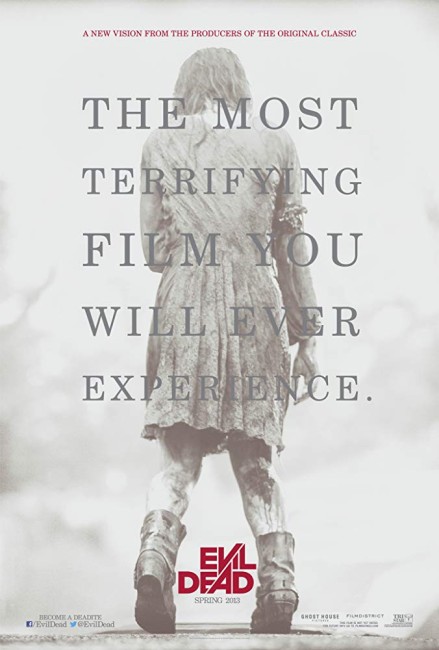 A group of five people head up to a remote cabin in the Michigan woods. Mia has convened them, including her brother David, to support her so that she can kick her drug habit. As she gets started, Eric finds an occult book in the cellar and reads from it. Mia runs away in the midst of withdrawals but returns after being assaulted by a force in the woods. Now possessed, she begins attacking the others. As they in turn become possessed, the survivors in the cabin are forced into a brutal siege situation against the dead.

The Evil Dead (1981) is one of the modern horror classics. It can be pinpointed as the one film more than any other that created the 1980s horror revolution – something that no longer took itself too seriously and came filled with a good deal of goo, gratuitous splatter and over-the-top physical makeup effects. Without The Evil Dead, there would be no Re-Animator (1985), no Troma films, no Empire Film, no early Peter Jackson – Bad Taste (1988), Meet the Feebles (1990), Braindead/Deadalive (1992). The Evil Dead, made and funded by young industry novices, launched the career of Sam Raimi who of course went onto become a major Hollywood player, helming the Spider-Man films and Oz: The Great and Powerful (2013), among others. Raimi and producer Robert Tapert also founded Renaissance Pictures, which produced hit tv shows like Hercules: The Legendary Journeys (1994-9) and Xena: Warrior Princess (1995-2001), while its leading man Bruce Campbell has become a reliable presence in horror and genre material since then.

Sam Raimi and Bruce Campbell went onto make two sequels with The Evil Dead II (1987) and Army of Darkness (1992). In these, the emphasis increasingly went from ferocious no-holds-barred gore to comedy. An Evil Dead remake has been suggested for more than a decade now. This version we ended up with here started at one point with the interesting possibility of a script by Diablo Cody, author of Juno (2007) and Jennifer’s Body (2009), although her name is not to be found anywhere on the credits of the finished film. The directorial reins of Evil Dead were handed to Fede Alvarez, a Uruguayan director who was signed on after the sensation of his five minute YouTube video Panic Attack! (2009) featuring giant CGI robots attacking Montevideo. As Evil Dead 2013 premiered, Sam Raimi confirmed that he and Bruce Campbell were going to continue the original with Army of Darkness II and to add to the confusion Fede Alvarez floated the idea of a sequel that would cross over between the two interpretations. Raimi’s plans later coalesced into the tv series revival Ash vs Evil Dead (2015-8) with Bruce Campbell reprising his role.

The remake changes the original in several ways. In the first film, the quintet of characters were simply a group of friends who went up to a backwoods cabin for the weekend and were given no more background than that. Here they get a little more depth in the addition of a plot about Mia (Jane Levy) having invited them there to help her quit a drug habit. There is also the addition of a prologue about a family tying up and setting alight a possessed daughter – although it is never clear how this factors into the events that follow. There is also no tape recording left by the professor that activates the evil dead where instead Lou Taylor Pucci reads from the book, which leads to the introduction of a series of steps for banishing the demonic forces at the end. The infamous tree rape scene has been replaced by one where it is implied that Jane Levy is violated by black ichor as she is held upright in trees, which only serves to water down the censorship-courting outrageousness that such a scene had in the original. When it gets down to the basics though and the horror element kicks in, the film holds good faith to the original plot on almost all counts.

The biggest change is the lack of an Ash in the film. Certainly, Bruce Campbell’s iconic character did not find his true deadpan strength until the second film – even so Shiloh Fernandez seems cut from the standard teen horror playbook with a thorough anonymity by comparison. Moreover, [SPOILER ALERT] he is not the one who survives the events and it is instead Jane Levy’s sister who is the one left standing at the end.

Despite the changes made, Evil Dead 2013 pays a good deal of fanservice to the original(s). A chainsaw is found among the toolshed and wielded against the possessed, while there is a scene where Jessica Lucas cuts off her own hand (although no scenes with it continuing to scuttle around and attack her after being severed) a la The Evil Dead II. Fede Alvarez even replicates Sam Raimi’s wild demon point-of-view camera shots. He has also eschewed CGI effects and made a point of determining to provide all of the effects via physical means just like the original. The professor’s tape recording is played as the end credits roll, while there is also the standard Raimi in-joke of credits for ‘Fake Shemps’. The biggest in-joke though is if one waits all the way through the credits to the very end where we are rewarded with a closeup of Bruce Campbell’s face whereupon he turns to the camera and delivers his trademark line “groovy”.

Where Evil Dead works – and many of the other aforementioned remakes of 70s/80s films fail to – is that it delivers the goods. Fede Alvarez gives the impression of having gained an implicit grasp of what made the original work and has gone in determined to deliver the modern equivalent of the ferocity it held. Both films are fairly minimally plotted and, the backstory additions notwithstanding, Evil Dead keeps to that and strips the film down to a kinetically intensive full tilt ride. When this film gets people possessed (which consists of about three-quarters of the film), there is an enormous fierceness to it. Alvarez goes for broke with the makeup effects and the actors give it their physical all.

The remake is not so over-the-top as the original – the blood is more grim and realistic as opposed to multi-coloured goo. Moreover, Fede Alvarez never goes for comedy anywhere in the film – although that was not really an element that came in until the sequel, even though the first film was far more unserious than the remake. (That said, some of the lines and their deadpan delivery get laughs from the audience, even though they don’t seem intended that way). I felt that The Evil Dead 1982‘s cheap cheesiness would be something that would be impossible to replicate but in the end I felt enormously satisfied with Fede Alvarez’s reinterpretation of the film. Quite whether Evil Dead 2013 will end up being a cult film is another matter but it is one of the few horror remakes that delivers the goods.