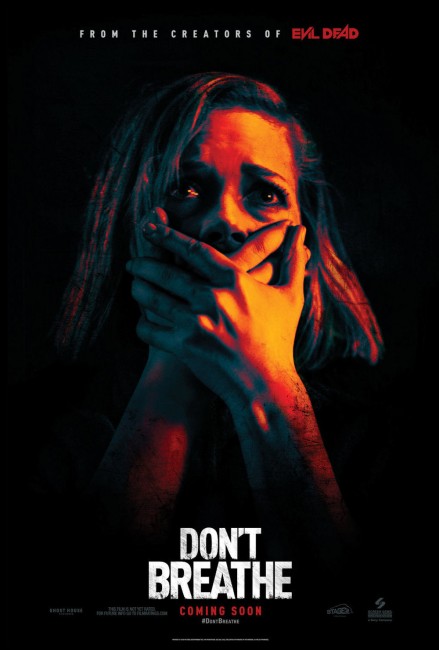 Three young people – Rocky and her boyfriend Money and their friend Alex – have a scheme where they break in and burgle houses using alarm codes stolen from Alex’s father who works for a security company. Rocky and Money then announce that they are intending to leave town. They learn of an Iraq War veteran who received a large cash settlement from the death of his daughter in a car accident and is believed to hoard the money inside his home. They break into the house, only to wake the man. Despite being blind, he proves alert and resourceful, wielding a gun against them as they try to make an escape.

Don’t Breathe is the second film from Fede Alvarez, the Uruguayan director who made his debut with the remake of Evil Dead (2013). As with Evil Dead, Don’t Breathe is produced by Sam Raimi and his Ghost House Pictures production company.

The trailer and conceptual pitch for Don’t Breathe catches your attention – the idea of teens trapped in a house where they are stalked by a blind man. From Wait Until Dark (1967) through the likes of See No Evil (1971), Blind Fear (1989), Jennifer Eight (1992), Blink (1994), Blind Obsession (2001), Julia’s Eyes (2010) and Penthouse North (2013), we have had plenty of thrillers about a vulnerable blind person being stalked/trying to survive attack by the sighted, even a deaf person being stalked in the very excellent Hush (2016). Don’t Breathe has the intriguing idea of turning this on its head and having the blind man hunting the sighted. Thus we get a good many scenes predicated around the sighted sneaking around a house, trying to avoid making a sound and being detected, and an extended sequence with the lights being turned off in the cellar and both parties at an equal disadvantage.

Don’t Breathe was greeted by terms like ‘an instant classic’ and celebrated for ratcheting up the tension and suspense. Not to mention that it has become a considerable box-office success, far more than initially expected. Certainly, in watching it, it does manage to keep an audience on the edge of the seat and rattle them with a number of jumps. In theory, this is all that you should ask from a horror film.

On the other hand, I compare Don’t Breathe to films such as the aforementioned Hush and Julia’s Eyes, both of which I have seen in recent months beforehand. These are fine and excellent horror shows that settle into the imagination with unsettling effect. Don’t Breathe has the same focus but only a day after watching it I am struggling to think of any memorable jumps or anything that was applaudable in its tension or skill. It feels like a work that is no more than a slickly polished series of jump shocks and loud noises.

What Don’t Breathe reminds of a good deal is Wes Craven’s The People Under the Stairs (1991). Both films have protagonists that are at the bottom of the rung in modern US society who decide to solve problems by breaking into other people’s houses to steal from them. In both cases, they become imprisoned there and hunted through the house by their owners. In both cases, they also find that the owners of the house keep other people prisoner. Don’t Breathe worked okay up until the introduction of the imprisoned Franciska Torocsik and then having Jane Levy imprisoned so that Stephen Lang can impregnate her. This just seemed a point where the film leapt off from being a tight psycho-thriller into ridiculous B movie psycho territory.