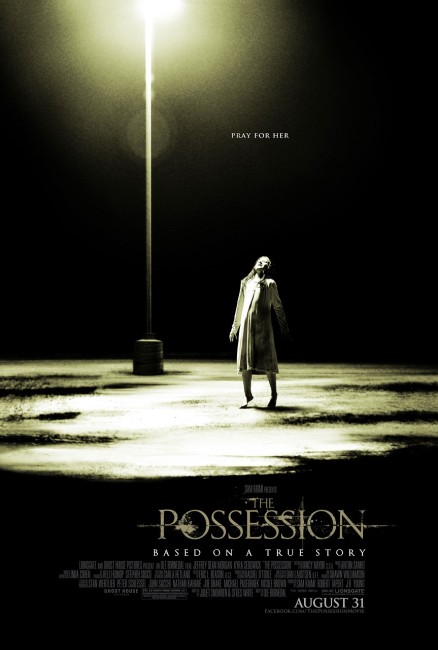 Basketball coach Clyde Brenek completes his divorce from his wife Stephanie. They share custody of two daughters, the teenage Hannah and the ten-year-old Em. Clyde takes the girls to the new house he has brought. They stop at a yard sale where Em finds an old wooden box with symbols carved on it. Afterwards, Em becomes very attached to the box and Clyde notices disturbing things – swarms of insects inside the house that appear to come from the box, how Em’s behaviour becomes obsessive and even violent after people try to separate her from it. Gradually, Clyde realises that after opening the box Em has become possessed by a dybbuk, a disembodied soul according to orthodox Jewish lore. Clyde’s only choice is to go in search of a rabbi capable of delivering Em from the entity that is possessing her.

Ghost House Pictures is a company that was formed by director Sam Raimi and his long-time producing partner Robert G. Tapert to release commercial horror films. Ghost House have enjoyed reasonable success with efforts such as The Grudge (2004), Boogeyman (2005), The Messengers (2007), Rise (2007), 30 Days of Night (2007), Raimi’s Drag Me to Hell (2009), Don’t Breathe (2016) and the remakes of Evil Dead (2013) and Poltergeist (2015), as well as the tv series’ Legend of the Seeker (2008-10) and 13: Fear is Real (2009). Ghost House was doing particularly well around 2007 – however, like the one other company producing theatrical horror in the 00s, Dark Castle Entertainment, the bottom seemed to go out of the theatrical horror market for them in 2009. The Possession, which has been sitting around since then, only received a theatrical release in 2012 and was their first film in three years.

Ghost House have demonstrated smarts in importing foreign directors who have enjoyed international acclaim for their horror work – Takashi Shimizu for The Grudge, the Pang Brothers for The Messengers – even if the results have always been weaker than the work that the respective directors have conducted in their own countries. In the case of The Possession, Ghost House bring in the services of Danish director Ole Bornedal.

Ole Bornedal had an international festival hit with the fine black comedy psycho-thriller Nightwatch (1994) and was imported to the US by Steven Sodebergh to remake it as the also effective Nightwatch (1998). Since then Bornedal has maintained an uneven profile with films such as I Am Dina (2002), The Substitute (2007) about an alien schoolteacher and Just Another Love Story (2007), none of which gained much notice internationally. Most recently, Bornedal made a strong return to form with Deliver Us From Evil (2009), an uncredited remake of Straw Dogs (1971) that was in fact far better than the recent official remake Straw Dogs (2011). Subsequent to The Possession, he returned to Denmark for the black comedy Small Time Killers (2017).

The Possession gives all appearance of a film that Ghost House (or distributor Lionsgate) regarded as unreleasable. It was announced around 2009 under the name The Dybbuk Box and floated around in limbo for several years. During this time, it was recut from Ole Bornedal’s original R-rated print to pitch it as a PG-13 film (a trend that automatically gets one star detracted from it on this site from the outset). The intriguing name of The Dybbuk Box was then dumped for the thoroughly plain The Possession, resulting in a film that shares a title with 23 other films also called Possession/The Possession – most notably, the whacko Andrezej Zulawski film Possession (1981) – and a further 26 called Possessed/The Possessed. It feels like a film that is already shouting out how utterly bland, generic and safe it is trying to be before you even sit down to watch it.

The Possession makes the proud claim on its poster that it is ‘based on a true story’. This is true up to a very slender point, although the claim that is made soon after the opening credits that the film is based on a series of events that happened to a family over a 28-day period is completely false. The genesis of and story behind the film is oddly one that is more interesting than the finished product itself ends up being. The film is based on the article A Jinx in a Box? (2004) that was published in the Los Angeles Times by Rachel Gorenstein. Gorenstein recounts the fascination that emerged after antique store owner and writer Kevin Mannis placed what he claimed was a dybbuk box in an auction on EBay in 2001, accompanied by a story telling of the malevolent effect it had had on him, his family and previous owners. After the box was purchased by Missouri museum curator Jason Haxton, the story grew to the stuff of urban legend such that Haxton even put up a web site The Dibbuk Box to deal with fascinated curiosity seekers.

Few fantastic filmmakers have drawn upon the mythology of traditional Judaism – there was Paul Wegener’s The Golem (1914) and The Golem (1920) and various films based around that, but the only other films to do deal with the concept of the dybbuk have been the obscure The Dybbuk (1937), which was made by the Jewish community in Poland before World War II, David S. Goyer’s The Unborn (2009), the fascinating subsequent Polish-made Demon (2015) and the negligible New Zealand-made horror comedy Killer Sofa (2019), as well as the opening scene of the Coen Brothers’ A Serious Man (2009).

Even the original urban legend of the dybbuk box comes surrounded by fascinating stories of Holocaust survivors, strings of bad luck befalling victims including ill health, malevolent forces wreaking havoc in their homes, even causing frequent electronic equipment malfunction and FBI raids, or of the box’s influence extending out from pictures of it that circulate on the internet. Crucially, in the case of the film, the one thing that has yet to be reported about the box is any cases of possession or for that matter swarms of insects.

Essentially, the film has kept the idea of the box and its background in Judaic lore and thrown out everything else – there is no mention of the EBay auction or any equivalent of such in the film, for instance. Everything else is played by the basics of the exorcism/possession story. We soon get all the cliche scenes – children undergoing grotesque physical transformations and talking in deep voices; the inadequacy of medical explanations in trying to determine what has happened; the child acting disturbed in school and with threatening intent around the parents; the deaths of people incidental to the events; the climactic exorcism scenes.

After having watched Pazuzu knows how many exorcism and possession films, there is nothing new here – you have seen it all before. Moreover, despite the film drawing on orthodox Judaic mythology, there appears almost no difference between it and a standard Christian exorcism/possession film – about all the film has done is hauled over the basic clich’s but swapped Catholic priests with crucifixes and rosaries for rabbis with tallits, payots and kippahs. Almost nothing is done to explain the background and history, let alone the origin of the dybbuk box.

Whatever way you consider The Possession, it emerges as weak. Ole Bornedal gets off a couple of moments that made the audience jump – one in particular when Natasha Calis abruptly causes a Torah to fly out of Jeffrey Dean Morgan’s hands and across the room – but for the seasoned horrorgoer there is nothing of interest here. In particular, the first half of the film is slow and dull in the build-up. Eventually, Ole Bornedal’s direction comes almost without imprint or affect and the film disappears inside its PG-rated blandness.