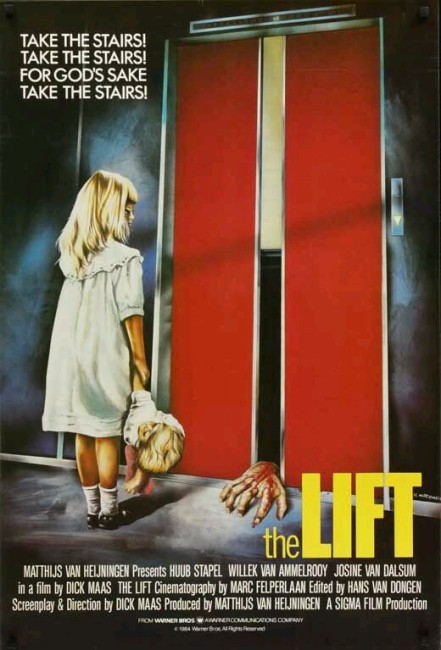 Technician Felix Adlaar is called in to repair the elevator in an office building that has been the focus of several bizarre deaths. As the deaths continue, Felix becomes obsessed with trying to understand what is happening with the lift. However, this obsession starts to get in the way of his family and job. Joining forces with journalist Mieke de Beer, he uncovers the involvement of the American multi-national Rising Sun corporation who have installed an experimental protein chip computer in the elevator.

This Dutch horror/sf film developed a modest reputation in Europe and at various film festivals when it came out. Though made on a low-budget, it gained a good deal of word of mouth and was quickly snapped up for release in a dubbed English-language version.

The Lift is an occasionally effective film. Director Dick Maas creates some eerie set-pieces and effective shocks at various intervals. In particular, the last ten minutes as Huub Stapel ascends the shaft to investigate the heart of the elevator contains some intensely wound suspense. (Although oddly, the one thing that Maas never does is use the elevator for is to create a sense of claustrophobia).

Maas also has a sense of black humour and plays visual jokes – the film opens on a scream that only turns out to be shrieks of  laughter; or where he cuts from a decapitation to a cigar cutter or from suffocated party-goers being found in the elevator to a screaming ambulance that turns out to only be a toy of Stapel’s son. In the midst of a tense scene at the climax, a hand creeps out of the edge of the frame to cover Huub Stapel’s mouth, before being revealed to only be Stapel’s own hand.

Ultimately, The Lift tries hard but fails to make the grade. While there are some effective shocks, most of the film is slow and dully paced. The major problem is that proceedings are dragged out by a slow-moving subplot about Huub Stapel’s wife (Josine van Dalsum) believing he is having an affair with reporter Willeke van Ammelrooy, which is allowed to take up a substantial part of the film. Yet it is a subplot that also seems pointless in that the issue is never resolved by the end of the film.

The version of the film seen here is also marred by some atrocious dubbing. Probably what makes the last ten minutes work well is that they dispense with the bad dubbing – the scenes are entirely without dialogue – and allow the audience to concentrate solely on suspense. The script’s talk of molecule-sized protein computer chips unwittingly touch upon the ideas of nanotechnology well before the notion was ever named.

Dick Maas went onto a number of other films. He is probably best known for the comedy Flodder (1986) and sequels. He later conducted an American remake of The Lift as Down/The Shaft (2001) starring James Marshall and Naomi Watts. His other genre films include the thriller Amsterdamned (1988) about the hunt for a serial killer prowling the canals of Amsterdam; Saint/Saint Nick (2010) about a murderous Santa Claus; Quiz (2012) where a tv quizshow host has the tables turned on him in a psychological game; and Prey (2016) about a killer lion loose in Amsterdam.