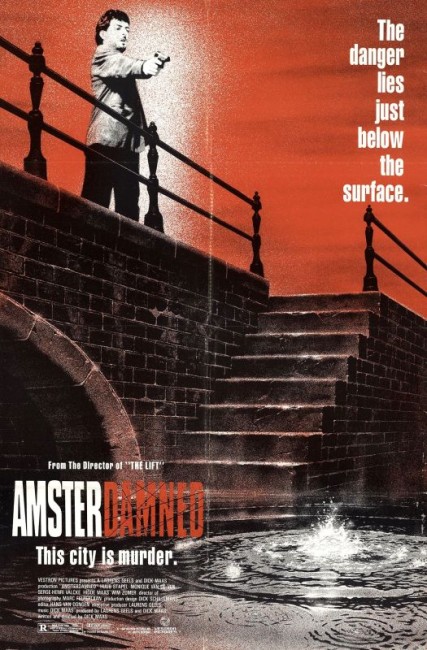 Police detective Eric Visser is assigned to the case of a serial killer who is prowling the canals of Amsterdam in a frogman suit, emerging to drag victims into the water and then leaving their bodies out on display. Eric begins investigating diving schools, during the course of which he becomes attracted to and involved with Laura, a guide at the Rijksmuseum. The fear caused by the murder brings Eric under pressure to apprehend the killer.

Dutch director Dick Maas gained some reasonable international exposure with his second film The Lift (1983) about a killer elevator, which also starred Huub Stapel. His next film Flodder (1986), a comedy about a crude and rude family that move into a posh neighbourhood (and again starring Huub Stapel), was a domestic hit and produced several sequels. At this point, Maas began to gain international attention. He was purportedly approached to direct A Nightmare on Elm Street Part IV: The Dream Master (1988) but chose to make Amsterdamned instead. He made several subsequent English language works with episodes of The Young Indiana Jones Chronicles (1992-3) and the films Do Not Disturb (1999), a thriller set in Amsterdam, and The Shaft (2001), an English-language remake of The Lift. Returning to the Dutch language, he made the comedy Killer Babes (2007), the horror film Saint (2010), the thriller Quiz (2012) and the killer lion film Prey (2016).

These days Amsterdamned would be regarded as a serial killer thriller but such a genre did not exist back in 1988. So what we have instead is the police procedural, the detective story that preceded the serial killer thriller and usually follows a detective in their investigation and solving of a crime (and would often feature police tracking what would come to be referred to as serial killers). The police procedural frequently mapped over onto the action film as witness the Dirty Harry films and many featuring Charles Bronson.

Certainly the police procedural plot we have here is an unexceptional one – it is more a structure on which to hang the action sequences and locale that Maas wants to make a film around than it is one of clever twists and turns. You suspect if the film had been made a few years later after the success of The Silence of the Lambs (1991), it might have had more of a plot involving tracking forensic minutiae and piecing together the psychology of the killer’s motivation.

Maas creates several action sequences – more on those in a minute – but never much in the way of suspense. The sole sequence where he does so is one right near the end of the film with Monique van de Ven trapped in what she thinks is the killer’s house just as he returns home. The killer, when revealed, is a suitably hideous and deformed figure. The sequences where Maas does try to create suspense are also severely undercut by a tinny 80s synthesizer score that Maas himself composed. Maas seems only capable of playing about one note at a time, which makes for a score that becomes more distracting than it ever adds mood to the scene in question.

Both here and The Lift, Maas is under the mistaken impression that creating B plots about the hero’s personal life equals characterisation. Thus we get a reasonable amount of the film given over to Huub Stapel wooing Monique van de Ven and also of his daughter Tatum Dagelet and her friend Edwin Bakker who believes he can track the killer via an ouija board (a subplot that never particularly goes anywhere). These tend to slow down and drag the plot out to nearly a two-hour running time.

Maas has also clearly construed Amsterdamned as an international thriller and so there are often scenes inserted for the purpose of showing off the city, although these often give the impression of having been written by the Amsterdam Tourist Board. The scene immediately after the credits, for instance, has a tour guide giving a spiel about Amsterdam and its canals as the camera circles the city from the sky and close in on a party in a tour boat. Chase sequences are often set up to highlight the bridges, locks and canals. Monique van de Ven seems to work at the Rijkmuseum for the sole reason she can lecture a tour group on how it houses Rembrandt’s famous painting The Night Watch (1642).

By far the most fun in the film is when Dick Maas sets up his horror and action scenes. There is a long opening – a series of point-of-views shots from the frogman killer prowling the canals at night that goes on for several minutes before he pops up to kill a prostitute. However, what makes the scene entertainingly outrageous is the one that comes after the credits that follows the daytime tour boat through the arch of a bridge only to encounter the prostitute’s body dangled upside down from the bridge that is then dragged over the glass windows of the boat and falls in through the open roof among the passengers. There is an equally outrageous scene where a bikinied girl is in the canal basking in an inflatable plastic floater only for the killer’s face to peep up through the transparent plastic from beneath and then his knife to come up through the material right between the girl’s thighs.

Even more entertaining are the action sequences. Maas sets up a great one with Huub Stapel in a car pursuing a suspect on a motorcycle through the narrow streets and across the canals to finally corner them on a drawbridge as the bridge starts going up. The sequence that became the film’s talking point though is the one where Huub Stapel pursues the killer in a high-speed boat chase through the canals where Maas sets up action sequences that would make a James Bond film of the era envious with scenes of boats racing through the network of canals and bridges, crashing right through the boat of a rowing team, going up ramps to jump over the top of bridges, skidding through patrons at the tables in canal-side cafes and Huub Stapel even being dragged behind his boat at one point. It’s one of the great action sequences of this era.