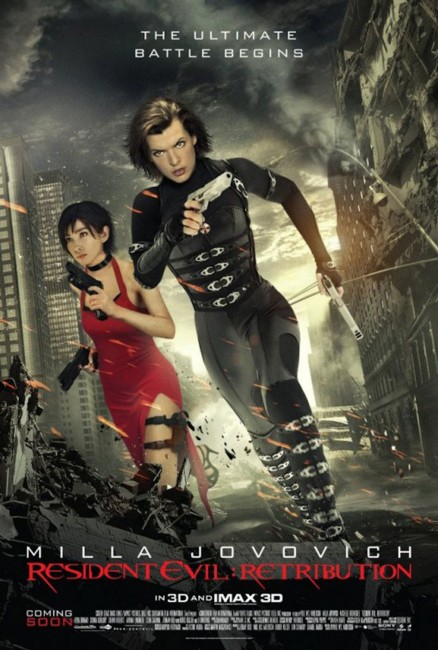 Alice wakes up, a prisoner in an Umbrella Corporation facility. The power abruptly goes off as the computer makes a reboot and she is able to affect an escape. She finds that her escape has been facilitated by Umbrella Corporation CEO Albert Wesker who has hacked into the system to free her. The Red Queen is still rogue and is determined to eliminate all of humanity. It is explained to Alice that she is inside an Umbrella Corporation testing facility in the frozen Russian wastes. An armed team has been sent in to rescue her but in order to get out she has to make it through various testing simulations of Tokyo, Moscow, New York City and suburban USA. After becoming aware of her escape, the Red Queen unleashes mutants, zombies and clones of Alice and several others. On her journey, Alice encounters Becky, the daughter she is mother to in one of the simulations, and decides on a risky detour to rescue her.

It is perhaps a testament to the power of the publicity machine or else the empty-headeness of the movie-going public that the Resident Evil series managed to stagger out six films. The overriding question you might ask is why. The first Resident Evil (2002) was a competent but routine adaptation of the videogame. The box-office results were decent but nobody seemed to have anything good to say about it.

With Resident Evil: Retribution, director Paul W.S. Anderson is back in action. The film seems intended as a tribute to what has gone on before, bringing back many of the familiar supporting cast – Michelle Rodriguez, Sienna Guillory, Oded Fehr, Colin James, Boris Kodjoe and the characters of Albert Wesker, the J-Pop Girl and the Red Queen. Anderson tosses in elements familiar to the rest of the series – zombies, a mild level of gore, mutant monsters and kick-ass chicks in action (Li Bingbing plays all of her action scenes rather absurdly wearing a red evening dress).

Milla Jovovich is back in the central role of Alice and goes through the entire film with a lack of expression. She gets a daughter of sorts – well actually a clone child that is given to her clone in one of the simulations – which is about the nearest she is ever going to get to character development. There are all the action scenes, which Paul W.S. Anderson handles in a customarily desultory way, apart from one worthwhile fired-up sequence with Milla Jovovich fighting zombies off in a corridor after she escapes the Tokyo simulation.

As before, Anderson’s script throws in all manner of perplexing twists. The film openings on a massive aerial attack on an aircraft carrier, which for reasons unclear is played in reverse. The next scene is an entirely baffling one where Milla Jovovich wakes up (just as she did in the first film) in what increasingly becomes clear is an alternate reality of some sort where she is now a regular housewife with a husband and daughter, before the neighbourhood is invaded by zombies. To Paul W.S. Anderson’s credit, this is eventually rationalised in a way that makes sense.

Elsewhere, Resident Evil: Retribution is made to resemble a videogame more than any of the other films with Milla Jovovich having to progress through a series of simulations that resemble game levels, which is emphasised by cuts away to three-dimensional maps and displays that show the party’s progress through the complex.

The one appearing to be having the most fun in an otherwise instantly forgettable show is Michelle Rodriguez who has two rather fun roles – as a hard-ass military type who eventually becomes a super-villain of sorts and gets to go head-to-head to with Milla Jovovich at the climax and an alternate role as a regular mom where she gets the film’s few funny lines asking Jovovich why she is outfitted in bondage gear and protesting that she voted against the NRA when asked to handle a gun.