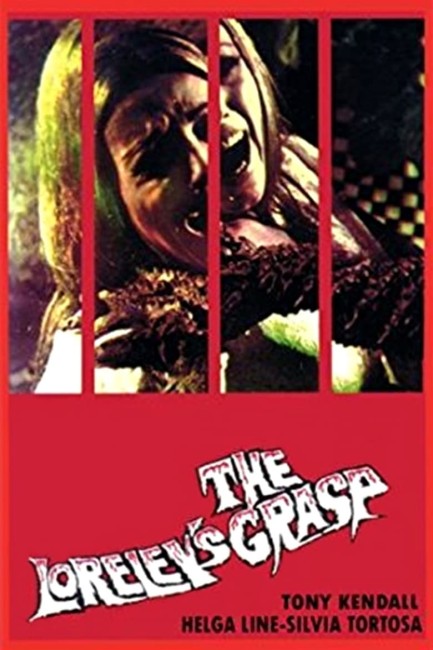 aka When the Screaming Stops
(Las Garras de Lorelei)

A small German town on the banks of the Rhine is being attacked by a reptilian creature that emerges at night and devours the hearts of its victims. The local girls’ boarding school is fearful for the safety of the girls and hire the hunter Sigurd to protect them, although the head teacher Elke Ackerman is disdainful of Sigurd’s cocky handsomeness. Sigurd meets Professor Von Lander who insists that the creature is the mythic Lorelei, which reverts to its prehistoric ancestry under the moonlight and devours human hearts in order to remain immortal.

The Loreley’s Grasp is not a very good film. The script is a mishmash of ideas. The idea of the Lorelei (misspelled Loreley on the credits) comes from Germanic folklore – a woman who sat on a rock beside the Rhine and tempted men to their deaths. The film does actually go to shoot in Germany along the Rhine. On the other hand, the siren from the original folklore has become a green-skinned monster who goes around killing people and devouring their hearts in order to remain immortal. The script conflates this with some nonsensical talk about dead tissue reanimated and reverse evolution under the moonlight, while the only means to kill the creature is the radioactive sword of Siegfried (another figure from different German folklore tales), while Wotan (or Odin) is said to be the Loreley/Lorelei’s father.

Amando De Ossorio was filming at a time when censorship had been opened up around the world, allowing the depiction of much more nudity on screen. De Ossorio seems to be making the film to titillate (although the actual amount of on-screen nudity is fairly slight). Like Hammer’s recent Lust for a Vampire (1971), the principal setting of the girl’s boarding school is there for no other reason than to have a parade of beautiful girls walking around in their bikinis and nightwear. De Ossorio even stages a catfight between three women clad in leopard skins at one point. More to the point, the Loreley/Lorelei mostly targets women victims and usually slashes them with her claws, tearing their tops off.

Nothing much particularly happens. There are assorted attacks around the town. We cut back to the girls at the school and there is an hostility between the incredibly beautiful head teacher Silvia Tortosa and cocky hunter Tony Kendall that you know will blossom to attraction. Professor Angel Menendez voices wild theories and is then killed. There is a climax where Kendall confronts the Loreley/Lorelei by diving to its underwater grotto – a striking location in what looks like a ruined church. The grotto is blown up and that is about it.