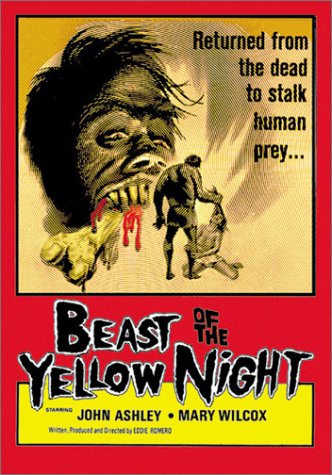 In 1946, Joseph Langdon, a US soldier stationed in the Philippines, flees into the jungle, wanted for desertion and a variety of crimes. As Langdon lies dying of starvation, Satan appears and offers to save Langdon if Langdon will serve him. Langdon agrees. In the present day, Satan incarnates Langdon in the body of Phillip Rogers, an American businessman living in Manila. Phillip’s wife Julia and brother Earl notice a sudden change in his personality, especially as Phillip pushes Julia into the arms of Earl. At the same time, Langdon/Phillip keeps turning into a wild beast that runs out into the night where he kills random people.

The Filipino exploitation genre was a unique fad of the 1970s. The Filipino mad scientist film Mad Doctor of Blood Island (1969), co-directed by this film’s director Eddie Romero, became a considerable success due to a novelty marketing campaign in the US. It spawned several sequels and other filmmakers, both US and Filipino, made a number of horror works in a similar vein. As a result, the Philippines quickly became a territory that welcomed US filmmakers who could shoot on the cheap where labour costs were low and the area was not as unionised as Hollywood. This period led to a truly mind-boggling series of exploitation films. There was a documentary about the phenomenon with Machete Maidens Unleashed! (2010).

The Beast of the Yellow Night was another of these Filipino-made horror movies. It features John Ashley who had gained a small name in the early 1960s in the Beach Party movies then went to the Philippines to star Mad Doctor of Blood Island and subsequently moved there, essentially reinventing his career in Filipino exploitation cinema. With The Beast of the Yellow Night, Ashley also became a producer.

The Beast of the Yellow Night is not one of the better Filipino horror films. For one, there is a fundamental confusion down at the script level. The film starts off as being about a man who makes a pact with The Devil and is sent back to Earth (for reasons never entirely made clear). This makes the film seems like a variant on a 1940s Hollywood light fantasy such as Here Comes Mr Jordan (1941) and in particular Angel on My Shoulder (1946), which featured exactly that premise. However, for reasons even less clear, this is also crosshatched with what is a werewolf film in all but name where John Ashley periodically turns into a beast creature that goes out and attacks people.

Other fundamental confusions exist. The film establishes that John Ashley is a deserter from the US Army in the 1940s who makes a deal with The Devil, dies and is then resurrected as an American businessman in the present. How is it then that when Ashley becomes the businessman, people who knew him as a soldier in his original body recognise him, yet at the same time his wife and brother also see the same person they know? The other confusion is to what the title means – unless ‘yellow night’ is some kind of colloquial expression for the tropics of which I am not aware, it never seems to refer to anything in the film. To make it seem valid we have a few scenes where yellow fumes are blown across the set.

These fundamental confusions at the script level end up killing the film. Unlike the Blood Island films, there is not the usual luridness – mad scientists in the jungle, topless women being pursued by the monster, icky meltdown effects – to perk things up anywhat. The dramatics and monster effects are on the slight side.

One of the pluses of the film is Vic Diaz, cast as The Devil. Usually in these Filipino exploitation films, the native actors were given fairly anonymous parts but the rotund Diaz takes the opportunity to play to the gallery with quite sinister effect.

Eddie Romero (1924-2013) was one of the key figures in the Filipino horror film. He co-produced the very first of these Terror is a Man (1959) and then went on to co-direct with Gerardo de Leon the first two Blood Island films Brides of Blood (1968) and Mad Doctor of Blood Island (1969) and solo directed the third Beast of Blood (1971). On his own, Romero made other horror efforts such as Beyond Atlantis (1973), The Twilight People (1972) and The Woman Hunt (1973). John Ashley was the lead in all of these.