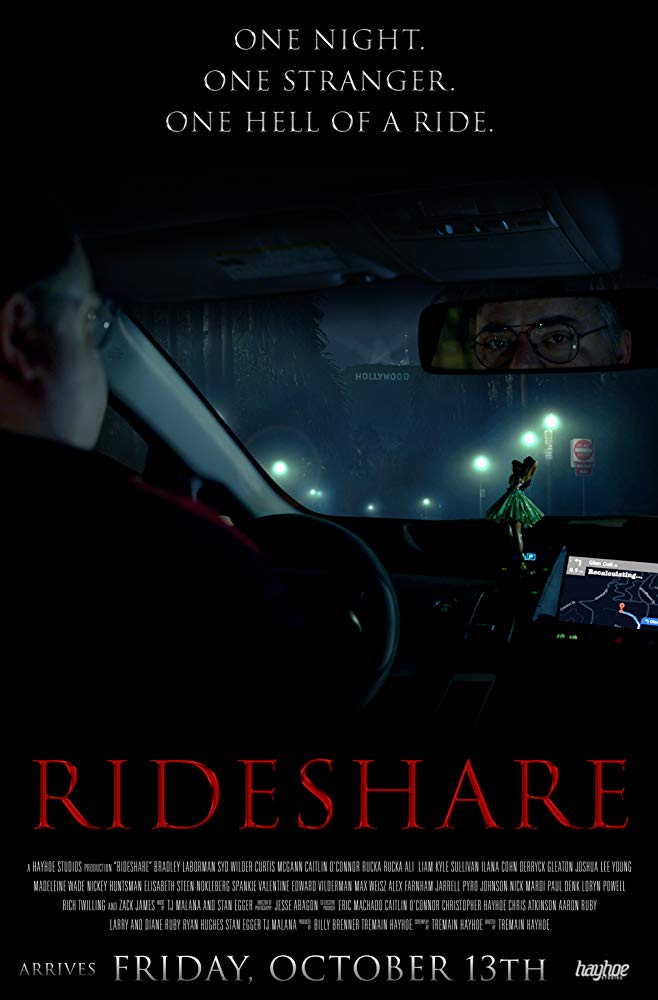 Jason is a driver in the Los Angeles area with the ridesharing company Hitch. He is scathing of his customers, holding their pretensions and self-absorption in contempt. He is also on a killing spree where over the course of one night he gives his customers drugged bottles of water and then kills them in various ways.

Rideshare was a directorial debut for Tremain Hayhoe who runs the L.A.-based Hayhoe Studios that has been producing content for YouTube. The film readily jumps aboard the recent phenomenon of rideshare apps – Uber, Lyft and other competitors – who have harnessed the ability of individuals with vehicles to sell their services driving people around, something that has come to supplant the regular taxi industry in most areas.

The film is like a very dark version of Taxi Driver (1976) – maybe a Taxi Driver recast with Joe Spinell from Maniac (1980). Most of all I was reminded of tv’s Taxicab Confessions (1995-2006) but with someone with a deeply misanthropic view of the human condition sitting offering scathingly sarcastic commentary of everybody who passes through the cab.

The whole film consists of a series of cab encounters one after the other where driver Bradley Laborman launches into his passengers’ pretensions and then usually kills them. It feels very much a film that is made by someone who actually has worked in the rideshare business and built up an antipathy to the customers they are required to drive. Indeed, Tremain Hayhoe states he was working as an Uber driver in L.A. to make ends meet at the time.

The scenarios develop something increasingly creepy, like one scene where Bradley Laborman makes a poisoned food delivery to a girl, insists on coming in to use her bathroom and then starts undressing her as she passes out – only for her boyfriend to return and Bradley be stuck in the bathroom. The most darkly funny of these is one passenger who proceeds to harangue Laborman about how the bobble doll of a hula girl he has on his dashboard is culturally insensitive and led to subjugation of the natives before he simply orders her out of the car and then backs up and runs her over.