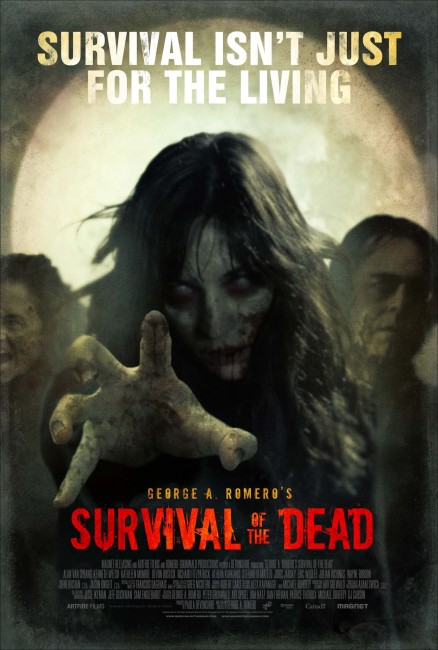 Sarge leads a group of three armed men and one woman who pretend to be soldiers and hold up civilians in the aftermath of the zombie outbreak. The island of Plum off the coast of Delaware is divided between the O’Flynn and the Muldoon families, both headed by two equally strong-willed and stubborn patriarchs. Not long after the outbreak, the O’Flynn family head Patrick created a posse and began ruthlessly shooting the resurrected dead. He was stopped by Seamus, the head of the Muldoons, who insisted that the dead be allowed to live because they were family. Seamus forced Patrick to leave the island at gunpoint. Now, after being joined by the teenage Boy who has the keys to an armoured car that holds a million dollars in cash, Sarge and his team pick up an internet broadcast from Patrick, inviting people to come to Plum Island, advertising it as a refuge free of zombies. They head to the designated ferry landing, only to run into a trap that Patrick and his men have laid to rob all comers. They shoot their way out and take the ferry. With his men devoured by zombies, Patrick jumps aboard and makes a cautious truce with the group. Once on the island, Patrick gathers members of his family and sets out with the intention of killing Seamus. Sarge and his team then find themselves caught in the erupting war between two sides, not to mention the zombies that Seamus had allowed to run free across the island.

The modern zombie film, proliferated as it is by dozens of low-budget copies that pile on either gore or a wacky tongue-in-cheek attitude, all began with George A. Romero. Romero directed the low-budget hit Night of the Living Dead (1968), which in turn gave birth to the independent horror movement of the 1970s and bade goodbye to standard horror cliches. Romero consolidated that with Dawn of the Dead (1978), which created an Italian gore industry and numerous imitators. George Romero subsequently made the vastly underrated Day of the Dead (1985) but that was not a success and was a compromised vision of the film that Romero had originally wanted to make. Thereafter, Romero fell silent on matters zombie for two decades. He made a number of other films during this period – Monkey Shines (1988), Two Evil Eyes (1990), The Dark Half (1993), Bruiser (2000) – but the two decade lull from 1985 to 2005 is largely one where the sociological fire and intellectual bite that fuelled Romero’s zombie films and other works of the 1970s and 80s is gone, marked also by an increasing difficulty in his finding independent funding.

Just when George Romero seemed washed up and consigned to a forgotten backwater, a funny thing happened. And that was that the fans of his zombie films, in particular Dawn of the Dead, had grown up and started making their own homages to the genre. All of a sudden, the Romero zombie film was in once again with a mass of homages in films like Resident Evil (2002), 28 Days Later (2002), House of the Dead (2003) and then the big success of the remake of Dawn of the Dead (2004) and the spoof Shaun of the Dead (2004). This opened a sudden gateshed of zombie films, most of the low-budget dvd-released variety.

Somewhere in all of this someone remembered George Romero. He was granted the money to return and make the sequel to Day of the Dead that he had promised for decades, which emerged to mixed response with Land of the Dead (2005). Following this, Romero moved location from the US and set base up in Toronto where he went onto produce Diary of the Dead (2007) and Survival of the Dead here, both of which approached the zombie theme anew and showed there were fascinating new ideas to be wrought from it and that Romero still had the fire and originality that had seemed dulled in his works throughout the preceding two decades.

From the opening scene of Survival of the Dead, we see that Romero is back on classic form. The scenes have Alan Van Sprang holding his commanding officer at gunpoint for endangering them, despatching a zombie as it gets up from the body bag while another zombie tears the c.o.’s cheek off before having its head blown off by a rifle shot. There are some excellent pieces of writing that show that George Romero can still fire a film up – like the scene that introduces us to the Muldoons and O’Flynns with Kenneth Welsh and his posse entering the home of the Muldoons demanding to see the children after the accident, only for the wife to pull a gun and be shot by the posse and the husband to have to face the choice of putting a bullet in her head, while the rest of the group go to shoot the zombified children where they are chained up in their beds, only for the rest of the Muldoon clan to turn up armed and demanding that they leave the dead alone. It adds something fascinatingly different to Romero’s zombie scenario that leaves us racing to grasp the nature of the social conditions on the island (even if you are wondering how people from rural Ireland somehow became transplanted to just off the Delaware coast).

Sometimes George Romero can write one-dimensional characters that are shrill cliches; other times, one of the last being Day of the Dead, he writes characters of considerably complex depth. He rediscovers the ability to do that here and is aided by one of the best casts he has had in some time. Hero Alan Van Sprang gives an excellent performance and is one of the more morally shaded characters in a Romero film. (He is also the only one to be directly tied to another Romero zombie film as a flashback to Diary of the Dead shows). There is also Kenneth Welsh having the time of his life sporting a broad Irish accent and playing the wily rogue role for all it is worth. Richard Fitzpatrick has an equal degree of boisterous fun opposite him. There is also a wry and intelligent performance from Devon Bostick as the eponymously named Boy and from Athena Karkanis as the sole female member of the group. In fact, Romero gets better performances with barely known actors here than he did when he had a big name recognisable cast in Land of the Dead.

Romero also returns to the days of Dawn– and Day of the Dead and their elevation of gore-drenched human and zombie dismemberment to an artform in itself, something that became disappointingly watered down in Land of the Dead. There are all the novelty zombie despatches – a fire extinguisher fired down a zombie’s throat exploding its head with foam; a flare gun fired into a zombie’s chest, setting its head alight (followed by the sublime cool of Alan Van Sprang nonchalantly lighting a cigarette off the body before kicking it overboard); a zombie being impaled in the foot with a pitchfork and continuing on after ripping its foot off; a person being devoured down to the spinal column.

Romero also returns to exploring the nature of the zombies that he began with Day of the Dead. As in Day, we see the zombies remembering aspects of their past lives – one being able to start and drive their car on the ferry; a zombie postman chained up on the island and going through an endless cycle of putting a letter in a mailbox and taking it out again, while others are seen pushing cartwheels and chopping wood. Romero creates a fascinating social situation on the island – evenly divided between the usual business of eliminating the dead vs preserving them because they are family. As you could see towards the end of Land of the Dead, the situation goes from all-out war to the question of how best two such inimically opposed and hostile forces can co-exist in the world. The result is a zombie film that is far more thematically richer than both Land of the Dead and Diary of the Dead placed together.

The film arrives at a bleak ending that is comparable to what George Romero pulled off in both Night of the Living Dead and The Crazies (1973). Here Kathleen Munroe finally sees her zombie twin sister eat the horse that Richard Fitzpatrick has been trying to get her to do all along. She has been bitten during the melee and rushes to tell the others the news that the zombie diet can be changed, only to be shot by Kenneth Welsh before she can say anything, he savagely reminding her of the question she asked him at the beginning of the film of whether he is strict enough to kill one of his own. There is a beautifully sardonic coda where the two old men rivals meet under a giant full moon, now zombies and firing guns at one another that click on empty chambers. It is something that turns Survival of the Dead into an ingenious variation on Ridley Scott’s The Duellists (1977).

George A. Romero’s other genre films are:– the classic zombie film Night of the Living Dead (1968); Jack’s Wife/Season of the Witch/Hungry Wives (1972) about suburban witchcraft; The Crazies (1973), an underrated film about a madness-inducing biospill; Martin (1976), a superb deconstruction of the cinematic vampire myth; Dawn of the Dead/Zombies – Dawn of the Dead (1979); Creepshow (1982), a collaboration with Stephen King and a homage to horror comics; Day of the Dead (1985); Monkey Shines (1988) about a psychic link between a paraplegic and a murderous monkey; Two Evil Eyes (1990), an Edgar Allan Poe anthology made in collaboration with Dario Argento; The Dark Half (1993), from a Stephen King novel about a writer haunted by an evil doppelganger; Bruiser (2000) about a man whose face suddenly becomes a blank mask; Land of the Dead (2005) and Diary of the Dead (2007). Romero’s scripts include Creepshow II (1987), Tales from the Darkside: The Movie (1990) and the remake of Night of the Living Dead (1990). Romero has also produced Deadtime Stories (2009), Deadtime Stories 2 (2010) and the remake of The Crazies (2010).