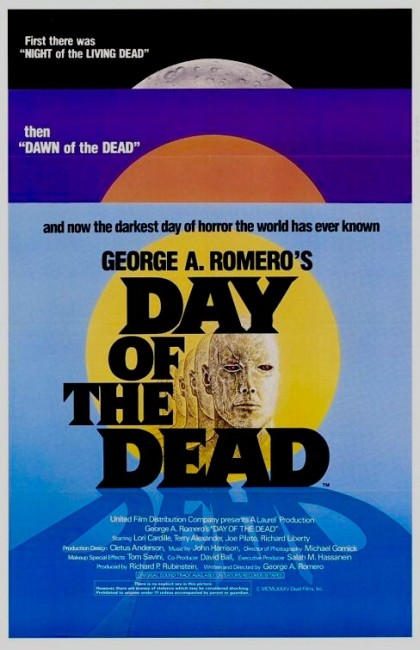 Zombies now outnumber humanity 400,000 to one. In a fourteen-mile long underground silo, scientists are making a last-ditch attempt to save humanity by attempting to find what causes the dead to become zombies. The somewhat unbalanced Dr Logan has succeeded in taming one zombie and making him remember his past life. The purpose of the mission is now being questioned by the new military commander, the psychotic Captain Rhodes. With Rhodes’ men all dangerously close to the edge from overwork, tensions between the scientists and the military mount to exploding point, leaving the silo endangered by the zombies massed outside.

Day of the Dead was the third of George Romero’s series of zombie films that began with Night of the Living Dead (1968). It was thought before Day of the Dead came out that it would be the final entry in the series but Romero revealed during the film’s release that lack of budget had forced him to cut back on the scale of his vision and that the saga would be completed in a further sequel.

With George Romero’s becoming an increasingly sporadic director in the 1990s, it looked like the tetraology would remain uncompleted. However, the long-awaited sequel finally emerged as Land of the Dead (2005) amidst the renewed interest in George Romero’s zombie films in the 00s and this led to two further spinoffs with Diary of the Dead (2007) and Survival of the Dead (2009). (For an overview of the genre see Zombie Films).

The quick recommendation for Day of the Dead should thus go – anyone interested solely in splatter should fast-forward to the end; anyone interested in a brilliant, explosive, bared-to-the-bone apocalyptic horror film should have no trouble waiting the distance. George Romero seems to have taken the criticisms of the blandness of the characters in Dawn of the Dead to heart and Day of the Dead is almost all characterisation. It comes filled with temple-straining confrontations and a view of human nature that is as frightening, if not more so, than the zombies.

Most notable among the performances is Joe Pilato who gives a performance of seething, razor-clenched anger as the square-jawed Captain Rhodes, and Richard Liberty as the demented Dr Logan, who goes the whole route, giggling, rolling his eyes and petulantly telling zombies off while maintaining an alarming rationality. The highest acting accolades should however be reserved for Howard Sherman as Bub, the tame zombie. Within the dull, slow-witted hesitance and vacuous facial mimes is a performance of considerable pathos – the scene teaching him the use of a Walkman is indeed a lovely one, while the salute he gives at the end perfectly droll touch.

Day of the Dead would not be a George Romero zombie film without its welter of splatter effects and Tom Savini goes far beyond anything he ever did on Dawn of the Dead with an amazingly graphic, far less comic-booky and more blackly terrifying array of throat rippings, arm severings, bitten fingers and the like. There are some grotesquely memorable scenes like where a zombie turns over on a laboratory table and lets its intestines run down the side; the severed head with the eyes that still keep moving; or Joe Pilato’s end being ripped in two by zombies.

Not only an absolutely compelling film dramatically, Day of the Dead also represents an extraordinary turning out from the inside of Romero’s own zombie mythology, teetering the trilogy over into a doomed scientific quest to find the origins of the dead. It is a brilliant script, none the more so than the scene where Terry Alexander delivers a haunting philosophical treatise for the statisticians of the human race. There are other sharp and charged scenes – Lori Cardille’s battering by sexual innuendo; a scene where Joe Pilato tries to force her to stop leaving the dinnertable at gunpoint; or Richard Liberty’s experiments showing zombies operating by instinct, still eating after their intestines have been removed – that linger in the memory for a long time after.

George A. Romero’s other genre films include the cult favourite Night of the Living Dead (1968); the suburban witchcraft film Jack’s Wife/Season of the Witch/Hungry Wives (1972); The Crazies (1973), an underrated film about a madness-inducing biospill; Martin (1976), a superb deconstruction of the cinematic vampire myth; Dawn of the Dead (1978); the Stephen King-scripted horror comic homage Creepshow (1982); Monkey Shines (1988) about a psychic link between a paraplegic and a murderous monkey; Two Evil Eyes (1990), an Edgar Allan Poe collaboration with Dario Argento; The Dark Half (1993) from the Stephen King novel about a writer haunted by an evil doppelganger; Bruiser (2000) about a man whose face suddenly becomes a blank mask; Land of the Dead (2005), Diary of the Dead (2007) and Survival of the Dead (2009). Romero has also produced the Tales from the Darkside (1983-5) and Monsters (1988-9) horror anthology series, as well as the films Deadtime Stories (2009), Deadtime Stories 2 (2010) and the remake of The Crazies (2010). His scripts include Creepshow II (1987), Tales from the Darkside: The Movie (1990) and the remake of Night of the Living Dead (1990).