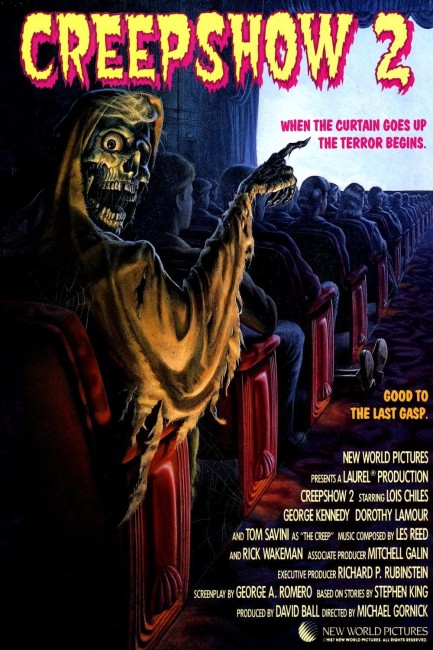 The latest issue of the ‘Creepshow’ comic-book is delivered to the eagerly waiting young Billy. Old Chief Woodenhead:- When Indian youths murder the two elderly proprietors of a general store, the wooden statue of an Indian outside the store comes to life to exact revenge. The Raft:- Four teens go up to a remote lake for a weekend of partying but become trapped on a raft in the middle of the lake by a creature that lurks in the water. The Hitch-Hiker:- A rich housewife, hurrying home after an evening’s extra-marital coitus, skids on the highway and runs down a hitch-hiker. She is late getting home and does not stop. However, the hitch-hiker will not stay dead and continues to harass her all the way home.

Creepshow II was a thoroughly disappointing sequel to the George Romero-Stephen King collaboration Creepshow (1982), which was intended as a homage to horror comics. It is typical in the case of sequels that fail to match the quality of their predecessors to point the finger of blame at the failure to bring back the artistic talents involved in the original. However, such is not the case with Creepshow II – the script in this case is a three week-old rat turd that comes directly from the pen of Creepshow director George Romero. (Stephen King also gives his seal of approval by making a cameo appearance as a truck driver in the The Hitch-Hiker segment). In this case, Romero handed the directors chair over to Michael Gornick, his former cinematographer including on Creepshow, although Creepshow II would be the only film that Gornick ever directed.

George Romero the scripter is an enigma – his scripts for Martin (1976) and Night of the Living Dead (1968) are brilliant existential re-examinations of classical genre themes, his characterisations for Day of the Dead (1985) hold a rare poetry, and yet there are depths he sinks to, as here and in Monkey Shines (1988) and Bruiser (2000) where what he writes is shrill and hysterically moralistic in tone.

Anthology films always have a simplistic morality to them, a conservative outlook that holds that mousy people are better off remaining ignorant and downtrodden, and that bullies and shrews deserve nasty ends. EC Comics, and indeed the first Creepshow, played such with wicked lashings of black humour. However, since around the time of Rod Serling and The Twilight Zone (1959-64), most tv anthology shows have dropped the humour, which has left them merely standing on a moralistic platform.

Here George Romero’s characters – in particular, the teenagers in The Raft and Lois Chiles in The Hitch-Hiker – are made so overblown and despicable that their fate is invited from the moment they appear. In adding a gratuitous sadism and lacking any redeeming sense of black humour, Michael Gornick delivers these moral just desserts in a way that leaves an unpleasant aftertaste in the mouth.

Old Chief Woodenhead is the worst segment. The dialogue that George Romero writes has an excruciating awfulness and Michael Gornick’s pace is leaden. The segment would have been snappy at half the length but Gornick languishes over it like the piece were an epic where he tries to imbue every line with the deepest profundity. The sequence hits such an emotionally shrill peak, the dialogue is so ponderous and the score so emphatically overblown score that the result is ghastly.

The Raft is probably the best segment – more by default than anything else. It is occasionally well directed on Michael Gornick’s part with some okay but gratuitously nasty gore effects. However, the creature only looks like a black tarpaulin floating in the water. The segment features a twist ending that is the nearest Creepshow II ever comes to capturing any of the EC-esque black humour that ran through the original.

The Hitch-Hiker has the benefits of a good performance from Lois Chiles, although she struggles valiantly in a losing battle against the dialogue. However, the segment becomes so ludicrously overblown in the escalating wrecking of Lois Chiles’s car in her attempts to dispose of the hitcher that it earns far more on the laugh scale than ever does for its scares.

A further sequel was the universally derided Creepshow III (2006). A remake of the original was announced during the 00s and eventually emerged as the tv series Creepshow (2019- )..