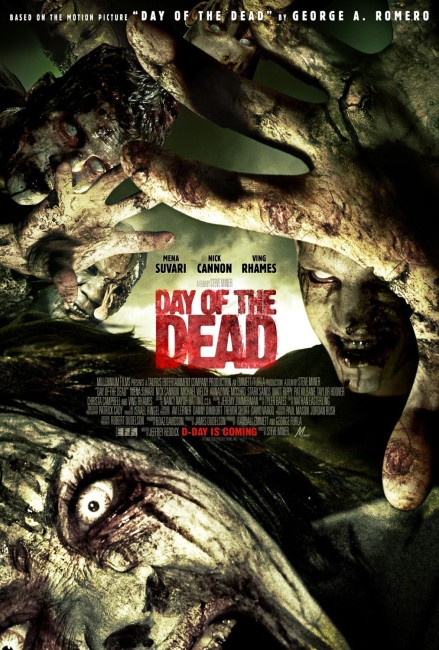 Corporal Sarah Bowman is part of a military unit dispatched to place her Colorado hometown under quarantine, although her superiors do not make the reasons for this clear. Visiting home, Sarah finds her mother ill and rushes her to hospital, only to find that the hospital is overrun with similarly ill people. While they are there, the infections accelerate and the infected turn into ravening, blank-eyed zombies that are hungry for the flesh of the living. The whole town is rapidly taken over by the zombies, which can only be stopped when their head is destroyed. Sarah and a handful of survivors flee the hospital and take refuge in an abandoned missile silo where they learn that the infection is due to biological experiments by the military.

Day of the Dead (1985) was the third of George Romero’s original Dead films, following Night of the Living Dead (1968) and Dawn of the Dead (1978). It was also the least successful of Romero’s zombie films, troubled by budgetary problems that made it a compromised vision of what Romero had originally intended. Nevertheless, Day of the Dead remains the most underrated of George Romero’s films, one where he turned his splatter driven effects into a hauntingly philosophical look at the slow death of humanity. The film contained some superb characterizations of a group of soldiers and civilians trapped in a vast underground bunker, suffering from cabin fever and at the end of their mental tethers.

Day of the Dead 2008 comes from Steve Miner, a director with a long if not particularly standout genre history. Miner began working as a production assistant for Wes Craven on The Last House on the Left (1972) and then went onto produce Cunningham’s Friday the 13th (1980). He made his directorial debut with Friday the 13th Part 2 (1981) and went onto helm the genre likes of Friday the 13th Part III in 3D (1982), House (1986), Warlock (1989), the Mel Gibson cryogenic sleeper awakes romance Forever Young (1992), Halloween H20: Twenty Years Later (1998) and Lake Placid (1999). With the exception of Warlock, most of this is unexceptional hackwork.

Day of the Dead 1985 is an unsung masterpiece. On the other hand, you can fairly much see where Day of the Dead 2008 is heading from the moment it opens. Instead of any of George Romero’s stunning metaphors for the doom of the human race, the opening scenes give us teens making out in a bunker. When we next get to Mena Suvari manning a roadblock and setting up a quarantine around the town, we realise that the basics of Romero’s Day of the Dead have been essentially thrown out the window.

In his version, Romero gave us a vision of zombies having overrun the Earth and outnumbering humans 400,000 to one and a handful of survivors hunkered in a bunker; here Steve Miner and Jeffrey Reddick, who previously wrote Final Destination (2000), have simply gone back and recreated the basics all over again and shown the beginnings of the zombie outbreak. (In the Romero original, all explanation of how the zombies had overrun the Earth could only be found by referring to the previous films). Where Romero created a film about isolation and explosive cabin fever that became a philosophical look at the end of humanity, Day of the Dead 2008 quickly becomes just another zombie film by the numbers.

Everything about Day of the Dead 2008 emerges as wrong in just about every way. The characters from the original have either been substantially curtailed or rewritten. Indeed, about all that the characters here have in common with their counterparts in the original any longer are their names. In the original, Captain Rhodes was a psychotic bully – a terrifyingly good performance from Joe Pilato. Here Rhodes merely becomes the commanding officer of the operation who is killed within the first few minutes and thereafter remains a zombie. (This oddly also marks Ving Rhames’ second appearance in the trilogy of Romero remakes – he having also appeared in Dawn of the Dead 2004).

We have a Dr Logan but he is no mad scientist, just a double-dealing medic who was partly responsible for the original outbreak but is never engaged in any experiments on the zombies. The bunker that was the oppressive all-surrounding setting for Day of the Dead 1985 does eventually turn up but it is no more than a convenient place that the survivors on the run use to hide.

The worst of the new characterizations is that of Bud (Bub in the original). In the original, Bub (a great performance from Howard Sherman) was a pet zombie experimented on by Dr Logan who had started to remember fragments of his life as a human; here Bud becomes a friendly soldier (Stark Sands) that we see going through the process of turning into a zombie, only to arrive at an appallingly sentimental scene where, having fallen for Mena Suvari, he remembers enough of his humanity to sacrifice himself to prevent her from being devoured.

One of the noticeable things that Day of the Dead 2008 has done is recast the original with a youth cast – the parts of Sarah, Salazar and Dr Logan from the original have been recast with actors under the age of 30, while there have been a good number of completely new roles created to add more young people to the mix. Most of these roles pass with thorough forgettability. The usually fine British actor Ian McNeice does an incredibly bad job of trying to affect a cowboy accent to play a hardnosed radio DJ. One of the more annoying performances in the film is that of Nick Cannon as Salazar, which Cannon plays by keeping up an annoying barrage of quips and one-liners throughout the film.

One of the good aspects about Day of the Dead 2008 – indeed about the only decent aspect – is the zombie makeups. We get the usual machetes and bullets in the head and various body parts and bodies being incinerated. Particularly good is the progressive degree of decay that we see Stark Sands undergo as he turns into the zombie Bud. Steve Miner opts to go with the modern fast-moving zombies that Zack Snyder introduced in Dawn of the Dead 2004, as opposed to Romero’s blankly shuffling dead, although this gets fairly silly when we get to the point of zombies scuttling along the ceiling. Miner’s set-ups are mostly routine, although there is one good scene with Mena Suvari being pursued through the air ducts by the legless Ving Rhames zombie.

Day of the Dead: Bloodline (2018) was a further sequel/remake also from Millennium Films.