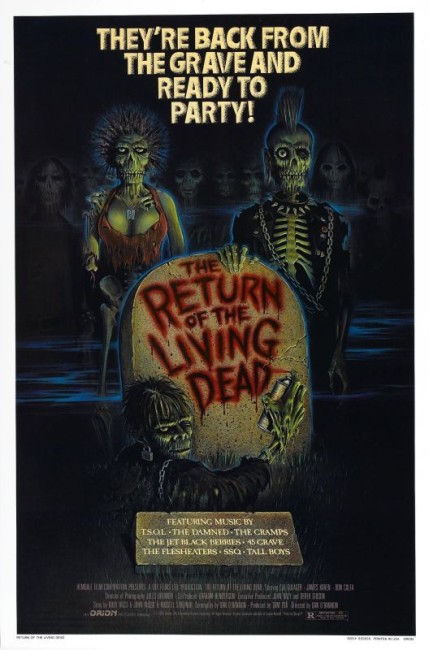 Morgue attendant Frank tells Freddy, the new guy on the job, that the story of ‘Night of the Living Dead’ was a fictionalisation of events that actually happened. He then offers to show him a canister of the military gas that supposedly caused the dead to revive. Hitting the canister to show how secure it is, he succeeds in rupturing it. The gas spreads throughout the morgue re-animating several exhibits and a dead body. As the body comes after them, they find they cannot kill it even when they cut it to pieces, and so they cremate it. However, rain washes the ashes down into the neighbouring cemetery, re-animating all the bodies there.

The other half of the copyright was retained by Russo, Steiner and Ricci. John Russo wrote a novel Return of the Living Dead (1978), although that is unrelated to this film. Russo made several attempts to film his novel but was unsuccessful in raising financing. The copyright was eventually sold, passing through various hands as a potential project, including Tobe Hooper of The Texas Chain Saw Massacre (1974) fame at one point.

Finally, the project ended in the lap of Dan O’Bannon. Dan O’Bannon had co-written Dark Star (1974) with John Carpenter, then had had huge success with his script for Alien (1979), and gone onto write a number of other well-received scripts. (See below for Dan O’Bannon’s other genre credits). O’Bannon initially wrote this script for Tobe Hooper and then took the project on as his directorial debut after Hooper passed on it.

The result emerges as a smart and snappy variant on George Romero’s Dead films. Not to mention a fresh and original injection into the zombie genre, which had been relentlessly worked by numerous, particularly Italian, B-budget filmmakers in the few years since Dawn of the Dead became a midnight favourite. The differences between Dan O’Bannon and George Romero’s approaches are immediately evident – O’Bannon’s zombies talk, move at normal speeds instead of a somnolent stumbling gait and take considerably more than being hit in the brain to be destroyed.

Nowhere are the differences more clearly evident than the approaches the two take – George Romero uses zombies to make sweeping social metaphors; Dan O’Bannon takes his approach with a sense of caustic humour that only becomes more hilarious the darker he makes it – everything anybody in the film tries to do about the situation only ends up making it worse. There are some blackly hilarious images of the zombified Thom Mathews chasing his girlfriend: “I can smell you brains, Tina. I love you Tina. I want to eat your brains.”

O’Bannon was sick of faceless teen victims in the contemporary slasher movie copycats of the day and deliberately casts his victims as punks and, with songs from The Damned, The Cramps, The Flesh Eaters and Jet Black Berries thrashing it out on the soundtrack, puts it all up front and goes for it with crude and rude abandon.

Dan O’Bannon is plainly interested in having some conceptual fun with the zombies – in one fascinating scene that becomes a tour-de-force of makeup effects, the half-rotted torso of a woman dragging her spinal column behind her is tied to a bench and tells how the zombies need to eat brains to stop the pain of dying. The turning of Thom Mathews and James Karen into zombies while still alive is an intriguing idea, although one that never fully comes off, with O’Bannon never explaining how the two continue to think with no blood pressure or heartbeat, although the image of James Karen lowering himself into a furnace is a poignant one.

Return of the Living Dead is also less of a gore film than George Romero’s Dead sequels, although the image, early in the film, of the longitudinally bifurcated half of a mounted anatomical dog come to life, lying whining on the floor, this author counts as one of the most stomach-churning moments from this era.

Dan O’Bannon’s other scripts are:– John Carpenter’s Dark Star (1974), a parody of a space mission where O’Bannon also plays one of the lead characters; Alien (1979); another zombie film Dead & Buried (1981); episodes of the adult animation anthology Heavy Metal (1981); the hi-tech helicopter action film Blue Thunder (1983); Tobe Hooper’s soul-sucking alien vampires film Lifeforce (1985); Hooper’s remake of Invaders from Mars (1986); the original script for Total Recall (1990); the Philip K. Dick adaptation Screamers (1995); and the horror film Hemoglobin/Bleeders (1997). The one other film that O’Bannon directed was the unsuccessful but worthwhile H.P. Lovecraft adaptation The Resurrected (1992). Also of note is the documentary Jodorowsky’s Dune (2013), which details O’Bannon’s work as special effects director on Alejandro Jodorowsky’s failed adaptation of Dune (1965) in the 1970s.

Return of the Living Dead also made the name of actress Linnea Quigley who plays one of the punkettes and has a memorable scene where she dances nude on a tombstone. Linnea Quigley quickly became the most famous of the so-called Scream Queens whose talent existed more in their ability to disrobe than act. Quigley appeared in films such as Creepozoids (1987), Night of the Demons (1987), Sorority Babes at the Slimeball Bowl-o-Rama (1987), Hollywood Chainsaw Hookers (1988), Sexbomb (1989) and Beach Babes from Beyond (1993), among numerous others.