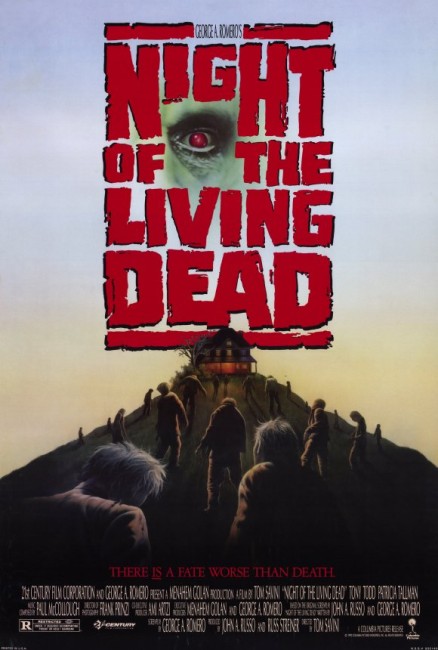 Barbara and Johnnie go to visit their mother’s graveside. There Johnnie is attacked by blankly stumbling men. Barbara flees and takes refuge in a farmhouse along with a number of other people. Gradually they come to realize that the dead are emerging from their graves and devouring the living. As they try to deal with the situation, tensions and bickering within the group prove almost as deadly as the dead beyond the barricaded doors.

The original has been adhered to very faithfully. Romero and Tom Savini figure that most people are familiar with the original so take time to re-explore it and smooth out the rough bits. Where it has been changed, it has been done with considerable thought. The far too obvious effect of using a tv as info-dump to convey information about the situation in the original has been replaced – in fact, Romero and Savini make a point of having the tv destroyed in a fight between Ben and Cooper – and replace it with a well-written scene where Ben simply explains the situation as he sees it.

In some ways, the times have forced changes on the film. The social situation has changed such that still having a Black man in charge can no longer be considered groundbreaking. More interestingly, the film slants Ben’s character so that, while not changing the fact that the character is still the one that makes the most sensible decisions in the film, the balance of sympathy is subtly altered so that the character seems to be at times just as hard-headed as Cooper. At one point, Romero has Judy and Tom threatening to throw both Ben and Cooper out of the house if they don’t stop arguing.

The most interesting change is in the character of Barbara who in the original spent the entire film in hysterics after seeing her brother killed at the beginning. This version takes a more feminist slant on the character, getting her to forcibly pull herself together. By the end, the new Barbara becomes a far more central character to the film than Ben – indeed, the remake can in some ways be seen to be trying to break ground for feminism in the same way the original did for Civil Rights with the character of Ben the Black hero.

Patricia Tallman gives a particularly good performance – with angular, spidery figure and narrow, sharply-boned face she even seems unusual, and when she gets fired up it is as though her body itself manages to unconsciously reflect both the anguish of her hysterics and the anger of her new self-determination. The moment when she stands up to the others telling her not to lose it and says, “Whatever I lost, I lost a long time ago and I do not plan on losing anything else. You can talk to me about losing it when you stop screaming like a bunch of two-year olds,” is a real showstopper.

One of the few irritating parts about this version is its miscuing of some of the familiar shocks. In this version, Barbara now makes it to freedom at the ending, while Ben holes up in the cellar and emerges in the morning – but this time he has died in the interim and is a zombie, so his being shot by the posse is without the cruel irony that the ending of the original had. The film also flubs the return of Johnny as a zombie – here Barbara merely finds his dead body in the back of a truckload of other dead zombie carcasses.

The film also continues on beyond Ben’s death – Cooper does survive, having hidden in the attic and when he emerges, Barbara shoots him and shrugs it off to the others, saying he was just another zombie – a scene that has more effect than Ben’s death does. However, the effect of the ending has been changed considerably – Tom Savini explores Romero’s posse in a series of striking images, turning it into a veritable circus accompanied by hotdog stands and barbecues, with hunters taunting zombies in a fenced-in ring and taking potshots at them hanging on the end of nooses. Unfortunately, Barbara’s line “We’re them, they’re us,” unsubtly hammers home a point that needs no reinforcing.

It is an ending that is considerably more upbeat than the original – this Night of the Living Dead is now a film about Barbara’s having to adjust to a world of survivalist values, to stand up and fight for herself in a world gone mad, something that is markedly changed in comparison to the bleakness of the original where even Ben surviving the night meant nothing.

Savini and Romero manage to have their cake and eat it too. The remake both changes the original, yet also replays it effectively too. Many scenes such as the initial attack of the zombies out of the blue at the cemetery and Barbara’s attempts to escape in the car while losing the keys work well again; and the trip to the petrol pump and Ben’s being abandoned outside with the zombies are both effectively replayed with minor changes.

For all that, the original is still the better film – the measure of difference is that this version, while good, lacks a genuine nightmare ambience and a to-the-death state of siege between the living and the dead. It is suspenseful and tense but never genuinely horrific. Part of the problem is that the black-and-white ambience of the original was in itself infinitely grimmer and starker than its replacement by colour is here. In that Tom Savini was responsible for the showcase visceral grotesqueries in Romero’s first two sequels to the original, this film is surprisingly tame in the gore department – even the scene of the zombies chewing on Tom and Judy’s corpses from the original is inexplicably missing here.

Night of the Living Dead is so far the only full-length film directed by Tom Savini. He has also directed several episodes of Tales from the Darkside (1982-5) and the Wet Dreams episode of the horror anthology The Theatre Bizarre (2011).