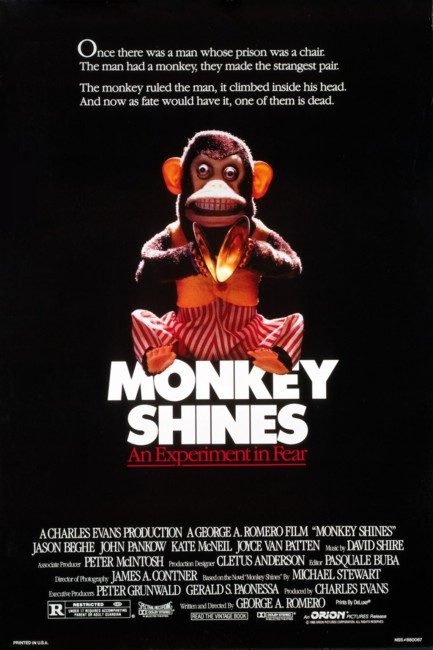 aka Ella; Monkeyshines: An Experiment In Fear

An accident leaves athlete Allan Mann paralysed from the neck down. His good friend, animal behaviourist Geoffrey Fisher, presents Allan with Ella, a monkey from his lab that he had trained to perform household tasks for him. Unknown to Allan, Geoffrey has been experimenting with a drug that has enhanced Ella’s intelligence. Soon Allan believes that Ella is capable of picking up his thoughts and desires and that they have a psychic link. As Allan becomes increasingly frustrated with the powerlessness of the state he is in, Ella starts going out and killing the people who are the focus of Allan’s anger.

For at least the 1970s and the 1980s, George A. Romero was one of the genre’s most promising names, having directed the horror film that became the midnight cult favourite of the 1970s – Night of the Living Dead (1968) and following it up with such fine, solid entries as The Crazies (1973), Martin (1976), Dawn of the Dead (1978), Creepshow (1982) and Day of the Dead (1985). However, from the late 1980s onwards, George Romero almost entirely dropped off the genre radar, having only directed one-and-a-half films – Two Evil Eyes (1990) and The Dark Half (1993) – in the entirety of the 1990s. Monkey Shines was the last of George Romero’s films to gain any substantial attention up until the sudden revival of his zombie films in the mid-00s.

Based on ecstatic advance reviews, one had high hopes for Monkey Shines, but when seen the results are disappointing. The film has an interesting central idea – sort of a variation on Forbidden Planet (1956) – of a paralysed man finding he is able to enact his suppressed anger through a psychic link with his monkey. However, when it gets down to it, Monkey Shines is only a better budgeted version of Herman Cohen’s The Black Zoo (1962), which had demented zoo keeper Michael Gough sending animals out to kill under his mental control. The idea swims with possibilities but George Romero’s treatment is pedestrian. The story feels like one cliche from beginning to end – is it worth betting that Jason Beghe and Kate McNeil are not going to fall for each other (although, Romero does include a sex scene between a woman and a paraplegic that contains an admirable degree of perversity), or that Jason Beghe will not regain control of his facilities just when needed? A storm accompanies the climax and so on.

George Romero can write some superb characterisation – as in Martin and Day of the Dead – but there are other times when he seems to lose it altogether – like here and his scripts for Creepshow II (1987) and Bruiser (2000) – and his characters slip into shrill one-dimensional characterizations where people are divided between being either good guys or total bastards/bitches who are set up as deservous victims. What one didn’t like in Monkey Shines is the film’s trying to have its moral cake and eat it too. Romero sets up these shrill mother and cheating girlfriend characterisations where we are supposed to cheer their demises on because they are despicable. The film centres around Jason Beghe’s suppressed angers towards these people as enacted by the monkey. The film then becomes not so much about a process of why this is happening as one where the audience is placed in the position of having to empathise with and cheer on these killings as deservous. This is fair enough – although, the film would have had been much better if it had stayed at a distance and created some sympathy for the victims and less empathy for Jason Beghe’s anger.

However, after this happens, Romero blurs his moral message and the blame for everything is placed on the monkey, which is acting as catspaw of the hero’s suppressed angers. The result is akin to somebody shooting a group of pimps and hookers and then people turning around and saying “it’s a good thing because the people were the detritus of society” and going on to blame the gun manufacturer for allowing this to happen while letting the killer to go free. A much more sophisticated ending would have had Allan having to confront the fact that the anger came uncontrollably from within himself and that in order to stop Ella from killing further he had to face killing the perfectly innocent monkey he loves in order to stop himself.

The climax is at least well directorially sustained in the confrontation between Jason Beghe and the syringe-wielding Ella, and makes for effective horror in conveying the helplessness of quadriplegic Beghe’s plight. However, the ending with Jason Beghe swinging a lump of fur back and forward in his mouth looks daft, and an epilogue has an absurdly unnecessary chest– or rather back-burster scene added to pointless effect.

Performances are so-so – Jason Beghe has either of two notes in his performance – bland, or narrowing his eyes and talking in a deadly voice; Kate McNeil does not even have the advantage of getting to narrow her eyes. Christine (Mrs Romero) Forrest’s nurse is amusing but, like Joyce Van Patten as Jason Beghe’s mother, the strained single-note of her character begins to weary. The only interesting performance of note is from John Pankow, if only because his character is more morally ambiguous in terms of the story’s black-and-white categorisations and that Pankow plays the part with a cocky recklessness while seeming to be going over the edge in terms of sanity. Well-placed up against him is Stephen Root whose cold and predatorily probing questions make for good villainy, even if the character is thrown away when no longer needed.