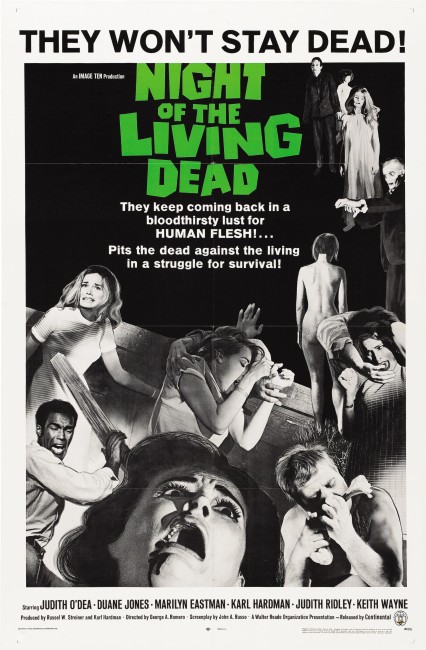 Barbara and her brother Johnny go to visit their parents’ grave. There a staggering, seemingly mindless man abruptly attacks them and kills Johnny. Fleeing, Barbara seeks refuge in a nearby farmhouse. There she is joined by a number of others who board the house up against the hordes of dead who have risen from the graves and now surround the house, hungry for the flesh of the living. On tv they learn that this may have been caused by a virus brought by a returning Venus probe. The rational Ben and the hot-headed Harry Cooper heatedly argue over their best means of safety within the house, but the conflict leaves them vulnerable to the dead outside.

It all began over lunch one day when George Romero and his partners in an advertising agency came up with the idea of making a film. Putting in $600 apiece, they brought a case of film and started shooting an idea based on a story Romero had written inspired by Richard Matheson’s classic vampire novel I Am Legend (1954), filmed as The Last Man on Earth (1964), The Omega Man (1971) and I Am Legend (2007). The Image Ten partners, as they called themselves, shopped about for finance and managed to raise a $114,000 budget. Night of the Living Dead, released in 1968, was the result. It was immediately hailed as a horror classic and became an unexpected success to all concerned and one of the most successful independent features ever made at the time, earning some $12 million in box-office rentals. A print was even added to the permanent collection at the Museum of Modern Art. (On a disappointing note, George Romero and associates saw little of the success, their naiveté in the world of distribution deals leaving the distributors walking away with all the profits).

Night of the Living Dead is a film that breaks every convention and taboo conceivable – it has themes of cannibalism; even patricide where we see a child feasting on its mother’s corpse at one point. At the time, even the idea of a Black hero was something new and revolutionary (although George Romero insists that there was so significance to it – Duane Jones was merely the best actor for the part they had available to them. Whatever the case, the film set up many racial resonances).

Night of the Living Dead is a horror film where all classical conventions have been shot out. In horror movies of the 1930s, 40s and 50s there was a sense of overriding morality, that the hero and the romantic interest would always survive and that whatever force threatening society there was would invariably be vanquished by the Army, divine provenance or heroic decency and ingenuity. In Night of the Living Dead, George Romero shoots out any sense of overriding morality that there usually is in a horror film, there are none of the usual securities that both horror film protagonists and audiences are given. Here the innocents and antagonists get butchered alike. The girl who looks like the nominal heroine at the outset, instead of becoming the romantic interest, quite realistically spends almost the entire film in catatonic shock at what she saw. In one of the most amazingly black endings imaginable, the hero manages to survive the night and emerges from the farmhouse to greet the return of civilised law and order as a sheriff’s posse arrives, only to be shot by them, thinking he is a zombie.

What is most disturbing about this is that there is no explanation given for the horror – there are one or two offered by the scientists, the rationalising saviours of the previous decade but they as much in the dark as the characters are. It is existential horror – horror that exists solely in terms of naked effect, discarded of classical conventions of drama, morality and explanation. The progenitor of these existential horror films was Alfred Hitchcock’s The Birds (1963), in which birds suddenly turn on humanity and start attacking en masse, but with no clear explanation offered as to why. This was followed by other films such as Steven Spielberg’s Duel (1971), Deliverance (1972) and The Texas Chain Saw Massacre (1974), which feature brutal assaults on ordinary people out of the blue without rhyme or reason offered as to why. Other films of the era such as Blow Up (1966) and The Picnic at Hanging Rock (1975) similarly set up mysteries to which they deliberately never provide solutions. Night of the Living Dead, with its sense of society being occluded and overrun by an irrational force that is devouring and tearing it apart, seems to potently echo the enormous sense of social upheaval that the US was going through in the late 1960s with assassinations of public figures, student riots and Vietnam protests.

Night of the Living Dead has become George Romero’s most acclaimed film. In terms of style, Romero was still sharpening his directorial skills and at times his direction is somewhat melodramatic and forced. The entry into the house, the discovery of the body on the stairs is shot with a staccato starkness in the black-and-white lighting effects and jagged camera angles of the old German silents and with a didactic, canned score out of 1940s film noir. The effect is crude, as it is in other places. On the other hand, there are also a number of remarkable scenes where George Romero evinces a starkly effective horror – the picture of the zombified little girl getting up and coming after her mother with arms outstretched and later found feasting on her body; the scene with Duane Jones trapped outside the house, facing a circle of zombies, with Karl Hardman refusing to let him back into the house; and the climactic break-in with Judith O’Dea being dragged through broken boards by her hair only to see her brother now as a zombie.

The real classic scene is the opening with the zombie attacking Johnny and coming after Barbara. It is a classic scene because it plays against so many conventions – it starts with the ordinary – Johnny complaining about having to visit their parent’s grave and his teasing her “They’re coming to get you, Barbara” – only to have the tables turn on him. We are without any warning suddenly plunged into a nightmare, one that has the sense of everything going wrong – the zombie battering around the car and fate perpetually tripping Barbara up – losing her shoe as she runs, getting into the car to find that she doesn’t have the keys. We have no idea why this is happening – this is only the first scene and its out-of-the-blue unexpectedness makes it all the more disturbing.

A colorised version of Night of the Living Dead was released in 1987. In 1998, Night of the Living Dead – The Thirtieth Anniversary Version was released featuring new footage shot especially for the occasion by original co-writer John A. Russo. This expands the beginning in detailing how the man who attacks Barbara and Johnny rises from the dead during a funeral, plus an ending with a preacher ranting about the zombies. While interesting, whether these scenes add anything to a classic is dubious and the result was certainly detested by all fans of the original.

George A. Romero’s subsequent genre films were:– Jack’s Wife/Season of the Witch/Hungry Wives (1972) about suburban witchcraft; The Crazies (1973), an underrated film about a madness-inducing biospill; Martin (1976), a superb deconstruction of the cinematic vampire myth; Dawn of the Dead/Zombies – Dawn of the Dead (1979); the Stephen King horror comic homage Creepshow (1982); Day of the Dead (1985); Monkey Shines (1988) about a psychic link between a paraplegic and a murderous monkey; Two Evil Eyes (1990), an Edgar Allan Poe collaboration with Dario Argento; The Dark Half (1993) from the Stephen King novel about a writer haunted by an evil doppelganger; Bruiser (2000) about a man whose face suddenly becomes a blank mask; Land of the Dead (2005), Diary of the Dead (2007) and Survival of the Dead (2009). Romero has also produced the Tales from the Darkside (1983-5) and Monsters (1988-9) horror anthology series, and executive produces and presents the anthology films Deadtime Stories (2009) and Deadtime Stories 2 (2010) and the remake of The Crazies (2010). His scripts include Creepshow II (1987), Tales from the Darkside: The Movie (1990) and the remake of Night of the Living Dead (1990).