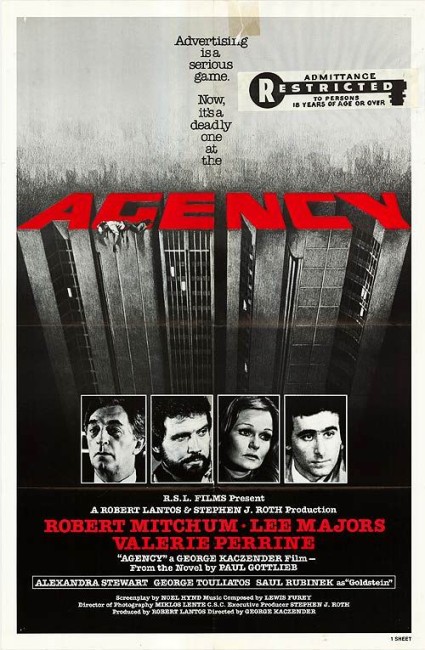 After the QP&S advertising agency is taken over, personnel start quitting en masse, citing creative interference. Investigating the suspicious suicide of a co-worker, creative director Philip Morgan uncovers a conspiracy on the part of a shadowy cabal to implant subliminal brainwashing messages in television commercials.

Agency jumps on the late 1970s fad about the perils of subliminal advertising – wherein it was theorised that advertisers were brainwashing people into consuming various products by inserting sub-audial messages in tv broadcasts or suggestive words and commands to buy hidden in photographs. The film here at one point even appropriates the famous controversy over the image of a naked woman supposedly painted into the ice cubes in an alcohol ad for its lecture on what subliminal advertising is.

What is meant to be going on is not revealed up until the end but by then the various lectures about what subliminal advertising is have unsubtly drained any surprise out of such a denouement. For all the possibilities inherent in the idea, the film avoids them and concentrates instead on standard thriller tropes – car chases, break-ins and so on. The film is drearily directed by tv director George Kaczendar who fails to create any situations that ever generate suspense.

The dialogue is all snub-nosed sub-Mickey Spillane quips – “This doctor must be a proctologist – he’s giving me a pain in the ass,” or “They injected me in the butt”, “Turn the other cheek.” The film’s most amusing sequence is where Lee Majors escapes two pursuers by pouting kisses at a group of bikers stopped at a railway crossing, inciting them to attack the car.

Agency was one of a handful of films made by expatriate Hungarian director George Kaczender who took up residence in Canada. His most well known film was probably In Praise of Older Woman (1978). His one other venture into genre material was Prettykill (1987), a detective thriller about the hunt for a serial killer. All of Kaczender’s work from the late 1980s has been in television.