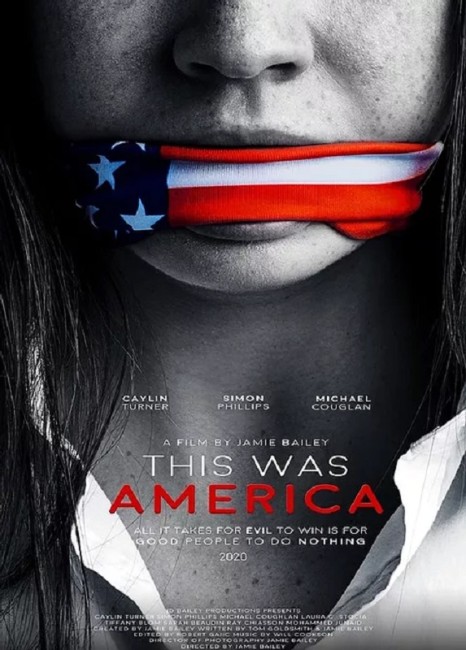 The USA, the year 2030. Donald Trump has refused to leave office after the 2020 election and has enacted a series of orders that has turned the country into a totalitarian state. These include the deportation of illegal immigrants. Seventeen year-old Violet Maine is now snatched by David, a British illegal, following her mother’s arrest by ICE. David removes Violet’s id bracelet to prevent her being tracked and insists that her only hope of being reunited with her mother is to come with him. The two of them set out for the Canadian border. An alert is placed out for Violet and they are pursued by an FBI bounty hunter. Unsure who they can trust or will give turn them in, their journey requires using cash and David pretending to be mute so as not to give away his accent.

Unless one lives in the alternate reality that is QAnon conspiracy – and it would appear that a substantial percentage of the US population does – the Donald Trump presidency was a dangerous nightmare. Its populist demagoguery, racial victimisation, the unashamed lies told in bare face, the blatant corruption, the sheer incompetence, not to mention the direct number of deaths – either in the Capitol Riots and the 400,000 dead due to the Corona Virus mismanagement – come with a mendacity, malevolence and moral cowardice that boggles the mind.

The surprise is that the reaction against the Trump presidency was so muted. There were a handful of films – Make America White Again (2020), Trump vs The Illuminati (2020) and This Was America here. This is in contrast to the presidency of George W. Bush, which was followed by the enormous success of Michael Moore’s Fahrenheit 9/11 (2004) and the swathe of politicised documentaries that came in its aftermath.

Where was the Fahrenheit 9/11 of the Trump era, I kept asking? Certainly, Michael Moore did release Fahrenheit 11/9 (2018) but it was nowhere near the huge hit its predecessor was. It is possible that some people feared the government’s reach such that they were scared of reprisals/censorship if they did make speak up. Remember how The Hunt (2020) was yanked from theatrical release because of its satiric depiction of conservatives being hunted by liberals after Trump damned it (without having seen it). Or perhaps in that most film these days has moved to streaming platforms, it might be that people found it hard to sell highly politicised works.

This Was America feels like an anti-Trump film that came out far too late in the game. It was released in October 2020, only three weeks before the election that threw Trump out of office. In fact it comes out sufficiently late in the game that the opening credits can make reference to Trump refusing to leave office and hand the reigns over to Joe Biden, which was being much speculated about in the run-up to the election.

My disappointment with This Was America was that for a film that gives the impression it sets out to tackles the Trump presidency full-on, it very rarely engages with any political debate about the manifold crimes of the Trump White House. The only real one it tackles is a non-issue. It gets irate about the issue of illegal immigrants being deported – however this seems the wrong issue to take up given that deportation of illegals has been US government policy for decades before Trump came into power. Certainly, the film creates speculative technology about id chip bracelets used for tacking and a dystopian sense of ever-present fear where people are encouraged to turn in undocumented persons.

The bulk of the story is taken up with the father and daughter on the run. This feels like a series of generic tropes from almost any Dystopian Film that frequently feature plots with two lovers on the run from a cruel system. Variants on the trope appear in everything from various versions of Nineteen Eighty-Four (1949) through Fahrenheit 451 (1966) and THX 1138 (1971) to Logan’s Run (1976), Equilibrium (2002) and The Humanity Bureau (2017). This shuffles around a series of well-worn tropes about fugitives on the run and there is little more to it as a story than that. What I was expecting was some kind of devastating/blistering attack on the Trump White House but this never comes. At least Simon Phillips and Caylin Turner strike up a likeable rapport on screen – the restaurant scene where he is pretending to be mute is particularly amusing.

The other weird thing is that for an anti-Trump film, This Was America was actually made in Canada. The lead actor is British, while the director and most of the rest of the cast is Canadian. Even though the landscape being travelled through is supposed to be America, the cars have Ontario plates, the phone numbers in the background come with a 416 area code (Toronto area) and we can see maple leaf signs on the various brands in the background.

Canadian director/producer Jamie Bailey had previously made a couple of documentaries. He had previously collaborated with British actor, director and producer Simon Phillips on the tv series Age of the Living Dead (2018- ).