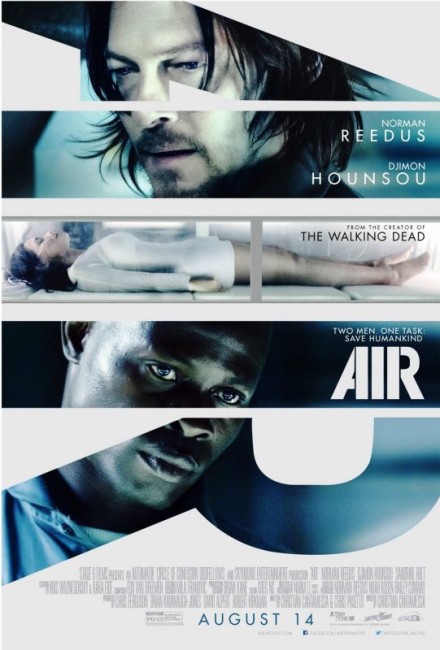 The world has been devastated and key scientists are kept in cryogenic suspension in vast bunkers beneath ground. Bauer and Cartwright, two technicians who tend the sleeping scientists, are woken from cryo-sleep for their six monthly check-up on the systems and to assess the quality of the air on the surface. As they set about their routine within the 90-minute window they have, one of the cryogenic chambers they sleep in short circuits. Within the short amount of air they have left, they try to find replacement parts. However, a venture into the other parts of the facility reveal that everything they believe is not as it seems and pits the two men against each other.

Air is a debut film for US director Christian Cantamessa who had previously worked as a writer for several videogames. Most notably, he had previously directed the videogame Middle-Earth: Shadow of Mordor (2014).

As it opens, Air seems to hold a certain promise – it is a two person drama (well okay three if you want to count Sandrine Holt but she seems to only exist inside Djimon Hounsou’s head and pops up to hold conversations with him from time to time); it is a chamber drama – a cryogenic bunker where the people there may be the only ones left alive in the world. The film offers up some great dramatic hooks – the two men awakened to perform routine maintenance duty only for a malfunction to destroy one of the cryo-tubes they sleep in and they forced to find a solution within the limited amount of emergency air they have been allotted; the revelation that what they believe they have been doing for years may not be what is actually going on.

On the other hand, you feel like Air has grist for a dramatically gripping science-fiction scenario but lets it slip through its hands. For one, the greater part of the first half of the film takes place with almost nothing happening. We watch the two men going about their duties, grizzling and griping about the tedium of what they have to do. The surroundings are singularly drab – what look like no more than a room and some tunnels in some industrial facility.

Norman Reedus might be a hot name at the moment on the back of tv’s The Walking Dead (2010– ) but the character he plays seems scruffy – all grizzled stubble and lank hair hanging across his face – and lazy in attitude, not exactly a figure that automatically draws sympathy or interest towards him.

I kept waiting for the film to do something interesting and put some twists on the situation but even when there start to be problems the film does very little to rack up the dramatic tension and continues on only with the same drab bitching between two working stiffs.

The film picks up somewhat during the latter half. There is some tension during Djimon Hounsou’s venture through the tunnels and with the two men shooting at each other. The film seems to build these scenes up in a big way – Norman Reedus discovers a secret about Djimon Hounsou that makes him want to kill him, the suggestion that everything is not as they have been led to believe it is – but the film lets these twists dissipate without making them into anything interesting. We never learn what happened to the other shelters; while what upsets Norman Reedus so much that he starts shooting is held from us until the very end and then turns out to be not much of a surprise at all.