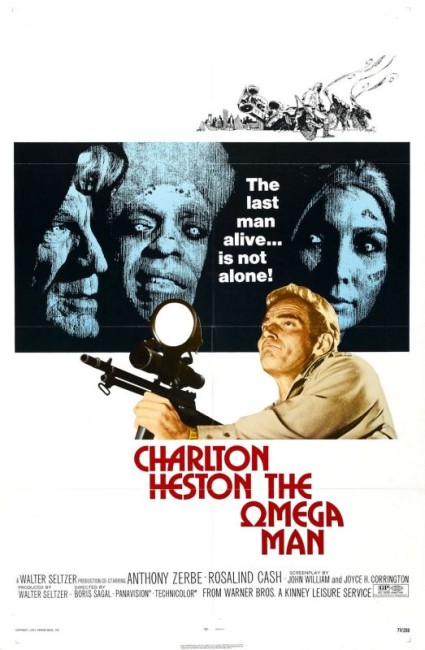 The year 1975 in the ruins of Los Angeles. The entire world has been killed off by bacteriological warfare, all except for one man, Robert Neville, a research scientist who has managed to inject himself with an antidote he developed. At night, Neville’s home is besieged by the mutated survivors, who have been turned albinoid and made vulnerable to sunlight by the plague. The mutants belong to a cult that is led by Matthias, a former tv newscaster who invokes them to destroy everything that belongs to the society that created them. Neville then encounters a group of unaffected survivors and realises that his blood may prove the means of saving them before they succumb to the effects of the plague.

Richard Matheson’s I Am Legend (1954) is a classic genre novel. The novel, which widely differs from this film adaptation in many essential details, concerns the last man left alive on Earth who nightly faces a horde of vampires, the mutated remnants of humanity, who gather outside his door, imploring him to come out and surrender to them. The ending, wherein comes a startling conceptual reversal of the traditional relationship between vampire and hunter, is stunning.

I Am Legend has been often in the cinematic eye. Hammer Films brought Richard Matheson to England in 1957 to write an adaptation to be called Night Creatures but this was cancelled due to censorship problems. Matheson later wrote (under a pseudonym) the Italian-made adaptation The Last Man on Earth (1964), which is very faithful to the book but a dull film. Next came The Omega Man.

Other versions were announced in the mid-1970s, while in the 1990s Tracy Tormé, scriptwriter of Fire in the Sky (1993) and Sliders (1995-2000), toyed with getting an adaptation off the ground and then there was the announcement of a big-budget adaptation with Ridley Scott at the helm and Arnold Schwarzenegger starring, although neither of these emerged. This went through several directors and stars – and was at one point to be directed by Michael Bay – before being revived as I Am Legend (2007) with Will Smith and directed by Francis Lawrence, which abandoned the source novel and disappointingly just remade The Omega Man. I Am Omega (2007) was also a cheap uncredited ripoff of the latter.

Unfortunately, The Omega Man is a ham-fisted adaptation of I Am Legend. For one, the vampires have been eliminated and rewritten as mutants, as though vampires were considered too B-movie. They are now construed as a cult who want to destroy all remnants of technology. (The cult was no doubt added due to the then public fascination with Charles Manson – and are even named The Family like Manson’s cult was). The vampire leader Ben Cortman goes from Neville’s work colleague to a tv newscaster Matthias (Anthony Zerbe).

They certainly cut striking figures in black hoods, sunglasses and with white albinoid faces – but make no sense. It is difficult, for instance, to see what stops them from simply breaking into Neville’s apartment – in the book, they were unable to because the house was shielded with garlic and mirrors. Ruth’s conversion, which takes minutes, seems an almost instant physical transformation into not only an albino but also a member of the cult – it is hard to understand how a mutation would also instantly change someone’s organisational affiliations as well.

The film sort of incorporates some of I Am Legend‘s classic final scene where Anthony Zerbe says to Charlton Heston: “You killed three of us. It is you, Mr Neville, who are the angel of death” – however, this is a throwaway line that lacks the true irony of such a meaning in the book where it was seen that Neville became to the new vampire people the same monster that humanity traditionally regarded the classic vampire as.

The film keeps and expands on the idea from The Last Man on Earth that Neville is a biochemist who created a cure for the plague and inoculated himself. The film also introduces the Ruth equivalent early in the show – only 30 minutes in – whereas if this were being faithful to the book, she would not appear until the last 30 minutes. Interestingly, it casts her with African-American actress Rosalind Cash – in so doing, making the relationship between her and Charlton Heston one of the first interracial ones seen in a mainstream US film.

In the early sections of the film, director Boris Sagal does a reasonable job of creating images of isolation as Charlton Heston prowls an empty L.A.. The film opens on a great series of images – panoramic wide-angle views looking down from the sky on the deserted streets; Heston’s car breaking down and he just taking a brand new car from a showroom and driving right through the plate glass window; he imagining hearing telephones ringing in his head; an open armoured car left abandoned with money blowing in the street. It is not a literal translation of what Richard Matheson wrote but could almost be something straight out of the book. During these scenes, the film gets the spirit of the original spot on.

These scenes are modestly effective, although a film like The Quiet Earth (1985) does a far better job of portraying the psychological isolation and madness that being the last survivor of the human race would entail. The film also casts Charlton Heston in square-jawed heroism mode. Thus we get no sense of hero’s loneliness and despair. Instead, we get Heston dressing for dinner in a velvet frock coat and making wisecracks over a chess game with a bust of Caesar. To me, this a betrayal of the book where the last survivor was someone utterly haunted by loneliness. We do get scenes of the mutants begging Neville to come out but still no corresponding sense of his utter isolation.

Alas, The Omega Man loses itself after the introduction of the community of survivors. What we get is very much a fantasy of the hippie era – in particular, the image of Charlton Heston sitting in an abandoned cinema watching and reminiscing over Woodstock (1970). (There is a certain irony in watching these scenes today – the images of anti-war protestors and hippies celebrating peace and love are almost the complete opposite of the views that Heston adopted in later life as an ardent spokesman for the NRA).

The film is also filled with resonance of Biblical imagery. The final scenes descend into clumsy allegory with allusions made between Jesus Christ and Charlton Heston shedding his blood to save humanity – the film even ends with Heston literally sacrificing his life to save the world, lying in a fountain in a crucifixion pose with a spear penetrating his side. This also plays into Heston’s cinematic association with Biblical roles especially that of Moses – the end of the film has him leading a group of love children away to peace and freedom.

The group includes Paul Koslo as an Easy Rider (1969)-type biker anti-hero and Rosalind Cash with bandana and machine-gun bringing associations of the Black Power movement. While post-holocaust films from Mad Max 2 (1981) onwards co-opted imagery of the Western, the post-holocaust films of the 1970s – the likes of Gas-s-s; or It Became Necessary to Destroy the World in Order to Save It (1970), Glen and Randa (1971) and Zardoz (1974) looked to the idea of remaking the world by way of Love Generation, celebrating the ideals of communalism and altered states headspace. The interestingly radical idea that The Omega Man offers up is in saying that civilisation has fallen and that the hope of the future lies in the political radicals and anti-establishment youth figures of the 1960s.

The Omega Man is the most well known film of Boris Sagal, a prolific tv director. Boris Sagal’s other genre outings include a tv play remake of The Spiral Staircase (1961), The Helicopter Spies (1968), a feature film re-edited from episodes of The Man from U.N.C.L.E., Hauser’s Memory (1970) and World War III (1982). Sagal died in a helicopter crash in 1981. He is also the father of Katey Sagal, alias Peg Bundy of tv’s Married … With Children (1987-97) and the voice of Leela on Futurama (1999-2003). The script comes from husband and wife screenwriting team of John William and Joyce Hooper Corrington who later wrote the last film entry in the classic Planet of the Apes saga with Battle for the Planet of the Apes (1973), as well as the tv movie Killer Bees (tv movie, 1974) and Nightfall (2000).