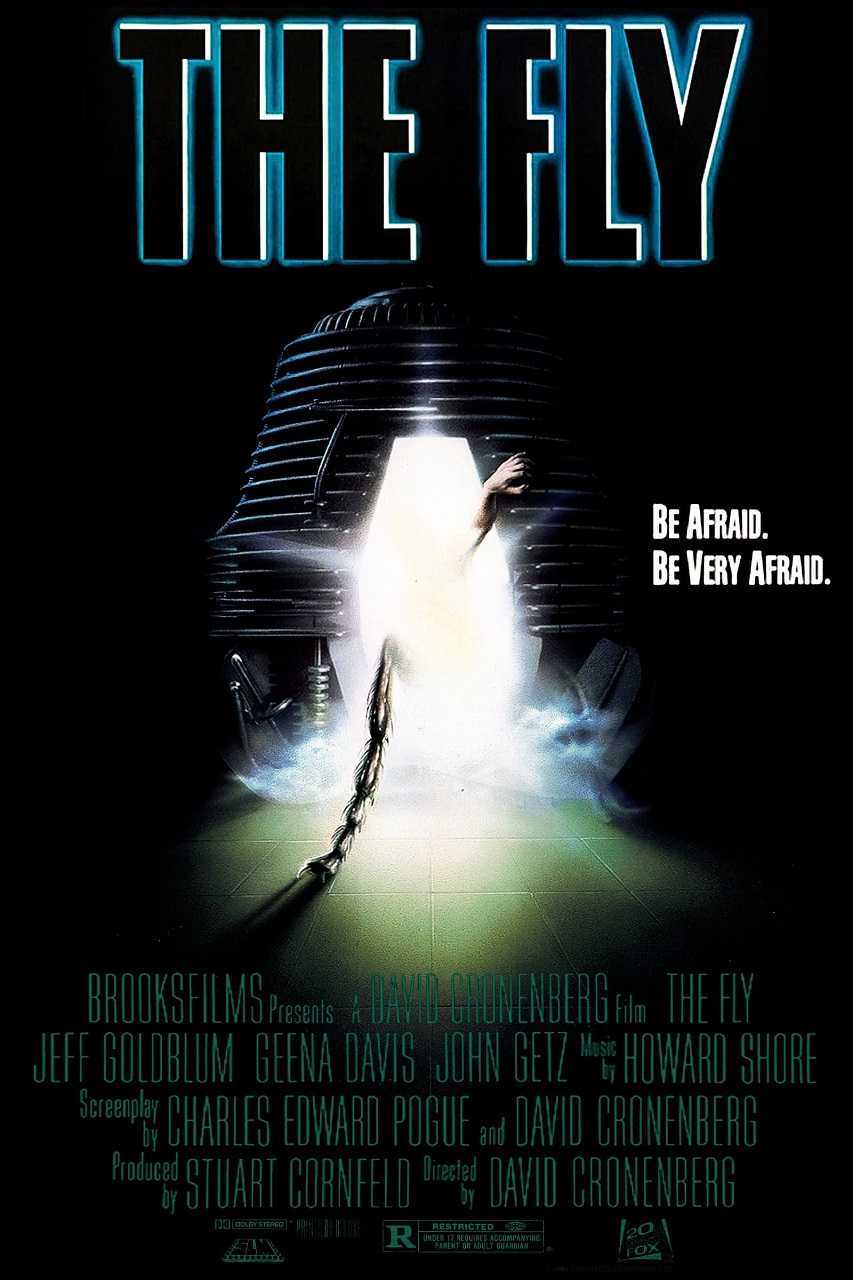 Scientist Seth Brundle meets journalist Veronica Quaife at a scientific conference and tempts her into coming back to his lab to see his revolutionary design for a teleportation device. He persuades her to move in and watch as he irons out the final bugs and for her to write an article about it. The two become lovers. Determined to prove that the device works, Brundle climbs into the telepod and transmits himself. The teleportation is successful. Afterwards, Brundle demonstrates amazing physical stamina. However, in the following weeks he begins to develop a bad case of eczema and then body parts start dropping off. He then discovers that during the teleportation both he and a housefly that was trapped in the telepod were reintegrated at a basic molecular level and that he is now transforming into a human/fly hybrid.

In pre-release interviews for The Fly, writer/director David Cronenberg recounted a witty story about how as a child he entered a promotional competition when the original The Fly (1958) came out, which challenged people to prove that the film’s premise was not scientifically possible. He succeeded – not a particularly hard task (see discussion of the problems inherent in the original at the above link), but was failed by the theatre management. Twenty-eight years later with this remake, Cronenberg was allowed the best possible comeuppance in a way that the theatre management of the time would never have believed possible.

The Fly 1986 came out amid a host of mid 1980s remakes of classic 1950s science-fiction films. In its own way, the original The Fly was a classic monster movie but its science amok polemics and pitiful “help me, help me”‘s were not enough to stand up in the 1980s; David Cronenberg realises this but he is not interested in making any 1950s type of film. Rather than parodying, quoting or deconstructing the original, Cronenberg takes the basic idea and reworks it in much more fascinating directions.

In his version, Cronenberg has thrown out the substantial illogicities and implausibilities that came in the original’s script – that of a fly and a man ending up with either’s body parts jumbled up – and instead makes a much more credible story about the fusion between the two into a hybrid entity. His is a darker, inner vision of the story where the original idea has been colluded with Cronenberg’s frequent bodily horror obsessions. It is more akin to Franz Kafka’s Metamorphosis (1915) but with more slime.

David Cronenberg’s films are unique mad scientist films. In the 1930s and 40s, mad scientist films were filled with the shock of science going amok and of unleashed monsters wreaking devastating influences on society. In Cronenberg’s films, monstrosity and transformation always has an ambiguity. Cronenberg’s scientists and victims seem to throw themselves at the process of transformation and mutation with fascinated curiosity, ecstatically welcoming their fusion into Other – the sexual ecstasies found in the mutilation of human flesh by auto accident in Crash (1996) or of being taken over by fetish-creating parasites in Shivers (1975). Jeff Goldblum’s Seth Brundle here looks on with a wryly amused air of scientific curiosity, keeping his fallen-off body parts in the bathroom and making sardonic comments about turning his medicine cabinet into “the Brundle Museum of Natural History.”

Some people read The Fly 1986 as a metaphor for AIDS, which a plausible case can be made for, although AIDS was only just emerging into the public spotlight when the film was made. Rather, the film seems to echo and mirror Cronenberg’s peculiar Manichean fascinations with the body as a battleground where the will can operate in one direction but the body can frequently rebel or be taken over by other forces – like the images of people being turned into human VCR’s in Videodrome (1983) or psychological repressions forcing themselves into expression in human flesh in The Brood (1979).

For the title creature, Chris Walas created a triumphant mass of rubber latex – which runs all the way from a few unsightly hairs to full mechanical creatures. (Chris Walas won that year’s Academy Award for his work). Unlike its sequel The Fly II (1989), which was in fact directed by Walas, the film finds a character inside all the latex. Here Jeff Goldblum gives a joyous, live-wire performance, which adds a perverse streak of humour to the transformation. Goldblum has rarely been better in a part.

Most fascinating is the weirdness with which Cronenberg and Jeff Goldbum take the obsession, turning Brundle literally, behaviourally into a twitching hyper-kinetic fly, needing to consume large amounts of sugar and stomach-churningly dealing with the problems of digesting solid foods. (Although one illogical move has Goldblum scaling the walls and ceiling just like a fly would – flies are only able to do so by surface-tension and in having such a minimal body weight, something a human would be too big for). In the final vision, with the Brundelfly turned into a pitifully crying bio-mechanic fusion melded with the telepods, the film achieves a peculiar kind of poetic revulsion, as though it were taking classical mad scientist, creation and laboratory and dissolving them into one.

There is a small tendency to go in for unnecessary gore that cheapens the film occasionally, particularly a dream scene where Geena Davis gives birth to giant slug. (One can also note Cronenberg in the dream sequence cameoing as a gynaecologist, a move that foreshadows the culmination of his gynaecological obsessions in his next film Dead Ringers [1988]). The beautiful pale photography of Mark Irwin and the dark, brooding score of Howard Shore is also worthy of note.

David Cronenberg’s other films are:– Stereo (1969), a little-seen film about psychic powers experiments; Crimes of the Future (1970) set a future where people have become sterile and developed strange mutations; Shivers/They Came from Within/The Parasite Murders (1975) about parasites that turn people into sexual fetishists; Rabid (1977) about a vampiric skin graft; The Brood (1979), a remarkable film about experimental psycho-therapies; Fast Company (1979), a non-genre film about car racing; Scanners (1981), a film about psychic powers; Videodrome (1983) about reality-manipulating tv; The Dead Zone (1983), Cronenberg’s adaptation of the Stephen King novel about precognition; Dead Ringers (1988), Cronenberg’s greatest film, about two disturbed twin gynaecologists; M. Butterfly (1993), a non-genre film about a Chinese spy who posed as a woman to seduce a British diplomat; Crash (1996), Cronenberg’s adaptation of J.G. Ballard’s novel about the eroticism of car crashes; eXistenZ (1999), a disappointing film about Virtual Reality; Spider (2002), a subjective film takes place inside the mind of a mentally ill man; the thriller A History of Violence (2005) about an assassin hiding under a different identity; Eastern Promises (2007) about the Russian Mafia; A Dangerous Method (2011) about the early years of psychotherapy; Cosmopolis (2012), a surreal vision of near-future economic collapse; and the dark Hollywood film Maps to the Stars (2014). Cronenberg has also made acting appearances in other people’s films, including as a serial killer psychologist in Clive Barker’s Nightbreed (1990); a Mafia hitman in To Die For (1995); a Mafia head in Blood & Donuts (1995); a member of a hospital board of governors in the medical thriller Extreme Measures (1996); as a gas company exec in Don McKellar’s excellent end of the world drama Last Night (1998); a priest in the serial killer thriller Resurrection (1999); and as a victim in the Friday the 13th film Jason X (2001).

Screenwriter Charles Edward Pogue has also delivered a number of genre scripts, including The Hound of the Baskervilles (1983), Psycho III (1986), DragonHeart (1996), Kull the Conqueror (1997) and Hercules (tv mini-series, 2005), as well as a host of Sherlock Holmes tv movies.