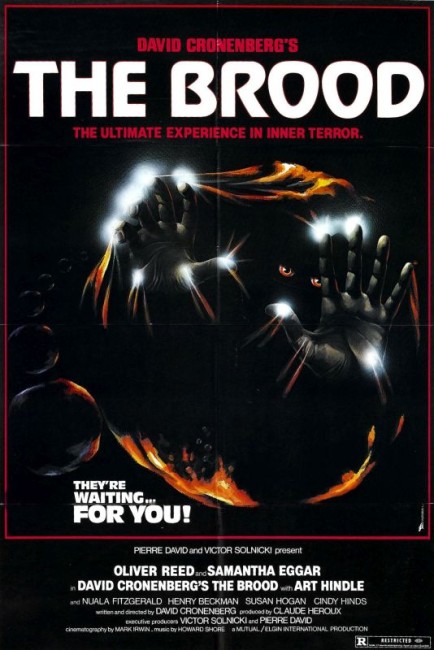 Frank Carveth’s wife Nola is a patient at the Somafree Institute, headed by the charismatic Dr Hal Raglan. Raglan preaches the radical therapy of psychoplasmics, which encourages patients to manifest their suppressed angers through their bodies. When Frank picks up his daughter Candy after she has been visiting Nola, he is disturbed to find her badly bruised. Trying to get in to see Nola, he encounters a wall of refusals from Raglan who insists that Nola’s seclusion from him is essential to her treatment. At the same time, a strange group of mutant children appear and kill Nola’s parents and all those who have incurred Nola’s wrath. As Frank finally penetrates the walls of Somafree, he begins to understand that the children are the psychoplasmic manifestation of Nola’s anger.

The Brood was David Cronenberg’s first great film, the point where he can be identified as someone who is not merely an interestingly perverse B-movie director but someone whose movies bristle with a dazzling intelligence. The Brood was slammed much when it came out – even surprisingly by many genre critics who later championed the Cronenberg cult – for its supposedly repellent elements. By then, Cronenberg had clearly not transcended B-movie labeling and attained the critically celebrated status that he holds today.

To the contrary of his contemporary naysayers, Cronenberg has for the most part trimmed back on the wilful grotesqueries that drove both Shivers and Rabid – The Brood is a film driven by its ideas, not its gory set-pieces. There is however a remarkably perverse climactic scene – the one that everybody found repellent – wherein Samantha Eggar opens her gown to reveal the sores and baby sac attached to her body and then proceeds to bite into the sac and lick the bloody afterbirth off the baby.

In one interview, David Cronenberg wryly referred to The Brood as his Kramer vs Kramer (1979) – the Dustin Hoffman-Meryl Streep child custody film that was released the same year as this and ended up winning the Best Picture Academy Award. It is not an untoward comparison, particularly in that later in the same interview Cronenberg revealed that the film was fuelled by the messy divorce he was going through with Margaret Hindson at the time.

Thus The Brood seems the most personal of David Cronenberg’s horror films – there is a genuine anger and bitterness that propels the film as Cronenberg metaphorizes his divorce, spiralling down into a dark subtext of custody battles and bitter resentment. In Cronenberg films, people are never treated as insane or evil – but the sole exception is the Nola character here (symbolically Cronenberg’s wife), who is cast with the hauntingly wide-eyed Samantha Eggar – and with brutal pragmatism the only answer Cronenberg has is for Art Hindle’s husband to strangle her with his bare hands to stop her destroying their child.

In a satiric escalation of various child therapies, each person in the film is trapped in a domino chain of causal traumas. In the film’s most blackly despairing moment, Cronenberg has Art Hindle throwing up his arms wondering how far a sane person must be expected to go in being called responsible for the possible trauma they might inflict on children – we see that Samantha Eggar’s hatred is caused by her mother Nuala Fitzgerald and by the end she in turn has passed that onto daughter Cindy Hinds.

In Cronenberg’s early films there is a certain emotional detachment from the victims, but here the feeling is reserved for the child – the look of numb catatonic terror on Cindy Hinds’ face as she tries to hold a door closed as it is battered from the other side by the brood is disturbing. The most chilling image in the film is the final fadeout on the sores now growing on Cindy Hinds’ arm.

Cronenberg’s concept of psychoplasmics carps at seventies pop psychotherapies like est and psychodrama in a way that seems disturbingly plausible – Cronenberg has jested that if he fails as a filmmaker he could always set up his own Institute of Psychoplasmics, and there is something that makes one think that he might not be entirely joking. After all, almost all of David Cronenberg’s films seem to contain battles where the mind is struggling with the body and all manner of forces that are trying to manifest themselves through the flesh.

Until the greater complexities of Videodrome or Seth Brundle in The Fly and the Mantle twins in Dead Ringers, Dr Hal Raglan remained the most ambiguously complex of Cronenberg’s characters. In a David Cronenberg film, there is no such thing as simply a mad scientist. In fact, the term “mad” must simply be an archaic moralisation; rather a scientist is both an opener of terrifying new ways and important new conceptual breakthroughs. The fact that he is obsessed beyond rational and moral limits should actually be regarded as an advantage. Cronenberg’s scientists stretch out to the perverse aspects of discovery with open arms, and Cronenberg is perfectly sympathetic to their motives and the discoveries, never ever standing back to indict them. As Raglan, in clipped voice and of dynamic, electrifying confrontations, this would be one of Oliver Reed’s last great roles.

David Cronenberg’s other films are:– Stereo (1969), a little-seen film about psychic powers experiments; Crimes of the Future (1970) set a future where people have become sterile and developed strange mutations; Shivers/They Came from Within (1975) about sexual fetish inducing parasites; Rabid (1977) about a vampiric skin graft; Fast Company (1979), a non-genre film about car racing; Scanners (1981), a film about psychic powers; Videodrome (1983) about reality-manipulating tv; The Dead Zone (1983), his adaptation of the Stephen King novel about precognition; The Fly (1986), his remake of the 1950s film; Dead Ringers (1988) about two disturbed twin gynaecologists; Naked Lunch (1991), his surreal adaptation of William S. Burroughs’ drug-hazed counter-culture novel; M. Butterfly (1993), a non-genre film about a Chinese spy who posed as a woman to seduce a British diplomat; Crash (1996), Cronenberg’s adaptation of J.G. Ballard’s novel about the eroticism of car crashes; eXistenZ (1999), a disappointing film about Virtual Reality; Spider (2002), a subjective film takes place inside the mind of a mentally ill man; the thriller A History of Violence (2005) about an assassin hiding from his past life; Eastern Promises (2007) about the Russian Mafia; A Dangerous Method (2011) about the early years of psychotherapy; Cosmopolis (2012), a surreal vision of near-future economic collapse; and the dark Hollywood film Maps to the Stars (2014). Cronenberg has also made acting appearances in other people films including as a serial killer psychologist in Clive Barker’s Nightbreed (1990); a hitman in Gus Van Sant’s To Die For (1995); a Mafia head in Blood & Donuts (1995); a member of a hospital board of governors in the medical thriller Extreme Measures (1996); as a gas company exec in Don McKellar’s excellent end of the world drama Last Night (1998); and a priest in the serial killer thriller Resurrection (1999); and a victim in the Friday the 13th film Jason X (2001).