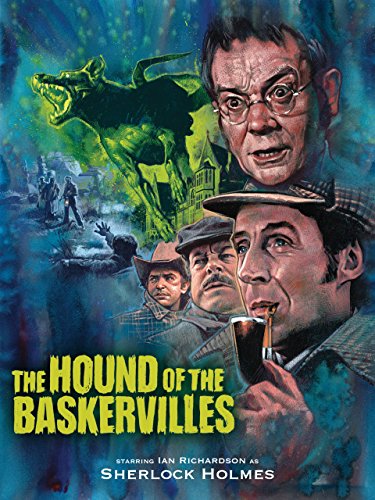 Sherlock Holmes and Dr Watson receive a visit from Dr Mortimer. He tells them of the curse of a ghostly hound that kills all the members of the Baskerville family line. The hound appears to have been responsible for the recent death of Sir Charles Baskerville. His heir Sir Henry is now about to arrive from America and Mortimer fears the same fate will befall him. As Holmes investigates, some agency seems to be trying to kill Sir Henry. Holmes sends Watson on alone to Baskerville Hall in Devonshire. There Watson becomes embroiled in the doings of a number of mysterious figures lurking about the estate and moors. At the same time, a glowing, ghostly hound seems to be trying to kill Sir Henry.

After first appearance in the novel A Study in Scarlet (1887), published in Beeton’s Christmas Annual magazine, Sherlock Holmes has indisputably become one of the iconic characters of popular fiction. Almost every detective story since then draws on the model that Arthur Conan Doyle (1859-1930) set down of the detective as ratiocinator extraordinaire. During his lifetime, Doyle wrote 57 Sherlock Holmes short stories and four novels (although there have been a myriad of Holmes pastiches from other writers since then, not to mention over 250 different actors playing the part in numerous films and tv series).

With this version, the rights to the book had been obtained by US producer Sy Weintraub, most known for producing seven fairly good Tarzan films during the 1960s. Weintraub planned to make a series of theatrically released Sherlock Holmes films that adhered closely to the original Conan Doyle stories. The only two films that emerged from Weintraub were The Hound of the Baskervilles and the subsequent The Sign of Four (1983), which also starred Ian Richardson (although recast Dr Watson with another actor). However, the rights to the Sherlock Holmes stories had just come into public domain in England in 1980 (fifty years after Conan Doyle’s death) and Granada Television started up their The Adventures -, The Return – and The Casebook of Sherlock Holmes (1983-7) tv series starring Jeremy Brett. Unhappy about this, Weintraub cancelled plans to make any further films. The Hound of the Baskervilles did receive some limited theatrical screenings but was mostly seen by the rest of the world as a tv movie.

Sy Weintraub and co deliver a solid and effective adaptation of the Conan Doyle novel. Charles Edward Pogue’s script follows the text of the original point for point in almost every regard – and more so than any other version of the story seen to date. About the only area I picked up that it strays from the text is the inclusion of Inspector Lestrade – Lestrade does turn up much later in the book but the film adds several meetings between Watson and Lestrade in the village post office, which are played for comedy.

In many regards, this version of the story is surprisingly traditional. Ian Richardson has clearly modelled his performance on Basil Rathbone in the Universal Sherlock Holmes of the 1940s, giving us another variant on Holmes with a piercing intellect and as a jolly man of the British aristocracy. By contrast, other adaptations from this point onwards tend to amplify Holmes’s psychological quirks or make him rude and intolerable. Donald Churchill’s Dr Watson is still portrayed as the same middle-aged old duffer that he was in most Holmes adaptations up until the 2000s.

Sy Weintraub and co have shot the film with a series of lavish period dressings and costumes. They head to real country estates and the moors of Devon to stand in for the locations. The only aspects that seems setbound are some of the clearly indoor locations for Grimpen Mire. Douglas Hickox tells the story with good dramatic flow, even if at the end of the day what we get feels like a good and worthwhile version of the Conan Doyle story but never something that is anything more than that.

One of the things that impresses about the film is that Weintraub has mounted it with a sterling cast line-up from the British acting profession of the day, including Ian Richardson, Denholm Elliott, Ronald Lacey, Brian Blessed, Edward Judd, Nicholas Clay, Martin Shaw who was a dashing handsome lead on the basis of the tv series The Professionals (1977-83) as Sir Henry, plus Connie Booth, John Cleese’s former wife, best known for her role on Fawlty Towers (1975-9).

Director Douglas Hickox had previously made the rather funny screen adaptation of Joe Orton’s Entertaining Mr Sloane (1969) and the horror film Theater of Blood (1973) with Vincent Price as a mad Shakespearean actor. Charles Edward Pogue was an American writer who delivered his first screen credit here and subsequently went on to write a number of other films including David Cronenberg’s The Fly (1986), Psycho III (1986), DragonHeart (1996), Kull the Conqueror (1997) and Hercules (tv mini-series, 2005).