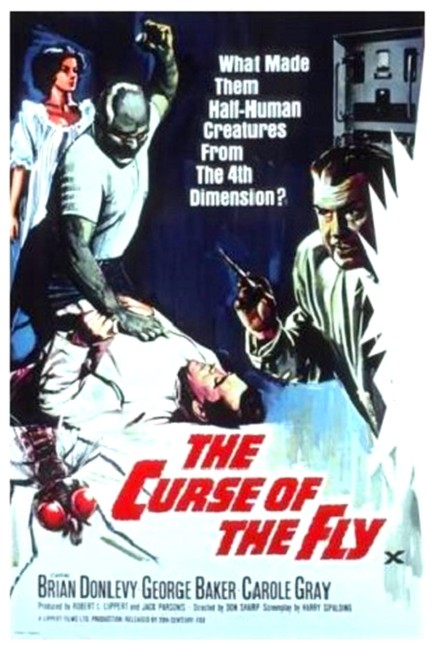 Escaping from the Fournier Mental Hospital, Patricia Stanley is found and granted refuge by Andre Delambre’s grandson Martin. They quickly fall in love with and he proposes to her, unaware of who she is until a police inspector comes searching for her. They return to the Delambre home in Quebec where Martin and his father are conducting teleportation experiments. However, when Patricia discovers the mutated still-living remains of their failed experiments, Martin and his father try to convince her that she is seeing things.

It would be expecting a little too much to have a third Fly film and the Delambre household still failing to realise the necessity of installing fly-screens in their laboratories. And to screenwriter Harry Spalding’s credit, he comes up with a plot that deals with the potential dangers of teleportation systems instead of just repeating the same lab accident and human/fly monster story. However, Lippert Pictures, who purchased the rights to The Fly (1958) from 20th Century Fox, have more exploitative ends in mind and still use the generic Fly series name despite the lack of any species Diptera in the film.

American producer Robert L. Lippert set up operations in the UK and even worked with Hammer Films for a time before they became a big name. Lippert made Curse of the Fly in the UK, hiring director Don Sharp, who was starting to make a name for himself with several Anglo-horror films (see below). Sharp offers up some suitably horrific moments with steaming mutated masses arriving in teleport booths or the moment that Carole Gray finds the mutant remains of George Baker’s former wife playing the piano.

There is an interestingly offbeat opening with Carole Gray escaping from the asylum in her underwear, shot in slow-motion. This scene was enough for David Pirie to claim Curse of the Fly as one of Don Sharp’s minor masterpieces in his essay on Anglo-horror A Heritage of Horror: The English Gothic Cinema 1946-1972 (1973). This tends to overrate the film as the rest of it plods drearily. Nor does the addition of a stodgy, dogged and aging Brian Donlevy (Hammer’s Professor Quatermass) to the cast line-up do much good.

Australian-born director Don Sharp became a regular director within the British horror industry making the likes of Kiss of the Vampire (1962), Witchcraft (1964), the first two of the Christopher Lee Fu Manchu series The Face of Fu Manchu (1965) and The Brides of Fu Manchu (1966), Rasputin The Mad Monk (1966), the period sf comedy Jules Verne’s Rocket to the Moon/Those Fantastic Flying Fools/Blast Off (1967), the psycho-thriller Dark Places (1973), the undead biker film Psychomania (1973) and the lost world film Secrets of the Phantom Caverns/What Waits Below (1984).