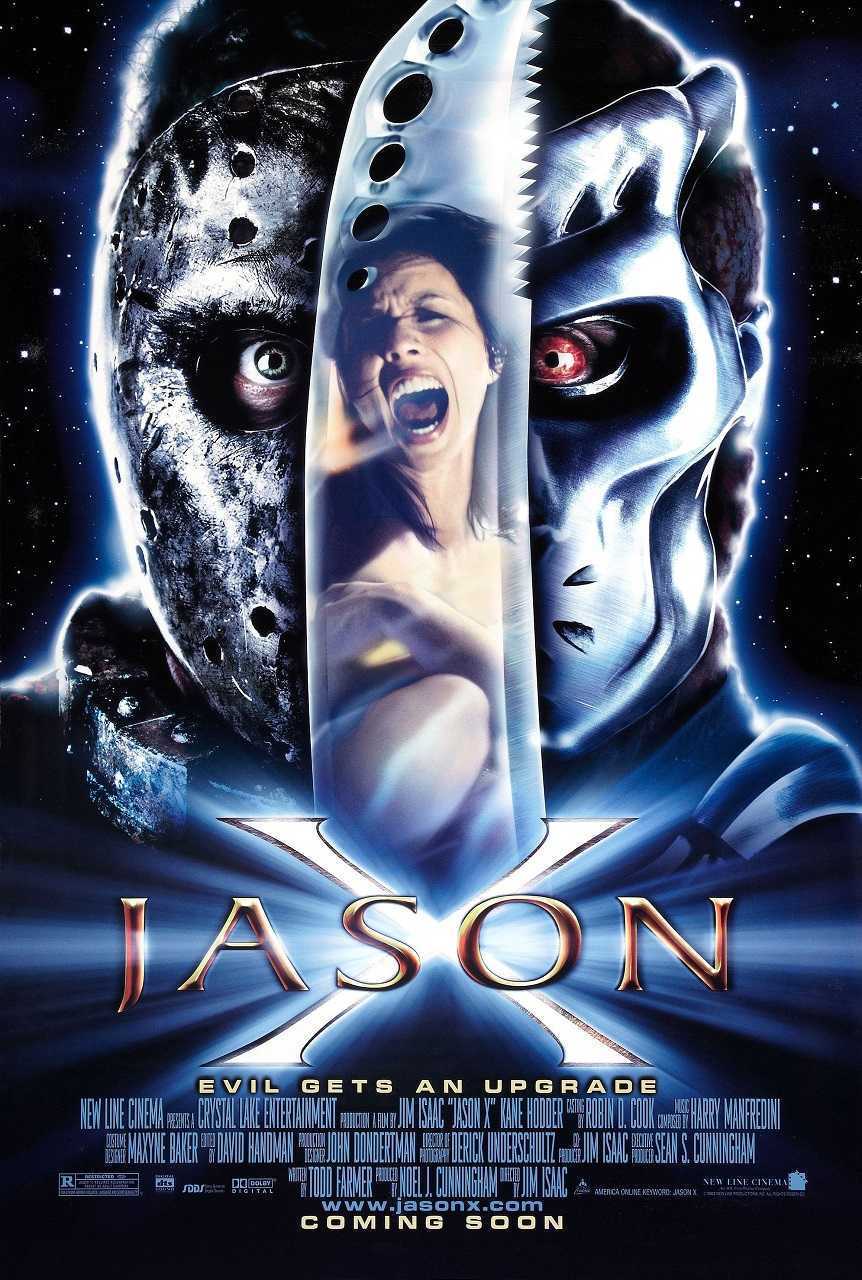 In 2010 at a Camp Crystal research facility, plans are being made to cryogenically freeze Jason Voorhees after all other attempts to kill him have failed. However, Jason breaks free. Scientist Rowan manages to trap Jason inside the cryogenic freezer but is herself trapped and both of them frozen. In the year 2455 in the ruined wasteland of Earth, a team of archaeology students finds their bodies. They are taken aboard the spaceship Grindel where the professor sees the opportunity of exploiting and selling Jason’s body. Revived, Jason now starts slaughtering everybody aboard the ship.

Jason X was the tenth Friday the 13th film. It was the second of the Friday the 13th films produced after New Line Cinema brought the rights to the series. Sean S. Cunningham, director of the original Friday the 13th (1980), is back on board as Executive Producer, while his son Noel produces. In the director’s chair, Cunningham has brought on board Jim Isaac, who previously directed The Horror Show (1989) under Cunningham’s producership and supervised the visual effects on Cunningham’s Deepstar Six (1989).

The New Line Friday the 13th films – the previous entry, Jason Goes to Hell: The Final Friday (1993), this and the subsequent Freddy vs. Jason (2003) – demonstrate much more of a conceptual playfulness than any of the preceding eight Friday the 13th‘s released by Paramount, which seemed little more than a conveyor belt of formulaic hack and slash. Jason Goes to Hell revealed Jason as being inhabited by a mind-controlling parasite, while Jason X takes the series into space. As the Making of section of the DVD shows, the ‘Jason in Space’ concept was one of several variations on the formula that the creative team tossed around – others including ‘Jason at the North Pole’ and ‘Jason in Africa’. Jason X is certainly the best budgeted of the Friday the 13th films, and the one with the best production values and photography.

The film toys with a number of science-fictional ideas – nanotech reconstruction of the human body, an android engaged in a romance with a human, Earth as a future wasteland, Virtual Reality scenarios. The film certainly takes its time leading in – aside from the first scene, it is nearly half-an-hour before the first killing takes place. Not that Jason X neglects the goodies expected of a Friday the 13th film.

The first killing is a strikingly original piece – a camera shot from inside a cryo vat as someone’s head is shoved into the liquid and we see it instantly freeze before Jason smashes their face against a steel bench and shatters it. The scenes in the middle with the military being eliminated by Jason are sustained with some tension that favourably compares to the drawn-out suspense of Aliens (1986). As with modern cinematic moves regarding on-screen nudity, the sex scenes have been tamed down. It is all suggestion – the kissing tease of lips moving down a stomach and easing panties off without anything shown (which certainly casts it with more eroticism than any of the previous films have had). On the whole, Jason X is more promising than almost all of the other Friday the 13th films combined.

On the other hand, the balance topples over in the latter quarter of the film. Some of the teen reactions are a little too knowingly cynical. When Lisa Ryder’s android emerges with her ‘upgrade’ in skintight leather, wielding Big Guns, conducting martial arts moves and delivering cynical one-liners to take on a part-cyborg Jason in a seeming attempt to merge the Friday the 13th series with The Matrix (1999), the effect is just a little too comic-bookish. The New Line Friday the 13th films have often seem wryly reflective and deconstructive. Right at the end, there is a witty scene with a techno geek distracting Jason with a Virtual Reality simulation of a campfire with two half-naked girls who ask in unison “Want some beer? Want to smoke some pot? Or we could have premarital sex? We love premarital sex.” It is a scene that sharply and wittily mocks the underlying subtext of the 1980s Friday the 13th films. The film ends on an amusing reworking of the climax of Dark Star (1974) with soldier Peter Mensah surfing Jason’s body down into the atmosphere.

In one totally cool move, Jim Isaac scores a cameo from David Cronenberg, the cult genre director of films such as Scanners (1981), The Fly (1986) and Dead Ringers (1988), and occasionally actor. Isaac had previously worked with Cronenberg in a special effects capacity on The Fly, Naked Lunch (1991) and eXistenZ (1999) and the film was shot on Cronenberg’s home turf Toronto. Cronenberg turns up in the first scene as a supercilious doctor who wants to take Jason away and gets skewered with a metal rod for his troubles.