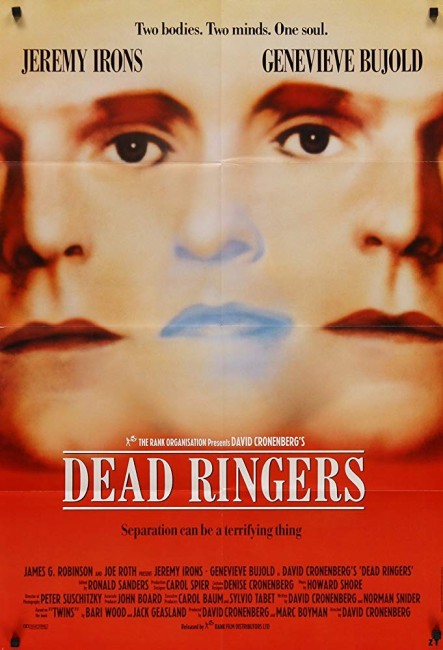 The Mantle twins, reserved, withdrawn Beverly and the smart and handsome Elliott, run a gynaecological clinic in Toronto, which caters to their peculiar obsessions with female reproductive organs. The two enter into a relationship with actress Claire Niveau, she not realising that she is bedding the two of them who are swapping about and pretending to be one person. When Beverly falls in love with Claire, this creates a rift between he and Elliott that serves to drive the two of them down into sexual obsession and drug addiction.

This compulsive venture into the psychological territory of the strange relationship between twins is the most stunning and disturbed vision from the fertile imagination of David Cronenberg yet. In a career filled with great films (see below for other titles), Dead Ringers stands as David Cronenberg’s singular masterpiece.

Prior to Dead Ringers, movie twins had been dominated by the cliches of good twin vs bad twin – see the likes of the Boris Karloff The Black Room (1935), Among the Living (1941), The Dark Mirror (1946) and Dead Ringer (1964), the Bette Davis starrer of the same name. (Incidentally, Dead Ringers was originally announced under the title Twins, but the title was snapped up first by David Cronenberg’s former producer Ivan Reitman’s Twins (1988) released earlier the same year, which explored the theme’s comic potential. Cronenberg claims that Reitman paid him money so that he could be the one who used the title). David Cronenberg sets these cliches aside – there is no such polarity as good twin/bad twin here – to make a compulsively fascinating and creepy meditation on sexual fetishism and the questions of identity among twins. The story was loosely based on a real incident that occurred in 1975 when twin doctors Steven and Cyril Marcus were found dead of a drug overdose in their Manhattan apartment.

David Cronenberg is a director whose films seem to erupt with repressions forced by the divide between body and mind. Flesh in Cronenberg’s films is imbued with an independent mind and will of its own – the sexual fetish-creating parasites of Shivers (1975); the repressions literally made manifest in flesh in The Brood (1979); human bodies turned into reprogrammable vcr’s in Videodrome (1983); the scientist fascinatedly watching the process of his own mutation in The Fly (1986). There are no such things as mad scientists in David Cronenberg’s films – while their sanity may be in dubious regard, this is a distinction that serves no purpose. Rather than rail at the outrage of science amok as mad scientist films once did, Cronenberg’s scientists watch the process of science gone amok and their own disintegration with detached curiosity, even willingly surrender to the process.

All of David Cronenberg’s films up until Dead Ringers can be viewed as falling within standard sf/horror/monster movie themes – parasites, surgical experiments, radical psychiatric treatments, psi powers, mutation and the like. Dead Ringers is a demarcation line within David Cronenberg’s work where he started to move away from any easy genre pigeonholing.

Many of Cronenberg’s subsequent films – this, Naked Lunch (1991) and Crash (1996) – are what might be described as science-fiction films that chart inner rather than outer space. Naked Lunch takes place inside a densely laden (and frequently incomprehensible) series of metaphors where the whole film seems to be taking place inside psychological headspace (it could be Videodrome without the need for devices like reality-altering vcrs), while in Crash people are engaged in outwardly non-fantastic but behaviourally perverse actions (trying to sexually merge with auto-accidents) whose meanings seem to follow an internal map of science-fictional processes.

Dead Ringers is a science-fiction film that takes place more as metaphor than it does literally – like when the twins talk of being “two bodies with a single nervous system” and of synchronising their bloodstreams in order to cure the other of drug addiction, culminating in the disturbing climax where Beverly tries to physically sever the link; of Beverly’s creepy claim “the patients we’ve been having lately – they’re normal on the outside, but not on the inside,” and then producing a set of gleaming chromium surgical instruments shaped like fossils, which he introduces as ‘gynaecological instruments for mutant women’. If any of this had been given literal expression, Dead Ringers would have been a totally wild sf/horror film, but instead Cronenberg pushes it back to where it is only imagery being expressed by disturbed minds.

In David Cronenberg’s meditations on themes of divided bodies and mind, the twins become a metaphor for dual and separate identities seemingly inhabiting at times a single – or at least perceived by others to be one – bodyspace. Cronenberg has fun, pushing the film into the most perverse places he possibly can. He seems fascinated by the bizarre sexual possibilities twinship offers. “You know, you never experience anything until I do,” the Machiavellian Elliott sinisterly tells the downtrodden Beverly. There is a whacked-out dream sequence where Genevieve Bujold bites in two a phallic-looking conjoined navel-link between the two of them.

Cronenberg fetishises gynaecological medicine – “I’ve always thought there should be beauty contests for the inside of the human body,” Jeremy Irons says at one point and, in some of the dryer-than-dry humour that pops up in Cronenberg’s films and most people usually don’t get, launches off into a speech about contests for best spleen and best female sexual organs. (Dead Ringers is a film that polarises audiences along sexual lines – guys like it, it makes women feel uncomfortable at the way their insides are being viewed).

Equally, Cronenberg medicalises sex – in one scene, we see Jeremy Irons having sex with Genevieve Bujold who is dressed in a calico surgical smock and tied to the bed with surgical tubing. In the film’s wildest scene, the withdrawing Beverly produces the mutant instruments in an operating room, where the medics all stand in strange full-length red gowns more like they are attending an occult ceremony than an operation, and starts tearing open the insides of a patient with them, then jumps across her to suck on the anaesthetic gas.

The film contains one (or at least two) brilliant performance(s) from England’s Jeremy Irons. The duo of performances as the Mantle twins is the best work that Jeremy Irons has ever done in a career filled with award-winning performances. The delineation between the two personalities and the incredibly subtle shadings of character that each are etched with make this a performance of a lifetime. He is aided considerably by the flawless optical work that allows the two Irons’s to integrate together, converse and move about.

Jeremy Irons was almost criminally overlooked by the major awards that year, being overshadowed everywhere by Dustin Hoffman’s substantially less interesting performance in the bland Rain Man (1988). The only award to recognise Jeremy Irons was The New York Film Critics, while the LA Film Critics nominated Genevieve Bujold for Best Supporting Actress but insultingly not Irons. Quebecois actress Genevieve Bujold is great too – after being stuck in a number of blandly neurotic performances for most of the preceding decade, her worldwise and tough yet wonderfully pixyish character emerges as especially good.

David Cronenberg’s other films are:– Stereo (1969), a little-seen film about psychic powers experiments; Crimes of the Future (1970) set a future where people have become sterile and developed strange mutations; Shivers/They Came from Within (1975) about sexual fetish inducing parasites; Rabid (1977) about a vampiric skin graft; The Brood (1979) about experimental psycho-therapies; Fast Company (1979), a non-genre film about car racing; Scanners (1981), a film about psychic powers; Videodrome (1983) about reality-manipulating tv; The Dead Zone (1983), his adaptation of the Stephen King novel about precognition; The Fly (1986), his remake of the 1950s film; Naked Lunch (1991), his surreal adaptation of William S. Burroughs’ drug-hazed counter-culture novel; M. Butterfly (1993), a non-genre film about a Chinese spy who posed as a woman to seduce a British diplomat; Crash (1996), Cronenberg’s adaptation of J.G. Ballard’s novel about the eroticism of car crashes; eXistenZ (1999), a disappointing film about Virtual Reality; Spider (2002), a subjective film takes place inside the mind of a mentally ill man; the thriller A History of Violence (2005) about an assassin hiding from his past life; Eastern Promises (2007) about the Russian Mafia; A Dangerous Method (2011) about the early years of psychotherapy; Cosmopolis (2012), a surreal vision of near-future economic collapse; and the dark Hollywood film Maps to the Stars (2014). Cronenberg has also made acting appearances in other people films including as a serial killer psychologist in Clive Barker’s Nightbreed (1990); a hitman in Gus Van Sant’s To Die For (1995); a Mafia head in Blood & Donuts (1995); a member of a hospital board of governors in the medical thriller Extreme Measures (1996); as a gas company exec in Don McKellar’s excellent end of the world drama Last Night (1998); and a priest in the serial killer thriller Resurrection (1999); and a victim in the Friday the 13th film Jason X (2001).