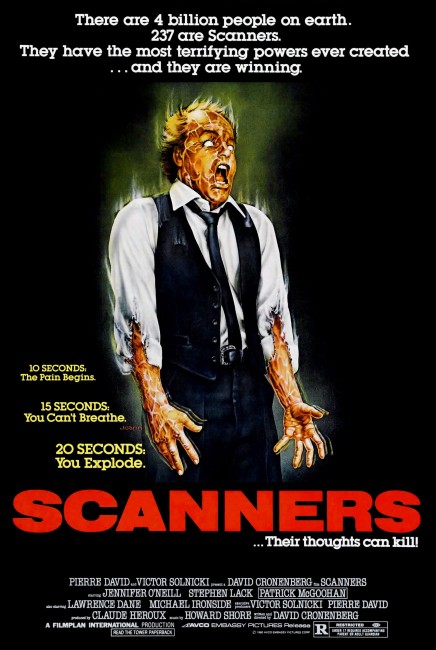 Cameron Vale is found living homeless on the streets and is taken by a secret agency. There, under the tutelage of Dr Paul Ruth, he learns that he is a ‘scanner’ – one of a rare breed of mutants with psychic powers. He is then trained in the use of his powers in order to infiltrate the scanner underground created by the megalomaniacal Daryl Revok.

Canada’s cult director David Cronenberg first appeared with a couple of little-seen experimental genre films – Stereo (1969) (which prefigures many of the ideas in Scanners) and Crimes of the Future (1970). Cronenberg then moved toward more traditional genre horror and found acclaim with two inventive B movies, Shivers/They Came from Within/The Parasite Murders (1975) and Rabid (1977). The success of these gave David Cronenberg the ability make films with much better budgets – and in the zone of the B+ horror film, he made the excellent The Brood (1979) and Scanners, before going onto even greater things. (See below for a full listing of David Cronenberg’s films).

Of David Cronenberg’s earlier films, Scanners is the most outright fun. It is not that David Cronenberg is making a popcorn film by any means. His regular themes of the battleground between body and mind are still very much at the forefront of Scanners. Previous films on the subject of psi powers such as The Power (1968) and The Fury (1978) had emerged as respectively dull and sprawlingly muddled. (There was Brian De Palma’s excellent Carrie (1976) but that was intended more as a horror film than as science-fiction). For greater detail see Films About Psychic Powers.

By contrast, David Cronenberg construes Scanners as an amazing series of cerebral and effects set-pieces. This is literally a film about Cronenberg’s idea of ‘The Shape of Rage’, with thoughts and expressions literally making themselves manifest – in one eerie image, Robert Silverman turns up as a tormented scanner sculptor whose only peace comes in huddling in a womb-like cocoon built as a giant-size replica of a human head. In an eerie prefigural of one of the vivid metaphors that run through Cronenberg’s Dead Ringers (1988), there is a scene where the hero synchronises his body and heartbeat with that of a yogi.

In another amazing sequence, Cronenberg has hero Stephen Lack scan his way into a computer system via the phone lines to obtain information. What is intriguing is that this is a scene that was created before the conception of the internet and the term hacker. Nowadays of course, the notion of Stephen Lack’s hack-in seems slightly absurd – the similarity of human nervous systems and computers can only be purely a metaphorical analogy, not a literal one as Scanners has it – but the image is nevertheless a remarkable one.

The effects team have a field day – there is an amazing climactic duel where Stephen Lack and Michael Ironside fight it out, causing either’s veins to swell, skin pop and explode into flame. The set-piece that became the talking point of the film (and routinely worked to death by the sequels) comes early on where Michael Ironside infiltrates a scanner demonstration and allows himself to be scanned by Louis Del Grande, only to scan him back and cause his head to literally explode.

Some genre purveyors have picked on the fact that David Cronenberg was still completing the script for Scanners during shooting but this is rarely evident in the finished film unless one knows otherwise. Maybe one can point to the enigmatic ending as perhaps being evident of not knowing how to end the film. Certainly, Cronenberg’s subsequent film, Videodrome (1983), is considerably more incoherent than Scanners is.

One of Scanners‘s major liabilities is lead actor Stephen Lack. David Cronenberg apparently cast him because of his piercing blue eyes but Stephen Lack is utterly wooden and almost entirely absent as a personality on screen. On the other hand, Cronenberg does surround Lack by other excellent performances. Patrick McGoohan gives an outstanding, ambiguously shaded performance – one that was the finest of his career.

Scanners also brought to attention Canadian actor Michael Ironside who would go onto a career specialising in similar cold and brutal, tight-lipped villain roles – he can also be seen in the genre likes of Visiting Hours (1982), Watchers (1988), Total Recall (1990) and Highlander II: The Quickening (1991), among numerous others.

There were four sequels made to Scanners: – Scanners II: The New Order (1991), Scanners III: The Takeover (1992), Scanner Cop (1994) and Scanner Cop II: Volkin’s Revenge (1995). All are dull and dominated by head-popping effects and contain none of David Cronenberg’s cerebral play of ideas. Neither Cronenberg or any of the people from this film have been involved with any of the sequels.

David Cronenberg’s other films are:– Stereo (1969), a little-seen film about psychic powers experiments; Crimes of the Future (1970), a film about a future where the populace is overrun by bizarre fetishes; Shivers/They Came from Within (1975) about sexual fetish inducing parasites; Rabid (1977) about a vampiric skin graft; The Brood (1979) about experimental psycho-therapies; Fast Company (1979), a non-genre film about car racing; Videodrome (1983), a masterpiece about reality-manipulating tv; The Dead Zone (1983), his adaptation of the Stephen King novel about precognition; The Fly (1986), his remake of the 1950s film; Dead Ringers (1988) about disturbed twin gynaecologists; Naked Lunch (1991), his surreal adaptation of William S. Burroughs’ drug-hazed counter-culture novel; M. Butterfly (1993), a non-genre film about a Chinese spy who posed as a woman to seduce a British diplomat; Crash (1996), an adaptation of J.G. Ballard’s novel about the eroticism of car crashes; eXistenZ (1999) about Virtual Reality; Spider (2002), a subjective film takes place inside the mind of a mentally ill man; the thriller A History of Violence (2005) about a hitman hiding in an assumed identity; Eastern Promises (2007) about the Russian Mafia; A Dangerous Method (2011) about the early years of psychology; Cosmopolis (2012), a surreal vision of near-future economic collapse; and the dark Hollywood film Maps to the Stars (2014). Cronenberg has also made acting appearances in other people films including as a serial killer psychologist in Clive Barker’s Nightbreed (1990); a Mafia hitman in To Die For (1995); a Mafia head in Blood & Donuts (1995); a member of a hospital board of governors in the medical thriller Extreme Measures (1996); as a gas company exec in Don McKellar’s excellent end of the world drama Last Night (1998); as a priest in the serial killer thriller Resurrection (1999); and as a victim in the Friday the 13th film Jason X (2001).