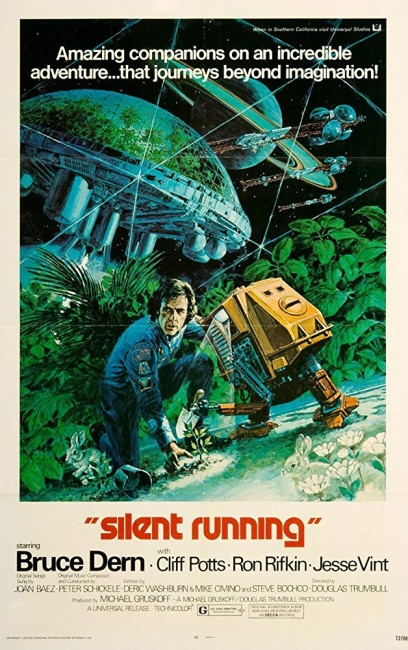 All the forests on Earth have died and the remaining ones have been placed in domes on three ships in orbit around Saturn. The order then comes through for the crews to destroy the forests and return to Earth. However, crewman Freeman Lowell, who lovingly tends the plants aboard the Valley Forge, cannot bear to do so. Instead, he kills his insensitive fellow crewmen and takes the ship out of orbit in order to protect the single remaining forest.

Silent Running is considered a genre classic. It was never a huge success when it was initially released but has garnered a well-liked reputation among science-fiction fans subsequently. It seems made as a clear crosscut of the twin influences of the embryonic 1970s environmentalist movement and the success of 2001: A Space Odyssey (1968). The influence of 2001 is particularly evident in the recruitment as director of Douglas Trumbull who had supervised the special effects for the journey through the stargate in 2001. Like 2001, the film is set within the gas giant reaches of the Solar System, while it also makes a stab in the direction of hard science space opera and even throws in a more modest variation on the 2001 light show during the traversal of Saturn’s rings.

Expectedly with Douglas Trumbull in the director’s seat, the special effects work is exceptional. The models are superbly detailed and Trumbull sets up beautiful shots of the forests outlined against the rings of Saturn in their geodesic domes or of the robots crawling down the enormous length of the outside of the ship. The robots are adorably cute. Here Trumbull cast a group of paraplegics and placed them inside robot bodies to achieve one of the few credible portraits of non-humaniform robots seen on screen up to that point. The film was shot on a medium budget – only $1.3 million (in contrast to 2001, which cost some $11 million at the time). Trumbull achieved a great deal of cut-price realism by shooting inside the interior of an abandoned aircraft carrier (the real Valley Forge), which is something that grants the film a good deal of authenticity.

The film comes with a heavy ecological message – even down to Joan Baez on the soundtrack sustaining every note she sings on a wail. It is rather ludicrously Green-slanted – Bruce Dern is the good guy celestial gardener, pointedly called Freeman (ie. free-man). He dresses in monk’s robes and eats natural instead of processed food. Trumbull’s camera focuses on images of owls flying, Dern in his white robes planting trees and closeups of his conservation banners and pledges. The only other people we see in the film are portrayed as insensitive jerks that are indifferent to the beauty of nature. All of this taps into vague sentimental notions such as ‘real taste’, ‘real smell’ and the presumption of the superiority of natural beauty. Silent Running is in some ways the mirror image of 2001 and other films of the same era such as The Andromeda Strain (1971) and THX 1138 (1971) that saw humanity’s future as dominated by a clean, white antisceptic perfectionism and technotopia triumphant; Silent Running doesn’t feature the same look but echoes the other side of the same themes by saying that the future is one where natural beauty and the environment are endangered.

Outside of its status as a fan favourite though, Silent Running is a rather loopy film. Other than Douglas Trumbull’s quality effects, there is not much besides Bruce Dern, slyly playing to the audience, and the cutely anthropomorphised robots to enliven the film. There is no real drive to the plot. The science contains a number of glaring blunders – one might forgive Saturn’s rings being made of light in order for a 2001-styled light fantastic trip, in that nobody in the astronomical world was certain what they were made of up until the Voyager flyby in the 1980s. There are also all the usual shock waves and sound in space. One of the more amusing scenes, watching the film over twenty years later, is seeing the way that Bruce Dern reprograms the robots – instead of altering the code in the programming, he gets out a microscope and soldering iron and physically rewires the integrated circuit.

Moreover, the film is vague about credibly establishing why all the forests were uprooted and placed in orbit around Saturn. It strains plausibility in a big way to say that nobody would care about such. Trying to say that forests jettisoned in space would be a navigational hazard is akin to calling one log in an ocean a hazard to shipping. For that matter, why have the forests been placed in orbit around Saturn, what is wrong with Earth or Lunar orbit? As the film does vaguely acknowledge toward the end, the forests would have more than a few problems getting enough sunlight – Saturn is not a frozen ball of ice without a reason. Not to mention that Earth without any forests might have more than just a few problems in still sustaining oxygen-breathing life. For that matter, the title Silent Running is a meaningless one – the film’s lack of commercial prospect at the time could well have had something to with the fact that audiences might have mistaken the title for a WWII submarine drama instead of a science-fiction film.

Subsequent to Silent Running, Douglas Trumbull failed to get some of his other planned directorial projects off the ground, which included the script that later became Millennium (1989), and returned to special effects, delivering sterling work on films such as Star Trek – The Motion Picture (1979) and Blade Runner (1982). Trumbull peaked again when he provided the amazing UFO light effects for Steven Spielberg’s Close Encounters of the Third Kind (1977). As a result of his work there, Trumbull’s name was almost hailed with as much prominence as Spielberg’s by some genre magazines at the time.

As 2001 had, the success of Close Encounters allowed Trumbull to resume the director’s chair again with the ambitious but deeply troubled Brainstorm (1983), one of the earliest films to deal with Virtual Reality. Trumbull conceived this as a project to develop his interest in 70mm, high-definition filmmaking. Since Brainstorm, Trumbull devoted his time to making 70mm specialty shorts in a process he called Showscan. It was his intent to open a series of specialty theatres in the Showscan process but Trumbull’s plans went under, only to be co-opted a few years later by the IMAX process. (In fact, Trumbull later became the vice chairman of IMAX). His 70 mm short films include New Magic (1983), Big Ball (1983), Let’s Go (1985), Leonardo’s Dream (1989) and To Dream of Roses (1990). Since Showscan, Trumbull has concentrated on building amusement park rides, his most notable success being the Universal Studios Back to the Future ride, which opened in 1991. Trumbull also produced The Man Who Killed Hitler and Then The Bigfoot (2018)..

There are a fascinating number of other names on the credits. The script is co-written by Michael Cimino, later the Award-winning director of The Deer Hunter (1978), the infamously over-budgeted but actually quite good Heaven’s Gate (1980) folly and the great The Year of the Dragon (1986). Cimino co-writes with a young Steven Bochco, later multiple award-winning creator of the likes of tv’s Hill St Blues (1981-7), L.A. Law (1986-94), NYPD Blue (1993-2005) and Murder One (1995-7), among others. Bochco’s only other venture into genre material was as writer of the unsold tv pilot Vampire (1979).