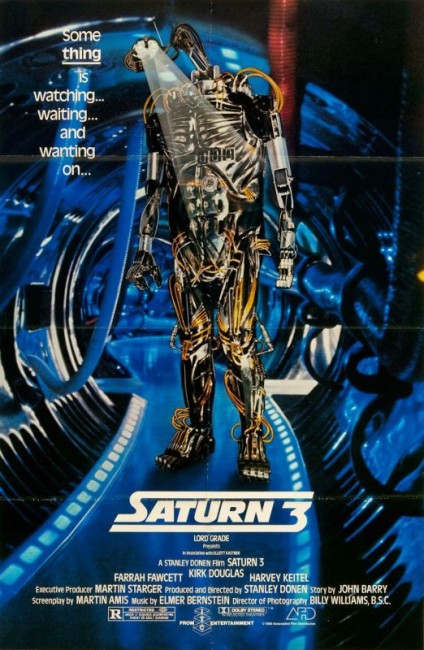 Benson, a space pilot who has been refused for duty because he is mentally unstable, kills another pilot and poses as him to take over his mission. He flies down to a remote hydroponic station on Saturn’s moon Triton that is maintained by two reclusive lovers Adam and Alex. There Benson constructs Hector, a robot that is connected to his brain by a computer link. However, when Benson activates the robot, he is unable to stop it from becoming polluted by his own madness.

Saturn 3 was an A-budget production that emerged in the late 1970s/early 1980s science-fiction boom. It was conceived and originally to be directed by John Barry (not to be confused with John Barry the composer known for his work on the James Bond films). This Barry was a celebrated production designer known for his exemplary work on films such as A Clockwork Orange (1971), Star Wars (1977) and Superman (1978). Barry would have made his directorial debut on Saturn 3 but was removed only a few days shooting over ‘creative differences’. The film’s producer, the renowned director Stanley Donen, for whom Barry had designed several films and had been instrumental in encouraging Barry to develop the film and who had taken the project to ITC head Sir Lew Grade, quickly stepped in to fill his place.

Stanley Donen was previously known for his musicals and light frothy romantic comedies, including the likes of Singin’ in the Rain (1952), Funny Face (1957), Charade (1963), Arabesque (1966) and Lucky Lady (1975). Donen had previously ventured into the fantasy genre with the musical versions of Damn Yankees (1958) and The Little Prince (1974), as well as the black comedy Bedazzled (1967), but Saturn 3 was his first and only venture into science-fiction. Sadly, four moths after he was fired, Barry died of meningitis, aged only 43.

Saturn 3 was almost universally excoriated upon its release; somewhat to the contrary, one finds it almost interesting, even if it is ultimately a script that suffers from too many pretensions. Saturn 3 came out not long after the huge success of Alien (1979) and gives the impression of trying to be another Alien, substituting a giant cyclopean robot prowling the space station corridors for an alien nasty. That could well be the case, but for the fact that Saturn 3 was planned well before Alien was ever released.

As such, the film appears more like an version of Frankenstein (1931) transplanted into an outer space setting and run over with some odd allusions to the Garden of Eden – Kirk Douglas (whose character is even named Adam) and Farrah Fawcett as lovers who live in an innocent garden paradise, Harvey Keitel as the serpent who enters paradise and whose lusts end up polluting its idyll.

The plot lacks a certain momentum but Stanley Donen builds it well during the latter half with some decent scenes of the robot pursuing people through the complex. However, it all becomes confused by the end. There is an abrupt and downbeat ending with Farrah Fawcett just deciding the return to Earth – throughout Earth is used as a symbol of decadence and one supposes her return acts as a symbol of surrender to loss of innocence, but as an ending it comes as a decided anticlimax. Nevertheless, there are some oddly intriguing lines littered throughout that effectively sketch a picture of life back on Earth. Harvey Keitel approaches Farrah Fawcett:

“You have a beautiful body. May I have the use of it?”
“I’m with the Major.”
“For his personal use only?”
“Yes.”
“That’s penally unsociable on Earth.”

Later she asks him “Have you ever had a pet?”, which receives the reply “I’ve had dog a few times. Something to eat.”

Saturn 3 was made on a then fair $10 million budget. The whole of the budget appears to have been spent on the sets, which are highly imaginative – although in a determination to avoid the dirty downbeat look that became all the science-fiction vogue after Star Wars and Alien there at times the design seems more extravagant than practical. The station has clearly been built around an entire soundstage and gives the impression of a full complex that doesn’t just end at the camera’s edge. The robot Hector looks impressively convincing and well designed.

The special effects vary somewhat. The opening sequence with the camera flying past Saturn and the station, the hangar full of black-suited figures and Harvey Keitel killing his comrade by opening an airlock door and splattering his body, and then taking off in the shuttle and circling Saturn’s rocky rings and landing on the moon, is impressive. Although the mattes and opticals here fail to always convince. Moreover, it is a sequence that seems designed more for effect than sensibility – why do some people on the station walk on the ceiling and others at different angles (gravity on space stations works as centrifugal force)? Why would a pilot fly through the rock-packed rings, which would be a navigational nightmare, rather than around them?

Kirk Douglas and Farrah Fawcett never do much to stand out in their roles, although there is a performance of strangely appealing physical menace from Harvey Keitel, who was then a relative unknown and not the major name he is today. Farrah Fawcett was then riding at the peak of her success and regarded as the bombshell of the 1970s as a result of appearing in a single season of Charlie’s Angels (1977-81) and then becoming a poster pin-up sensation. She was widely pilloried for her phenomenal lack of acting talent, something that is clearly on display here. In the 1980s, Farrah proved her critics wrong and returned to strength as an actress taking on a number of strong roles of decidedly feminist bent in the likes of the tv mini-series The Burning Bed (1984) and the film Extremities (1986), even the title role in the tv movie biopic Margaret Bourke-White (1989).

The film had a script by the celebrated British novelist Martin Amis whose works have been multiply filmed – see London Fields (2018) for his one other genre work. Amis later wrote a fictionalised book about the experience with Money (1984).