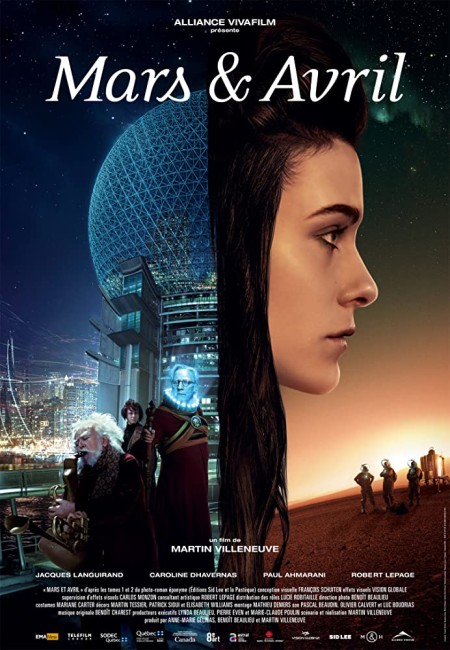 Montreal of the future, just as humanity has launched a three-man expedition to land on Mars. 75 year-old Jacob Obus has fame as a musician using unusual custom-built instruments. His designer is Arthur Spaak who models the instruments he builds on the female form. At one performance, Arthur meets and is attracted to the photographer Avril. She in turn is attracted to Jacob and pushes past his refusal to meet fans and insists on going for a drink with him. As they become involved, Jacob is forced to confess that, despite being desired by many women, he has never slept with one. However, after sleeping with Avril, he finds that he is unable to perform on stage. This love triangle interweaves in strange ways, especially when Avril is inexplicably teleported to Mars and Jacob uncovers a strange relationship between the planet and his music.

Mars et Avril (which translates as Mars and April, although the French-language title seems to be being used far more commonly in promotion than the English-language one) is a Canadian film, shot in Montreal in the French language. It is a directing-writing debut for Martin Villeneuve, a former advertising director who gained some acclaim for the videos campaigns he directed for the Cirque du Soleil. (His brother Dennis Villeneuve is also a director of some acclaim, having made SF films like Arrival (2016) and Blade Runner 2049 (2017) and a host of other acclaimed works).

Martin Villeneuve has also written several graphic novels and Mars et Avril originally appeared as two of these, Mars and April (2002) and Mars and April: In Pursuit of Fantasy (2006) where the comic-book panels were shot as photographic stills (many of the models from these play the same parts in the film). The graphic novels were originally optioned by Quebecois director Robert LePage, who has made films such as The Confessional (1994), The Polygraph (1996) and two quasi-science fiction works Possible Worlds (2000) and The Far Side of the Moon (2003). LePage eventually turned the property back over to Villeneuve, although agreed to play the role of the man with the hologram head (so construed because LePages was unavailable during shooting and his scenes had to be shot elsewhere and digitally inserted).

I was immediately impressed with Mars et Avril from its opening scene that employs some dazzling visual effects to conduct a tour of the Solar System and give illustration to Johannes Kepler’s notion of the Music of the Spheres. A film that quotes a 17th Century astronomer to create a complex metaphor is immediately standing heads and shoulders above most other science-fiction films out there by dint of demonstrating that it has actually capable of reading up on history rather than recycling other movies. The film then segues into a vision of the future. Here Martin Villeneuve has employed Belgian comic-book artist Francois Schuiten as his designer and creates a world of dazzlingly unusual futuristic architecture, costuming and cityscapes. Some of the visual effects shots of Mars from space or the spaceship in transit are breathtaking.

On the other hand, it is after this point that the plot kicks in – and what a disappointment that Mars et Avril turns out to be. It feels as though Martin Villeneuve has been inhaling too much of the French New Wave of the 1960s and 70s. Much of the film seems to founder not so much around the romantic triangle but characters constantly philosophically contemplating the idea of it. This is a film where a doctor (Jean Marchand) can offer up a medical diagnosis such as that “two souls need to be combined” or where photographer Caroline Dhavernas can require that her subjects spend several minutes posing for a still photograph so that the photo can capture the “truth of their soul.” At one point, Robert LePages scientist gives a lecture where he states the view that Mars exists far more as something imagined in our heads and that the space expedition are likely to find nothing there when they arrive. (Shades of the French cultural theorist Jean Baudrillard!). Villeneuve makes editing cuts between the curves and contours of a naked human body and the desolate deserts sands of Mars.

This in itself would not be so bad – merely yet another science-fiction that wanders off into the pretensions typical of French cinema. However, Mars et Avril steadily dives off into total incomprehensibility. After traipsing through a romantic triangle where the characters seem to spend more time thinking about what it means than actually creating any sparks of attraction, we get some frankly baffling twists. For reasons entirely unclear, Caroline Dhavernas is teleported to Mars and joins the Marsonauts (where she appears not to need a spacesuit to walk on the planet’s surface). In a subsequent scene, we learn that the entire Mars expedition is being faked in a tv studio a la Capricorn One (1978) – although this would appear not to be the case at later points in the film. After a crisis of performance anxiety, the aging Jacques Languirand is told by his doctor that he has the ability to transport himself to Mars mentally.

At the climax of the film, Languirand, Caroline Dhavernas and Paul Ahmarani appear inside a large vessel that appears to be travelling through space and make the realisation that they are actually inside one of his custom musical instruments. As they stand physically watching the sound rush down the giant vent of the instrument into the void, Languirand claims that they are at the point in space “where sound waves are lost in infinity” (apparently unaware of the fact that sound waves do not travel through the vacuum of space – something that most people learn in high school science). Languirand dies inside the instrument after using the teleport cubicle to send the others back to Earth, where the exhaust point is revealed to be a caldera on Mars. Back on Earth, news broadcasters detect music emanating from the planets (they too seeming not to know that sound does not travel in a vacuum) and note it is Languirand’s last symphony.

I can honestly say it has been a long time since I have watched a film that is so woolly-headed and downright nonsensical. In fact, what we have seems to be more a work that in its blatant dismissal of basic science exists more as pure fantasy than science-fiction. Johannes Keppler’s ideas about the music of the spheres in Harmonices Mundi (1619) came at a time when there was no distinction between astrology and astronomy, where Keppler was trying to build on the works of earlier astrologers and alchemists who claimed that all of creation existed in an harmonic alignment. To Keppler, the idea of the ‘music of the spheres’ was a purely metaphorical one where he was making analogy between the planets in symphonic harmony and the mathematical patterns of their orbits. (The earlier astrologers came up with the idea before it was known that space was a vacuum – thus did not transmit physical waves – or that gravity was a force and it was believed that the planets all moved in terms of inner vibrations, although none of these ever claimed that the planets literally made music).

Martin Villeneuve sadly seems to be someone who is incapable of distinguishing between a metaphor and the literal use of a term – the equivalent might be someone describing lovemaking as a symphony and Villeneuve expecting the body to produce an orchestra next time he has sex. It is sad when so much in terms of design and effects creativity has been lavished on a work that is pure nonsense conceptually.