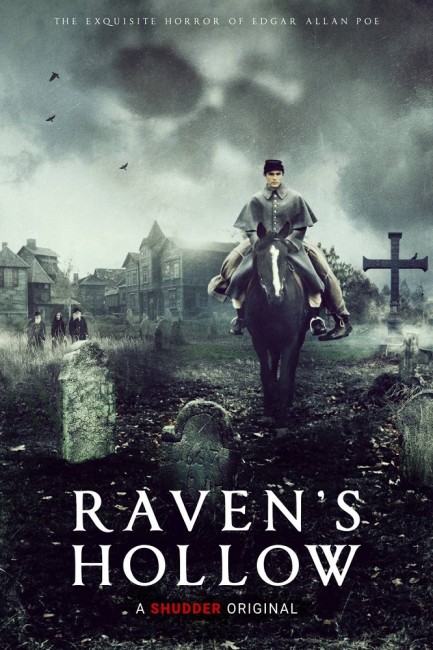 The 1830s. Edgar Allan Poe and four other cadets at West Point military academy are on a training mission in the wild when they come across a body that has been crucified in a lattice of tree branches. The man says the word “raven” before he expires. Poe insists they carry the body to the nearby community of Raven’s Hollow. The locals deny knowing the man but agree to bury him. The cadets spend the night but in the morning one of their number has gone missing. Poe determines to stay and search for his missing colleague. There he comes to learn of the shapechanging entity known only as The Raven that is killing others among the group.

Raven’s Hollow comes from director/writer Christopher Hatton who had previously directed and written the non-genre Sammyville (1999) and the sf/horror films Robotropolis (2011) and Battle of the Damned (2013). Hatton has also written scripts for Cyber Wars (2004) and The Adventures of Peanut and Pig (2022), while two of his earliest jobs were story on episodes of Star Trek: The Next Generation (1987-94).

Edgar Allan Poe (1809-49) is a writer who casts a vast shadow over American horror fiction. The film sets itself around Poe’s time as a cadet at West Point. A 21 year-old Poe entered West Point in March 1830 and was expelled seven months later. Reading up on this, you get the impression that Poe really, really hated his time there. Poe was struggling to make it as a writer but was forced to accept military service. Poe’s much-disliked foster father John Allan used his influence to have Poe placed in the prestigious West Point military academy. Although a good pupil, Poe came to hate the harsh discipline but could not quit without Allan’s permission. His only recourse was to get himself kicked out. The only way to do so was get himself court-martialled, which he did by refusing to turn up to class. He racked up 44 offenses and 106 demerits before being summoned for dismissal.

Raven’s Hollow is an example of Real-Life People in Fiction. Now there is horror writer called Edgar Allan Poe but when it comes to the film, it feels as though it concerns an entirely different character coincidentally also named Edgar Allan Poe. The historical figure and the character on screen have almost nothing in common beyond a name and an erstwhile military career. Poe hated his time at West Point and made every effort to get himself kicked out. By contrast, the film has Poe as a decent and morally upstanding cadet who lectures the other men on their duty. The film’s Poe fights fearlessly for what is right, whereas you get the impression the real Poe would have slunk off the moment things started going sideways. Indeed, the film has the gall to suggest that the real reason that Poe was kicked out of West Point was him being scapegoated in a cover-up about the events.

The role of Poe also is cast with British actor William Moseley, who was once Peter Pevensie in The Chronicles of Narnia: The Lon, The Witch and the Wardrobe (2005) and sequels. Alas, Moseley seems the physical opposite of Poe. He seems well-toned, confidant and assured and has clearly worked out, whereas the photos of Poe that survive show someone who is spindly and frail of build with a head that seems oversized for his body. Other than the vague attempts to connect up to the Poe familiar to us, who we see writing in the epilogue, there seems almost nothing here that resembles the real-life Poe.

Beyond that, there are a couple of Poe character namedrops – an Usher and a Lenore, neither of whom bare the slightest resemblance to their fictional counterparts. The script is centred a shapechanging entity called The Raven and at the end we see Poe sit down to compose his famous poem The Raven (1845). There is the quoting of a single line from the poem about “night’s plutonian shores” but you get the impression that neither of the writers have even read Poe’s poem, which is freely available online at the Poetry Foundation. The poem contains nothing about shapechanging demons and is instead about a maddened narrator who believes a raven that comes to sit on a bust in his room is an augury that can tell what happened to his late love Lenore, only for the raven to say nothing other than “nevermore”. Indeed, demonic and monstrous beings are something that never feature in Poe’s works, rather they are stories where the monsters are internal ones of madness, guilt and the ghosts of the past.

The film is lots of brooding mood – location shooting in Latvia. But it is also CGI-tweaked Gothic mood that comes without any real payoff. Nothing other than the appearance of the shapechanging Raven about which you feel that the script have given far more explanations than it ends up doing. In actuality, all we have is a supposed Edgar Allan Poe secret history that ends up resembling a Jeepers Creepers film.