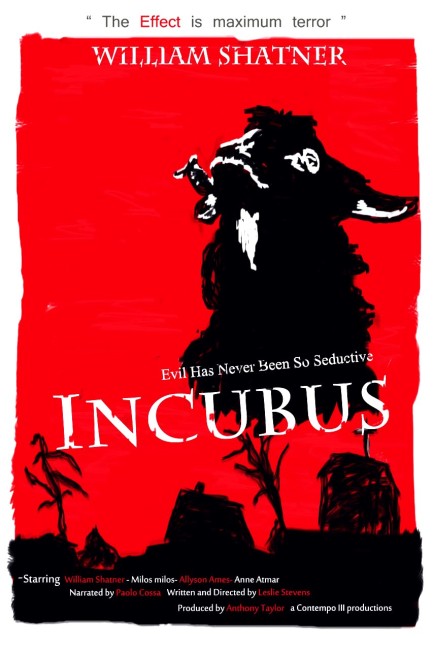 People come to the village of Nomen Tuum, seeking youth, beauty and healing that is reputed to exist in the waters of its wells. However, the village is inhabited by demonic incubi who tempt seekers to their doom. One temptress Kia is ambitious and seeks to tempt and corrupt a saint, despite warnings by her sister that saints will lure her away from Satan’s thrall with the power of love. The man she chooses is a wounded soldier Marc. Kia is easily able to cause Marc to fall in love with her but then begins to falls for him herself. Meanwhile, her sister raises a succubus in male form to stop the two of them.

Incubus – not related or to be confused with the later horror film Incubus (1982) about a demonic rapist – was the first feature film from Leslie Stevens. Stevens had previously worked as a tv producer on shows like The Virginian (1962-71) and the cult science-fiction anthology series The Outer Limits (1963-5) and had directed a couple of very obscure low-budget films.

The main novelty Incubus has in filmic annals is that it was the first (and so far only) film made in Esperanto. (It is incidentally the only film other than Derek Jarman’s Sebastiane (1976), which was made in Latin, and up until Mel Gibson’s The Passion of the Christ (2004), which was filmed in Latin and Aramaic, to be released subtitled in its country of origin). Esperanto was invented by Polish-born Ludwig L. Zamenhof in 1887 and intended as a universal language, designed to be easy to learn through simplified transitives and plurals. There was a brief fad for Esperanto in the 1950s. Although Esperanto websites do estimate there are around two million speakers worldwide, Esperanto failed to do anything other than catch on as an academic novelty and among a few fanatical prostheletists.

And neither for that matter did Incubus. It showed at one or two film festivals and bombed. Leslie Stevens went on to produce other tv series such as The Invisible Man (1975), Battlestar Galactica (1978-9), Buck Rogers in the 25th Century (1979-81) but never directed theatrically again for another twenty-two years with the action film Three Kinds of Heat (1987), the only other film he would direct before his death in 1998. Incubus vanished to become no more than a footnote in psychotronic genre guides – one has, for example, yet to find a single review of the film that dated from the time of its original release – until it was rediscovered and revived in 1999.

Why Leslie Stevens chose to make a film in Esperanto is a mystery. Did he hope that Incubus would somehow spur interest and popularise the language, or was Esperanto intended to add exoticism in the film’s subject matter? Or was it done solely as an artistic novelty, like say Gus Van Sant’s shot-for-shot Psycho (1998) remake? The answer, to all intents, would appear to have been that Stevens was an ardent convert to the Esperanto cause and himself tried to set up language institutes.

The Outer Limits, of which Stevens directed several episodes, specialised in a farm of stark, psychological horror. However, that touch seems to have eluded Stevens here and Incubus is a dull film. The film was made on location in Big Sur, California. Everything has been shot as an exterior location – even the houses that appear in the film are abandoned buildings. The dialogue is laughably portentous in translation – although it is interesting to actually hear Esperanto, which sounds like Portuguese, being spoken. The film also offers the novelty of William Shatner, just before he found fame in Star Trek (1966-9), as the hero. It is amusing to see him do a typical Shatner performance, enunciating dialogue with random pauses for meaning, with the film’s alien-seeming dialogue.

The one other novelty that Incubus offers is seeing a vision of occult goings-on that was formed before Rosemary’s Baby (1968) and The Exorcist (1973). These later films tended to paint Satanism and the occult in terms of Catholicism and represent its manifestations via physical obscenities and novelty shock effects. Incubus contrarily has a more pure-hearted vision – with the occult being represented by blonde temptresses trying to entice saints to their doom. The dualism here is not about faith overcoming shock and obscenity but simply of evil being overcome by the power of love. Certainly, the representation of evil is laughably banal – the two temptresses never get up to much and the nastiest the film ever gets is the succubus brother trying the marry the hero’s innocent sister and force his way with her.