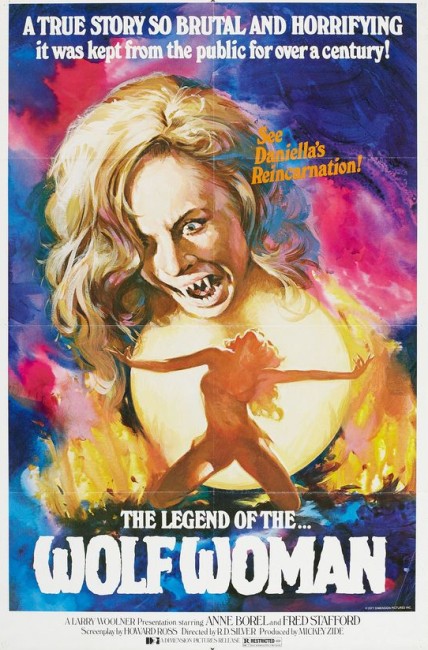 aka The Legend of the Werewolf Woman

Daniela, the daughter of Count Neseri, has been in a precarious mental state since she was raped at the age of thirteen. This is now exacerbated by her reading about her ancestor who was burned at the stake as a werewolf. Her sister Elena returns to Italy from the US where she has been studying nuclear physics. Daniela eavesdrops on Elena and her husband Fabian having sex. She then lures Fabian out into the grounds, offering herself to him but then turns and shoves him to his death in a quarry. She is placed in a hospital but makes an escape. As she flees, she kills all the men she comes across as they try to take advantage of her.

Werewolf Woman comes from the heyday of classic Euro horror cinema. The film has gained a certain word of mouth reputation and is apparently a favourite of Quentin Tarantino. It is the best remembered work of Italian director Rino Di Silvestro who made half-a-dozen other films, all in the softcore erotica field, his most well-known other work probably being Women in Cell Block 7 (1973).

The titles Werewolf Woman/The Legend of the Werewolf Woman are misleading as what we have is not a werewolf film. Certainly, in the opening scene, we see Annik Borel’s werewolf ancestor being hunted and burned at the stake by locals. On the other hand, it becomes apparent as the film goes on that this could just be the imagining of a told/read story. While there are some suggestion that Annik imagines she has inherited her ancestor’s curse (mostly gobbledygook from the psychologist character about ESP and reincarnation), she never actually turns into a werewolf in any of the present-day scenes.

Rather what we have is a film about a mentally disturbed woman who turns psychopathic at the thought or even sight of sex. In other words, a film that exists more in the territory of Simone Simon in Cat People (1942) than it does of Lon Chaney Jr in The Wolf Man (1941). The werewolf woman figure we see in these opening scenes is rather laughably one with white hair all over her body and giant nipples about the size of one’s middle finger.

Mostly, Rino Di Silvestro makes another of his softcore films. The film comes with a liberal number of scenes where both Annik Borel and Dagmar Lassender get their clothes off. Annik also takes a turn for the psychopathically disturbed and kills a variety of men but it is not a film where Di Sivestro provides a great deal of complexity either in terms of the psychology of the character or the ambiguity over whether Annik Borel is mentally disturbed or reincarnated from her werewolf ancestor. The final credits intriguingly claim that this is based on a true story.