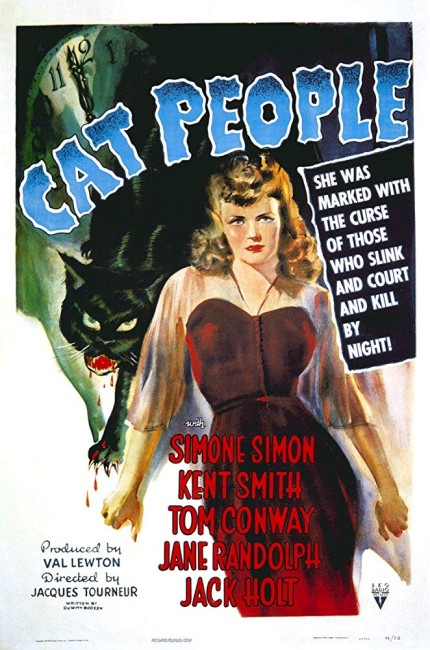 Architect Oliver Reed falls in love with beautiful Irena Dubrovna and they duly marry. But Irena refuses to give herself to Oliver, believing that there is something evil inside herself. She tells him of her Serbian ancestors who were reputed to be able to transform into cats when angered. As Oliver’s frustration and unhappiness grows, he seeks consolation in the arms of co-worker Alice Moore. A series of near-attacks on the two of them leave him wondering if Irena has not become jealously deranged or if maybe her Serbian legends are true and that she is turning into a cat person to avenge herself on them.

Cat People is a classic. It was the first film at RKO Radio Pictures from producer Val Lewton. With Cat People, Val Lewton essentially created a new type of horror film – the psychological horror film. In so doing, Lewton ended completely changing approaches to the horror film. He may well have been inspired by the Henry James novel The Turn of the Screw (1898), a ghost story that uncertainly hovers between being real or merely in the central character’s imagination.

In synopsis, Cat People could be any of a dozen similarly minded B-programmer werewolf variations of the same decade. The crucial difference was in Val Lewton’s approach to horror. Lewton took any overt manifestation of the supernatural away from the audience. Lewton’s dictum to his writers and directors was that doubt be cast, for both the characters and the audience, upon whether the supernatural menace was real or something imagined. Whether or not Simone Simon is a were-feline or merely imagining it, Cat People is cleverly ambiguous about, even at the very end. Certainly, no were-cat is ever seen – much growling is heard and the shadow of something is briefly glimpsed prowling through Kent Smith’s office, but that could always be the panther from the zoo to whose cage Simone Simon stole the key. Even cleverer is a subtext of explanation offered by psychologist Tom Conway that all but outrightly states that Irena’s belief that she is a were-feline could as much be a delusion caused by an extreme fear of sex.

The suspense scenes are structured with a careful ambiguity. There is the classic scene where Simone Simon pursues Jane Randolph and in Randolph’s imagination Simon’s footsteps appear to become an animal chasing her. The scene builds with an enormous sense of foreboding as to what is following her. Director Jacques Tourneur carefully misdirects us to look behind Jane Randolph throughout so that when a bus slams into the foreground with a hiss of brakes it is a genuine jolt.

There is also the celebrated swimming pool scene that creates the sensation of something present amid the rippling light reflected on the ceiling – nothing is ever shown, only suggested by growling noise and the suggestion of a shape prowling down the stairs. It is not a hugely subtle scene, but it does contribute to the haunted mood of Cat People, an atmosphere that seems to derive in large part from having every set light placed at ankle-height pointing upwards. Director Jacques Tourneur creates such a remarkably haunted mood that even a revolving door left rotating slightly is made to suggest something.

Undeniably, Cat People has dated. Certainly few of those raised in the Freddy Krueger generation have the patience to sit through the slow-moving opening and the sometimes awkward acting. However, that is not important. This is a horror film for thinking people.

Lewton’s approach of psychological and suggested rather than actual horror elements has been influential on a number of other films including the Jungle Woman series starring Acquanetta as a were-ape that began with Captive Wild Woman (1943) and other films like The Beast with Five Fingers (1946), The Catman of Paris (1946), She-Wolf of London (1946), Cult of the Cobra (1955), Cat Girl (1957), Night of the Demon/Curse of the Demon (1957), Night Tide (1961) and The Haunting (1963).

Director Jacques Tourneur next directed Val Lewton’s I Walked With a Zombie (1943) and The Leopard Man (1943), the abovementioned Night of the Demon/Curse of the Demon (1957), as well as the Grand Guignol comedy The Comedy of Terrors (1963) and the lost city sf film The City Under the Sea/War Gods from the Deep (1965).