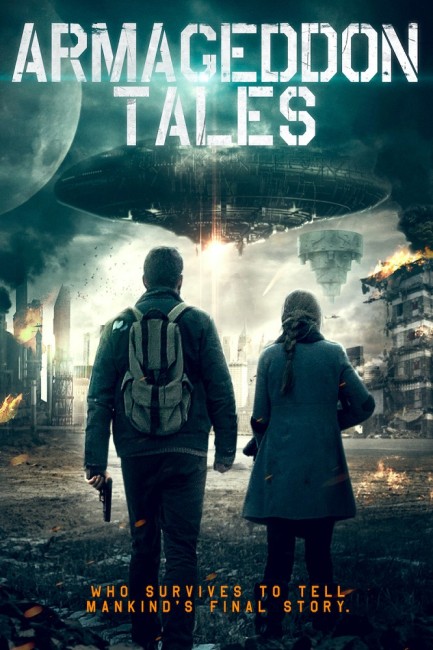 A pandemic has scoured the world killing many, while the rich elites of North America have built a sky city for themselves. 2031 Germany:- In Eastern Europe, Alexander scours the ruins searching for any food and water he can find. He comes across Joshua and they agree to travel together but Joshua’s lack of survival instinct infuriates Alexander. Alexander is also certain that something is following them. 2036 Canada:- Cal is paid by a mother to escort her young daughter Lex across the wasteland to the safety of one of the cities. All the way, their journey is beset by bogies. 2046 USA:- As Maya and Val search the ruins for supplies, they encounter Isaac. He offers them shelter for the night where they discover has his own fusion generator. A fight ensues as they try to persuade Isaac that they could power their entire community with the generator.

Armageddon Tales is an Anthology – a full-length film made up multiple stories. In this case, all of the stories are short films from three different directors around the world that are set After the Apocalypse. The film is united with a minimally sketched scenario that appears in the opening title cards about being set in a world after a pandemic, although pandemic is just a buzzword of the moment and features no further than that.

The episodes are given no names and are only listed by the year and country of their setting. The first of these comes from German commercials director Kaleb Lechowski. I was absorbed in the world that Lechowski creates with impressive visuals of the post-apocalyptic landscapes – of David Masterson outlined against vast tunnels, of ships abandoned in the desert and the like. The episode looks great.

The drama is between hardened survivalist David Masterson and the more inexperienced Seumas F. Sargent where the tensions between the two make the drama of the piece. Lechowski gives momentary glimpses of tall hooded creatures lurking, although what they are is never clearly spelt out before the episode reaches an abrupt end. This nevertheless is the best of the episodes.

The second episode comes from Canadian director Paul Plett. This takes a solid set-up – a ranger (Corey Rademaker) must make his way across the wasteland with a young girl (Meredith Rose) as companion. Plett does an okay job delivering this but the episode never quite works with the dramatic satisfaction you feel it should. There are also bogies lurking about where it is not entirely clear if these are infected persons or even zombies.

The third episode comes from American director Jonah Schwartz. This is the weakest entry, consisting of nothing more than two girls (Manni L. Perez and Jenna Sanchez) arguing with Jeremy Dash over whether he has the right to use his fusion generator to power his home or whether it would be better served powering their community. There is not much more to the episode than that.