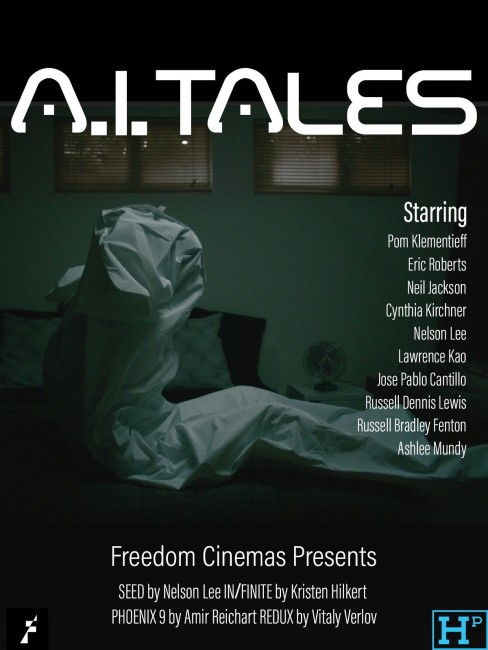 The Seed Initiative:- In the future, it has been decided that the people will be culled to keep the population down. On his 40th birthday, Nathan prepares to say goodbye to his loved ones. In/finite:- Jane remembers back on her last meetings with friends and family as she signs the papers before leaving them. Phoenix 9:- The world is devastated by nuclear war. Some years later, a group of people trek through the desert wastelands in search of promised sanctuary. Redux:- As armed soldiers try to break through the doors of his laboratory, a scientist attempts to communicate with himself in the past.

A.I. Tales is a science-fiction anthology film. Unlike other multi-director works of recent years such as The ABCS of Death (2012) and V/H/S (2012), this was not made by a producer bringing a group of directors together and giving them the funds to make a series of short films on a common theme. In this case, the film was compiled by its distributor who simply obtained the rights to four short films that had been made by various directors around the world between 2014 and 2017, gave the film a united title and released it as an anthology. (For greater detail on the genre see Anthology Films).

What should be noted is that despite the title A.I. Tales, none of the episodes actually feature any Artificial Intelligences – a robot is seen in the background of the Phoenix 9 episode and that is it. It is quite possible that it was named such to exploit the popularity of Artificial Intelligence themes in the late 2010s with films like The Machine (2013), Automata (2014), Chappie (2015), Ex Machina (2015) and others.

The Seed Initiative (2016), also shortened to Seed, comes from Nelson Lee, who is Taiwanese born but resident in the US. Lee has had a number of acting credits since the early 2000s and has directed a few short films. This is one of the two episodes that has an appearance from a recognisable actor – namely Pom Klementieff who gained fame as Mantis in the MCU. The Seed Initiative is a brief piece with Lee as the lead character holding a party where we realise he is bidding farewell to his friends and family. The end reveals that he is undergoing euthanasia in a future akin to Logan’s Run (1976) where people are put to death for the purposes of population control. The episode is passable but feels too slight to make any impact.

In/finite (2017) comes from US director Kristen Hilkert who co-writes the episode with the star Ashlee Mundy. This is probably the best of the episodes in many respects. It follows two parallel storylines – one with Ashlee Mundy in an office as she is asked to sign a contract and the other consisting of flashbacks to memories of friends and family as she spends her last moments with them before she departs (for where it is not quite clear). The performances from Mundy and the other are all fine and Hilkert directs with an instinctive grasp for the nuance of the interactions. The puzzle that comes is trying to work out why it is included as part of a science-fiction anthology before [PLOT SPOILERS] the end twist reveals that Mundy is departing as part of an expedition to land on Mars.

Phoenix 9 (2014) comes from German director Amir Reichart. This starts with the depiction of the outbreak of nuclear war (in some fairly good effects) and then cuts forward to an undetermined number of years later where a group of survivors, which include a former billionaire among their number, trek through the desert wasteland. They eventually come to a refuge where a hologram is activated and shows the pod ships that will transport them to a palatial orbiting space station. The episode ends with the realisation that while there are eight people in the group, there is only room for two in the pods.

This is an episode that seems to have its emphasis all wrong. The trek through the desert is not that interesting and the sort of thing that other After the Holocaust films have covered extensively. What is more interesting is the arrival at the destination. The episode concludes with the survivors realising they are going to have to choose amongst themselves who gets to go in the pods. This is surely a story that ends just before it reaches its most dramatically interesting parts – the choices and no doubt fighting amongst the group as to who gets to go on to the station.

The final episode Redux (2015) comes from Russian director Vitaly Verlov who is elsewhere a visual effects artist. The episode features a brief single scene, unspeaking appearance from well-known actor Eric Roberts. This is also the shortest of the episodes, coming in at only nine minutes. It concerns scientist Russell Bradley Fenton who is at siege as armed security forces are attempting to break in through the door of his laboratory (although it is not initially clear why) and his urgent efforts to transport a message through a device to what we eventually find is to his self in the past. This is an episode that feels as though it would have been far more effective if it had had a much longer running time.