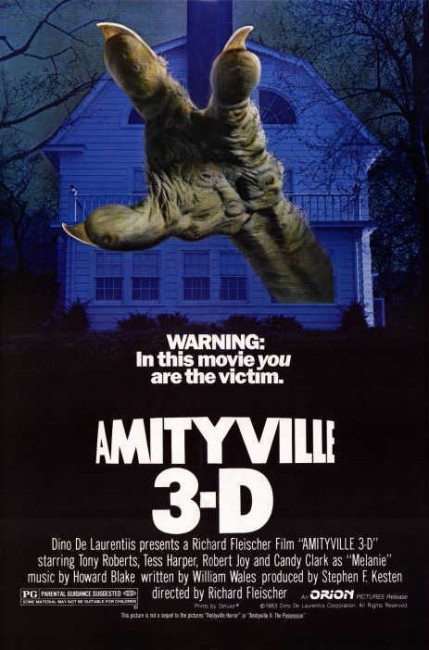 aka Amityville: The Return

John Baxter, an investigator of psychic frauds for an expose magazine, debunks a fake medium racket operating in the Amityville house. He then discovers the property is going cheap due to the house’s reputation and buys it, sceptical of its history. Once moved in however, he is readily pressed to find explanations as things supernatural start manifesting and people begin dying.

This is the third of the Amityville films, following on from the big success of The Amityville Horror (1979), which was based on a book that purported to tell the true story of a haunted house. Italian movie mogul Dino De Laurentiis then took over to make the first two sequels. This was the second of them and is a tawdry production with little to recommend it. De Laurentiis’s first sequel Amityville II: The Possession (1982) is a much more entertaining B movie.

Amityville 3-D was made to exploit the short-lived 1981-3 revival of the 3D fad, following the success of Comin’ at Ya (1981). Director Richard Fleischer, better known for fine genre films like 20,000 Leagues Under the Sea (1954) and Fantastic Voyage (1966), is a veteran of the original 1950s 3D fad and at least attempts to use the 3D for something more than shock effects and manages to create a certain amount of atmosphere by use of depth effect. (Although, the video and tv release where Amityville 3-D is screened flat today robs it of even these small plusses).

Nevertheless, even a long-serving director like Richard Fleischer cannot salvage the tiresome plot and seems unable to milk proceedings for any worthwhile suspense. Tony Roberts, who looks like an aging Maxwell Smart, is dogged, but Candy Clark proves the warm surprise of the piece. However, in a major miscalculation, she is disposed of before she gets the chance to become the love interest. One had hope that that the destruction of the house at the end would spare one the possibility of an Amityville IV, however the series limped on for another five films.