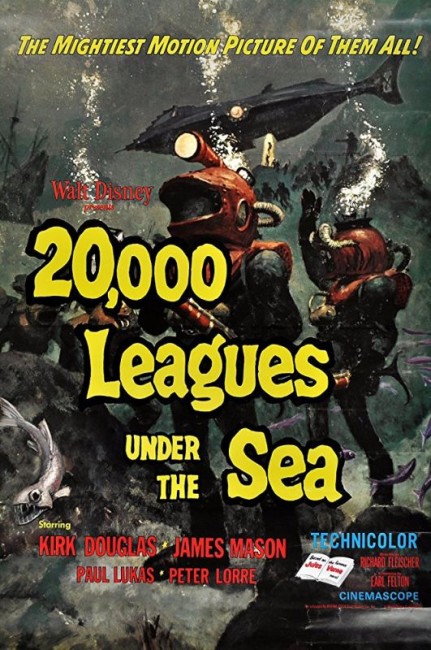 It is the 1860s and the seas are being terrorized by reports of a monster that is destroying shipping. The US government dispatches marine-life specialist Pierre Arronax aboard the warship Abraham Lincoln to investigate. After a fruitless search, they are about to give up when they come upon a sinking ship that has been attacked by the monster. They fire upon the monster but it then turns and rams them. Arronax, his assistant Conseil and harpoonist Ned Land survive the sinking and discover that the monster is in fact a submarine. The captain Nemo grudgingly invites them aboard. Nemo reveals that he has built this atomically powered submarine, which he calls The Nautilus, to embark on the single-minded mission of destroying all ships of war.

Jules Verne (1828-1905) is regarded, along with H.G. Wells, as one of the modern founding fathers of science fiction. Born in the port town of Nantes, France, Verne developed a romantic love of travel and adventure. He even attempted to smuggle away to sea as a child by posing as a ship’s cabin boy. Verne settled down as a stockbroker but his fame began in 1892 when he met publisher Jules Hetzel and proposed to him an essay on balloon travel. Hetzel instead suggested that Verne write the idea as a novel and the result was published as Five Weeks in a Balloon (1862). This began an extremely productive relationship with Hetzel who published all of Jules Verne’s works of fiction under the title ‘Voyages Extraordinaire’. Verne produced other famous works of adventure and speculation such as (best-known English-language titles given) Journey to the Center of the Earth (1864), From the Earth to the Moon (1865), Captain Grant’s Children/In Search of the Castaways (1867), Twenty Thousand Leagues Under the Sea (1870), Around the World in Eighty Days (1874), Michael Strogoff (1876), Hector Servadac (1877), Robur the Conqueror (1886) and Master of the World (1904), among many others.

A good part of Verne’s fiction wasn’t science-fiction and that is perhaps the essence of Jules Verne. His work consisted more of adventures and flights of fantasy concerning the geographic world. He invented remarkable flying machines, popularised the notion of the submarine and waxed imaginative about realms under the earth, under the sea and in orbit but largely he was writing adventure stories. He appropriated science to bolster his explanations but his works were flights of fantasy within geographic realms and never took the full flight of conceptually speculative fantasy that the work of his contemporary H.G. Wells did around the same time. It is worth comparing, for example, Jules Verne’s From the Earth to the Moon with H.G. Wells’s The First Men in the Moon (1901) – where Verne concerned himself with the building of the projectile and launch and little at all about the world that might be encountered on The Moon, Wells swept such aside with an imaginary science invention and centred the story around the alien society encountered on The Moon.

20,000 Leagues Under the Sea was made by Disney. The 1950s was a period where Disney were expanding away from being solely an animation studio and were starting to make live-action films. During this time, they made a number of colour adventure films, as well as a series of theatrically released nature documentaries. Like Jules Verne, Disney approach 20,000 Leagues Under the Sea not so much as a science-fiction film but as an adventure film. It should if anything be grouped amid the adaptations of other classic adventure stories that the studio made during this era including Treasure Island (1950), Rob Roy (1953), The Sword and the Rose (1953), Davy Crockett, King of the Wild Frontier (1954), Old Yeller (1957), Kidnapped (1960) and Swiss Family Robinson (1960).

In adapting Jules Verne’s novel, Disney were faced with a certain problem. When Jules Verne had written the book of 20,000 Leagues Under the Sea, the notion of a submarine was still science-fiction; in 1954, the idea of a submarine had been commonplace for more than a couple of decades and no longer held any amazement for audiences. The ingenuity of the solution was to cast 20,000 Leagues Under the Sea as a period piece and set the film amidst the great Victorian Age of Engineering.

Jules Verne adaptations up to that point had almost all been set contemporary and it was Disney’s 20,000 Leagues Under the Sea that placed Verne and Captain Nemo in a fantasy setting of Victorian gaslight technology, something that has been followed by every single Verne film and Verne pastiche writer since – something that would later be defined as part of the essence of Steampunk.  Emerging from the Disney team’s design shop, The Nautilus is an amazing marvel of Victorian technology on screen, outfitted with pipe organs, iron bulkheads, elegant brass fittings and wrought curlicues.

(It was also 20,000 Leagues Under the Sea that created the idea of the Nautilus being an atomic submarine, something that was never present in the Verne book. There was some amusement to this when the US Navy launched the world’s first atomic submarine in 1954 and named it The Nautilus, mistakenly thinking that the idea came from Jules Verne rather than the Disney film).

Disney lavished a then substantial five million dollars on 20,000 Leagues Under the Sea and create a superlative A-class production. The director hired was Richard Fleischer, who had emerged in the 1940s with thrillers such as The Armored Car Robbery (1948), The Narrow Margin (1952) and the Western Arena (1953) and would go onto make a number of adventure films. (See below for Richard Fleischer’s other films). [Richard Fleischer was in fact the son of Max Fleischer, the director of (Gulliver’s Travels (1939) and numerous Popeye and Superman shorts, who was Walt Disney’s principal rival during the 1940s].

Richard Fleischer mounts 20,000 Leagues Under the Sea as a spectacular adventure film. He makes full and lavish use of the Cinemascope screen and the Technicolor process – the underwater photography is beautiful. In a full cinematic screening today, the colour of the film looks amazing in ways that modern films have completely lost. The special effects still succeed in standing up, bar the odd grainy process shot and the slightly rubbery squid. James Mason gives a marvellously brooding performance as Captain Nemo. The only quibble is in the casting of stilted Paul Lukas as Arronax and Kirk Douglas, who seems to have strayed in from another film altogether and plays with a bumptious lightheadedness more appropriate to a drunken sea shanty. These minor points aside, 20,000 Leagues Under the Sea is a classic.

The success of 20,000 Leagues Under the Sea created a a fad for other Jules Verne film adaptations. 20,000 Leagues Under the Sea was followed by the Around the World in 80 Days (1956), which won its year’s Best Picture Oscar and introduced the light-hearted buffoonish tone that most of these other Verne adaptations took, Karel Zeman’s charmingly antiquarian The Fabulous World of Jules Verne (1958), From the Earth to the Moon (1958), Journey to the Center of the Earth (1959), Master of the World (1961), Ray Harryhausen’s Mysterious Island (1961), Valley of the Dragons (1961), Disney’s In Search of the Castaways (1962), Irwin Allen’s Five Weeks in a Balloon (1962), Jules Verne’s Rocket to the Moon/Blast Off/Those Fantastic Flying Fools (1967), Zeman’s The Stolen Airship (1967), On the Comet (1970), and The Light at the Edge of the World (1971). Most of these followed 20,000 Leagues Under the Sea in setting the story in the Victorian period, although increasingly the films became more buffoonish and silly.